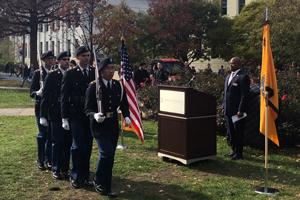 At American University’s fourth annual Veterans Day ceremony on Friday, November 8, Tony Hollinger, US Marine Corps veteran and director of military-affiliated student support and special initiatives at the Office of Campus Life, reminded the crowd why Veterans Day has no apostrophe. “This is not a day that is owned by veterans, nor even solely focused on veterans, but a day that celebrates veterans,” he said.

Hollinger also expressed appreciation for the “connection, communication, and collaboration” demonstrated by the student groups involved in planning and executing this year’s event. Among them were AU College Democrats and College Republicans, who partnered to provide a letter-writing station where attendees could compose thank-you notes for hospitalized veterans and patients at Walter Reed National Military Medical Center. Representatives of the Delta Gamma fraternity distributed candy, along with information about the organization’s philanthropic effort, Service for Sight: Joining Forces, which is dedicated to military veterans with vision loss and impairment.

Prior to offering the benediction, Heath said a few words about his childhood, the first ten years of which was spent “on Army posts from Washington state to West Germany.” With a father who retired as a sergeant first class, Heath knows firsthand the sacrifices made by military veterans and their family members, as well as their value to society. “Let us be reminded that the uniform comes with a wealth of experience and knowledge that makes us a better community,” said Heath.

Returning to the podium, Nowak read “In Flanders Fields,” the poem by World War I veteran John McCrae whose imagery inspired the adaptation of the red poppy as a symbol of remembrance.

Fanta Aw, triple Eagle and vice president of campus life and inclusive excellence, took a moment to emphasize AU’s commitment to military-affiliated students. “You are part of the AU family, and your presence matters a great deal,” said Aw.