A major quest in Mars exploration is hunting for atmospheric gases that can help us understand the past and present water inventory of the planet, to determine how much water was on Mars in the past, and if any water reservoirs could be accessible for future human exploration on the ‘Red Planet.’

A team of scientists, including American University Research Assistant Prof. Giuliano Liuzzi, published research on two new findings: the detection of hydrogen chloride in the atmosphere, a gas that signals a new kind of chemistry on Mars; and discoveries about Mars’ water that provide further insights into how Mars’ climate evolved. The two findings are published in the journal Science Advances, based on data collected by the European Space Agency-Roscosmos ExoMars Trace Gas Orbiter, a spacecraft that launched in 2016.

Liuzzi, also of NASA’s Goddard Space Flight Center, is one of the lead scientists of the investigation about Mars’ water loss and climate evolution. Liquid water is once thought to have flowed across the surface of Mars as evidenced in the numerous examples of ancient dried out valleys and river channels. Today, it is mostly locked up in the ice caps and buried underground. Mars is still leaking water today, in the form of hydrogen and oxygen escaping from the atmosphere.

Understanding the interplay of potential water-bearing reservoirs and their seasonal and long-term behavior is key to understanding the evolution of the climate of Mars. This can be done through the study of water vapor and ‘semi-heavy’ water (where one hydrogen atom is replaced by a deuterium atom, a form of hydrogen with an additional neutron). The research reveals the path of water vapor and semi-heavy water as they rise into the atmosphere with a level of detail not possible before. For the first time, scientists can watch this process fully in three-dimensional view. 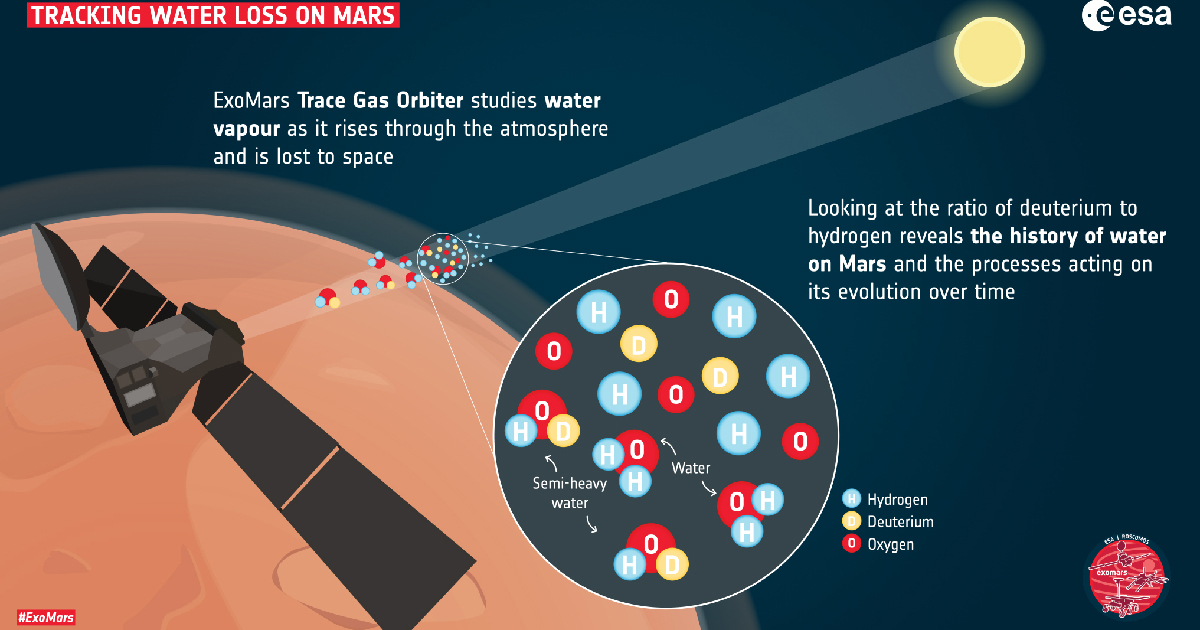 By studying this, researchers learn the history of water on Mars, and how water loss evolved over time. Liuzzi said the new findings confirm that large amounts of water have been lost over time. ExoMars data collected between April 2018 and April 2019 also revealed accelerated water loss during the seasonal heating of the southern polar ice cap and during dust storms, one of which in 2018 extended on a global scale.

“Observing how water rises in the atmosphere during a global dust storm was very revealing,” adds Liuzzi. “This allowed us to confirm that these intense storms can dramatically affect how water escapes on Mars.”

Liuzzi’s contributions include measuring the deuterium to hydrogen ratio of water, or D/H, a metric that researchers used in their analysis of the data from ExoMars. Liuzzi is a member of one of two teams in charge of data investigations involving one of the two spectrometers onboard ExoMars.

According to Geronimo Villanueva, of NASA’s Goddard Space Flight Center and lead author of the paper describing the water result, the research will allow for testing “potential new reservoirs of water on Mars.”

At AU, Liuzzi is a member of AU’s Institute for Integrated Space Science and Technology, established in 2017 to expand and create research and educational opportunities for students, staff, and faculty in the areas of astronomy, astrophysics, and heliophysics, in the highly interdisciplinary fields of planetary science, astrobiology, and astrochemistry, and in the applications of physics, engineering, computer science, data analysis, and mathematical modeling to space science and technology.

Many ISSTI members like Liuzzi are scientists at NASA Goddard. AU students have the opportunity to work on ISSTI research projects at both AU and NASA Goddard, which is located just outside Washington, D.C. A recent AU graduate joined ISSTI as a full-time research associate and then went on to be hired at Goddard as an engineer, working on the laser for an octocopter drone being designed to explore Saturn’s moon Titan. Another AU student is working full-time at NASA Goddard on instruments for a planned return to the Moon.