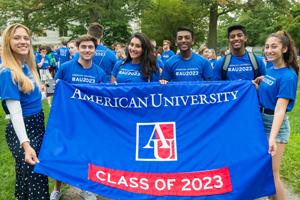 Welcome to campus, American University Class of 2023! Here’s our annual snapshot of the diverse group of first-year students at AU. It’s a breakdown of who they are, where they’re from, and what they’ve achieved to get to here.

In addition to the 1,806 freshmen, AU welcomes 332 transfer students this fall.

The typical first-year student was born in 2001. Take a glance at what happened then, what’s happening now, and what’s changed over the past 18 years.

2001: Al Qaeda carries out the September 11 terrorist attacks, killing nearly 3,000 people in New York, Virginia, and Pennsylvania. In response to the 9/11 attacks, the US invades Afghanistan.

2019: The Trump administration is reportedly considering a deal to withdraw most US forces there.

2001: British Prime Minister Tony Blair and his Labour Party are re-elected in a landslide.

2001: Legendary race car driver Dale Earnhardt dies in a crash at the Daytona 500.

2019: Dale Earnhardt Jr. and his family survive a plane crash in Tennessee.

2019: The controversial Schilling is now reportedly mulling a run for Congress.

2019: “Old Town Road” by Lil Nas X sets a record for most consecutive weeks atop the Billboard Hot 100.

2001: The first in the Harry Potter film series, Harry Potter and the Sorcerer’s Stone, is the year’s highest grossing movie.

2019: Harry Potter and the Cursed Child is the first non-musical play to gross over $100 million on Broadway.