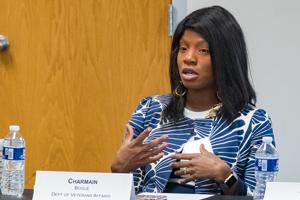 A morning roundtable discussion cohosted by American University and Student Veterans of America brought faculty, staff, administrators, alumni, and students from several DC-area universities together with members of the veteran community in Butler Board Room on October 23. The landmark gathering—organized by Tony Hollinger, director of military-affiliated student support and special initiatives with the Office of Campus Life, and Will Hubbard, chief of staff at Student Veterans of America (SVA)—gave AU an opportunity to consider important questions about how diversity and inclusion apply to student veterans.

"The hope is [that] universities will walk away with the idea of making a commitment to veteran inclusion," said Hubbard, SIS/BA ’11, who also serves on the President’s Council on Diversity and Inclusion at AU.

In his opening remarks, Jared Lyon, SVA’s chief executive officer, credited the original GI Bill with “democratiz[ing] higher education.” Prior to the Servicemen’s Readjustment Act of 1944, Lyon said, fewer than 7 percent of American adults held a bachelor’s degree or higher, so “unless you were a white male born to parents who went to college, there was almost no chance that you would go to college.”

Founded in 2008 to provide military veterans with the resources and support necessary to succeed in higher education, SVA is one of the largest student organizations in the US and currently boasts 1,528 chapters with 754,000 active student members and 2.1 million alumni. Lyon stressed the importance of going beyond identifying as “veteran friendly” to become “veteran inclusive.” Friendliness is difficult to measure, he pointed out, while “inclusion is [about] trying to ensure that all of us can bring our whole selves to whatever endeavor we face.”

AU provost Daniel Myers recalled with enthusiasm his encounters with student veterans during his time as a professor. “I always loved having veterans in my class,” Myers said. “I knew they were going to bring something special to the table in terms of maturity, focus, and life experience.” He also acknowledged the obstacles student veterans face in higher education: “It was challenging sometimes to fit in and try to be a part of what was going on.”

One of the first hurdles student veterans confront is self-identifying as veterans. “It’s less a fear of being targeted and more of being labeled as damaged, broken, or not able to do something,” Lyon said. “Or they may have had a negative experience in their own time in the military and are not willing to associate with that time. It’s complex.”

The complexity of intersecting identities emerged as a theme of the roundtable.. In addition to identifying as people of color or members of the LGBTQ community, student veterans often fall into the broader category of post-traditional learners. According to the National Center for Education Statistics, the vast majority of enrolled undergraduates are older than 25, hold full- or part-time jobs, may have spouses and children, and often commute to school. While this population deals with additional life challenges, it can be difficult to maintain connections to their community. Lyon believes veterans represent the “tip of the spear” for the surge of post-traditional learners projected to pursue higher education by 2025.

Underscoring the fact that student veterans are diverse in age as well as other demographic details, Lyon regaled attendees with the story of Alfonso Gonzales, the World War II veteran who graduated from the University of Southern California at age 96. When his granddaughter discovered that he was one course shy of earning a bachelor’s degree in zoology, Gonzales refused to accept that he had committed “academic stolen valor.” He returned to USC, completing the requirements for his degree with a class in autobiographical writing.

Representatives from area institutions reported on their efforts to establish inclusive settings for student veterans. Andy Sonn, director of military and veteran student services at George Washington University, introduced the topic of campus climate surveys and their value in measuring student veterans’ experiences, emphasizing that “mere numbers on campus do not equate to success, to a student feeling comfortable.”

Amanda Taylor, assistant vice president of diversity, equity, and inclusion with the Office of Campus Life at AU, mentioned the university’s recent campus climate survey for students, and how the question about military affiliation covered both veterans and their families.

OCL’s Hollinger added that AU is in the process of forming an affinity group for faculty and staff who identify as veterans. “It would be an opportunity for [us] to come together, just as our students come together around the SVA chapter. We are literally at the starting mark, but it is something we are leaning forward into.”