As students gathered into Mary Graydon Center 200 on the evening of Feb. 12, the sounds of barber clippers buzzing filled the air as AU students got fades, tapers retouched, or a shape-up. This was unlike any event most of the students attended on campus. The scene looked more like a Saturday morning at the barbershop, than a meeting space in Mary Graydon Center.

"Cutting Edge Conversations: Rethinking Masculinity and Race" was co-sponsored by the Center for Diversity and Inclusion (CDI), The Wellness Center, Men of Empowerment and Excellence (ME^2), and the Black Wellness Coalition. The event was part of the ongoing dialogue by the Wellness Center on defining masculinity, headed by Maya Vizvary, the Center's Sexual Assault Prevention Coordinator.

"Toxic masculinity is one of the root causes of rape culture. This is our attempt to address the root cause of sexual assault. Try to create a shift in culture from rape culture to consent and healthy relationships," Vizvary said.

With technical assistance from the organization Men Can Stop Rape, Vizvary embarked on establishing community conversations on masculinity at AU. The Wellness Center hosted three events during the fall semester, including a major event during Welcome Week. They later hosted two events with members of the Interfraternity Council and the LGBTQA+ community. Both talks were very encouraging, "Students were very open and vulnerable with each other about their experiences," Vizvary said.

Shannon Smith, Assistant Director of Student Success and Transition in CDI, attended the first conversation on masculinity and was inspired to do an event that addresses black men at AU. Smith reached out to Vizvary to discuss what they could do, and she sent him a video of black men discussing various topics in a barbershop. "In black culture the barbershop is the place where men have open and honest conversation about what is going on in their lives," Smith said. "So, what better way to do that than to create a barbershop like set up, which is familiar to black men." 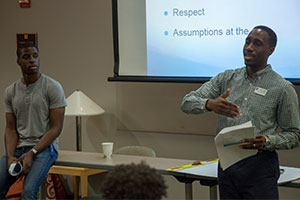 Kerobo and Smith lead the discussion

Smith approached ME^2 President Joshua Kerobo, who coincidentally had a similar idea inspired by an event hosted by the Black Male Initiative at George Washington University. "Getting a haircut can be a challenge for black men because of AU's location," Kerobo said. "Shannon called me into his office one day and posed the idea to me, which was amazing because that was exactly what I was thinking."

Smith then reached out to the newly formed Black Wellness Coalition, and the event was created.

Black men are often portrayed in a negative light in media and many AU black male students feel this burden, in addition to their studies. Black men only account for 5.2% of AU's undergraduate students, and for many, and because of the small representation many are placed in difficult situations. "The negative stereotypes and narratives placed on black men," Kerobo said, "causes a lot of black men to go back into their shell."

"While there are a lot of deficits with black males, we often do not discuss the positives that black males are doing," Smith said. 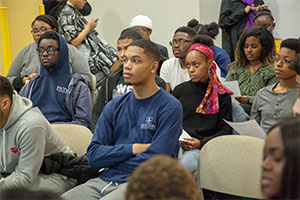 Students listen to the facilitators

Many of the students in attendance were pleased with the event. Sophomore Genáe Hatcher, founder of the Black Wellness Coalition, was impressed by the tone of the conversation. "We always discuss toxic masculinity, but it was great to learn about healthy masculinity and the solutions to the problem," Hatcher said.

While the group was not able to come up with a working definition of masculinity, they were able to come together for fellowship and an honest dialogue with the intention of promoting change. "I want students to leave thinking more critically about masculinity and how it affects how they move through the world," Vizvary said.

"We want the students to connect with other students there and continue these conversations after this event. And having a community that these men can be open and vulnerable with, support each other on this journey, and hold each other accountable," Smith said.