1. Because Bagpipes — What’s the deal with AU’s commencement bagpipers? Well, the tradition goes back to 1980, when the university president at the time decided to surprise students by replacing the tune “Pomp and Circumstance” with a procession of the Scottish instruments. He believed the typical graduation song was too reminiscent of high school. The bagpipes stuck, now extending to freshman convocation ceremonies in order to bookend the AU student experience.

2. Location, Location — Over the past century (that’s right, AU’s been graduating students for about a century), commencement has hopped around various venues throughout Washington, D.C. In addition to ceremonies taking place outdoors in front of Hurst Hall or on the now-athletic fields, AU hosted graduation at the DAR Constitution Hall and the Washington Hebrew Congregation.

It wasn’t until 1988 and the opening of Bender Arena that graduation ceremonies finally settled in the spacious sports complex where they continue today. 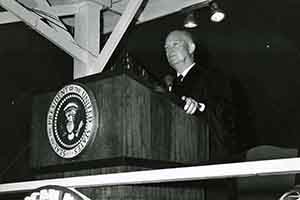 3. Star Power — With a student body so politically active, commencement at AU is bound to attract some high caliber speakers. Since graduating the first class of undergraduates in 1927, commencement has seen the podium occupied by the likes of U.S. Presidents Dwight D. Eisenhower, John F. Kennedy, and Bill Clinton; Thurgood Marshall and other Supreme Court justices; former Prime Minister of Israel Yitzhak Rabin; and numerous other political heavy hitters.

Not to be outdone, the School of Communication has hosted broadcast journalist Walter Cronkite, Hollywood producer Barry Levinson, and—just last year—TV personality Katie Couric, to name a few. Check out this year’s list of speakers. 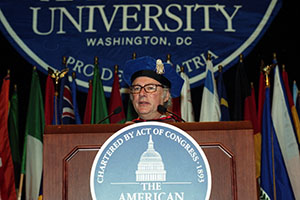 4. All Together — AU now holds separate commencement ceremonies for each of its schools and colleges. This year, five will take place in Bender Arena over the course of two days, and seating inside will likely be at max capacity for each. The Washington College of Law will hold its ceremony separately a week later. Until 1969, however, all of AU graduated together, in one large event. In 1969, there were seven ceremonies in total—including those for the now-defunct School of Nursing and College of Continuing Education—and all of them took place on one day, from the campus amphitheater, fields, and Kay Spiritual Life Center to the Metropolitan Memorial United Methodist Church across the street.

5. Brace Yourselves, Winter Commencement — For the first time in more than a decade, AU will host winter commencement on December 16, 2015 for August and December graduates. The move comes as the university community grows rapidly while also welcoming more nontraditional students and those who might graduate on different timelines. So, if you're finishing your degree soon, don’t worry; AU’s got you covered this winter.