Celebrate the 50th anniversary of the dedication of the Kay Spiritual Life Center on Nov. 18 at 2 p.m., with a keynote by Rev. Paul Brandeis Raushenbush, executive editor of Global Spirituality and Religion for The Huffington Post.


Alex Gamcsik believes he spends more of his time at AU in the Kay Spiritual Life Center than in class. After joining AU Methodists, he realized the interfaith space provides an educational experience all its own.

“I didn’t even know many of these religions existed, to be honest,” he recalled. “There was just so much fascinating stuff to learn.”

The School of Public Affairs junior now serves as president of AU’s Interfaith Council, which promotes dialogue and events across religions. In exploring the topic at AU, Gamcsik joins a tradition that now moves into its sixth decade of existence, as the Kay Spiritual Life Center celebrates 50 years on campus. 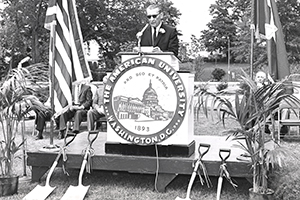 In 1961, local Jewish businessman and philanthropist Abraham Kay joined AU’s Methodist president, Hurst Anderson, in the idea of building one of the nation’s first interfaith houses of worship. 1960s Christianity in America was experiencing a movement toward Protestant-Catholic cooperation, but AU—a university with deep Methodist roots—wanted something more.

“They were prescient, if you will, about what would be happening in higher education in teaming up to create an interfaith space,” university chaplain Joe Eldridge said. “I see Christian churches all over the country that are being retrofitted to accommodate an interfaith community, and AU has had this for 50 years.”

With generous donations from Kay, the local Catholic archdiocese, and the Methodist church, this interfaith chapel became a reality. The 1961 announcement of the center alone drew attendance by the U.S. labor secretary, the governor of Maryland, the auxiliary bishop of the Catholic Archdiocese of Washington, and the ambassador of Israel.

Speaking of the revolutionary structure to be built, Anderson said, “My real hope is that this will become a symbol for interfaith relationship in the heart of the nation’s capital. It will become an example for people of good will to work together.”

The center’s now 24 faith groups, from Catholic to Hindu and Baha’i to Secular Humanist, prove strong testament to Anderson’s words.

Current Unitarian Universalist chaplain Charlotte Jones-Carroll was present for the structure’s dedication in 1965 as an undergraduate student in the School of International Service. She and her friends watched the 16-foot-tall bronze flame rise atop the building, which quickly gained the nickname “the flaming cupcake.” 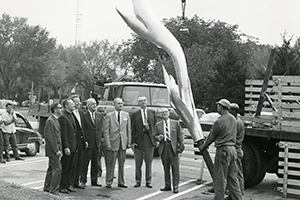 Then a member of the Interreligious Club Council, Jones-Carroll immediately recognized the importance of the new space.

“Kay is an integral part of the campus, and it was put where it is to send the message that the spiritual and social justice side of our lives is as important as the quantitative economic side, for example,” she said.

To that end, Kay has spent decades hosting a number of speakers, chaplains, and events that have placed it at the middle of social justice issues. From Pakistani Prime Minister Benazir Bhutto to civil rights activist John Lewis and even Baha’i actor Rainn Wilson from The Office, visitors have reflected Anderson’s desire for people of all walks working together both at home and abroad. Kay’s Table Talk Lunch series consistently features panels discussing human cooperation and rights.

At a university with many students dedicated to studying international engagement, Gamcsik believes the center promotes a truly well rounded education.

“We are a very political, international-focused school, and you can’t really understand social sciences like that without understanding religion and how people live through religion,” he said.

The center has witnessed and participated in a number of historic movements and moments. When AU and Ward Circle were a hotbed for Vietnam-era political dissent and rallies, the chapel served as a refuge for protestors, and some of its chaplains served as draft counselors.

“How you are in the world is very much an AU focus. The different faith traditions have, at different times, taken stands on social justice, or how you act in the world,” Jones-Carroll said.

The chaplains roster featured one of the first women to be ordained in the Episcopal Church alongside a British Methodist chaplain from then Southern Rhodesia who went on to become the first president of the new nation of Zimbabwe. 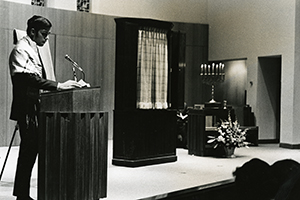 Aside from its spiritual support, the center has also developed strong ties to academics at the university. Chaplain Earl Brill started CAS’ American Studies department, while Eldridge helped found SIS’s Social Enterprise M.A. After an influx of students from the Middle East during the 1970s, SIS professor Abdul Aziz Said was instrumental in creating the center’s Muslim prayer room.

As AU’s student body continues to evolve to include all different cultures and faith backgrounds, the center will lead as one of the oldest spaces and spirits of its kind. With 50 years of history as a pioneer in interfaith efforts, however, the structure will still simply act as home for students like Gamcsik to gather and grow.

“Kay is just a place where there’s not a lot pressure to be someone else,” he said. “You can coalesce around a religion or a group of people and find a place to be yourself.”