Commencement season at AU also signals awards season on campus, as a host of graduating students gain official recognition for accomplishments that range from classroom triumphs to making AU a better community for all.

Read on to meet this year’s recipients! University leadership will present these awards to the recipients on May 8 at a President’s Awards Program and Reception.

For Kelly, the award is more about the institution than about his many successes. 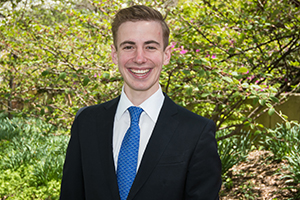 “It’s really a reflection of all the incredible opportunities and experiences I was able to have as a student at American University,” Kelly explained. “It didn’t take long for me to realize that AU was more than a school—it was a home.”

“It’s an honor,” Durgana said, “and it represents the appreciation American University has for the diversity of accomplishments that are possible here. It shows there’s not just one way to achieve an award. I’m grateful for the recognition.”

Also recognized with this graduate level award is Brendan Tunstall, a Behavior, Cognition, and Neuroscience Ph.D. student in the College of Arts & Sciences who has focused his extensive research on addiction. 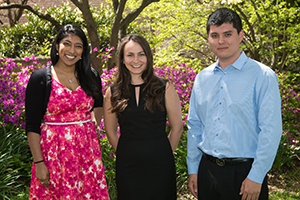 Campus Life’s Student Achievement Awards spotlight those students most actively involved in improving the university—just like the former students, staff, and faculty members whose names designate the 10 awards.

“I transferred in two years ago. For me to have been able to complete as much as I have in the last two years, it’s nice to be recognized for it with this award,” Gilbert-Schrag said. “Especially with her legacy as a person, it’s amazing thing to be able to follow in her footsteps.”

Cambodian student Essarayoss Mean earned the Carlton Savage Award by bridging cultural groups on campus. He hopes his success inspires future students to further his cause.

“I’m very honored,” he said. “It motivates you to do more hard work and encourages the new generation of students to integrate with international students and provide cultural understanding between communities at AU.”

Cj Murphy’s strides in the School of Public Affairs Leadership Program, as the 2015 Class Council president, and as co-captain of the Cheer Team garnered her the Stafford H. Cassell Award. While the School of Communication’s Adam Garret landed the Kinsman-Hurst Award for his support of student rights and responsibilities as director of the Student Advocacy Center. 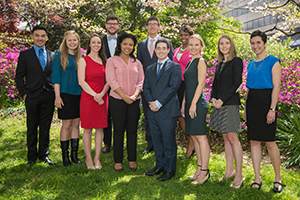 Community service advocate Diana Williams will accept the Bruce Hughes Award in recognition of her leadership rallying hundreds of students, staff, and faculty to participate in the Freshman Service Experience and MLK Day of Service.

Williams credits her late grandmother for her own generous spirit.

“She really contributed greatly to who I’ve become as a person in giving back to the community and leadership skills. I’m happy to receive this in her honor and to continue going in the direction that she was,” she said.

Her friend Chante Harris claimed the Harold Johnson Award for volunteer work with the child literacy programs JumpStart and D.C. Reads, as well as her involvement in promoting gender and racial equality.

Kogod School of Business student Nicholas Eng co-founded the nonprofit Unfused, which connects youth with college-age tutors via the web. For his efforts, he’s gained the Fletcher Scholar Award. He hopes the award will inspire others—particularly his staff of tutors.

“It’s good for the team that we have behind us to see that working hard does lead to being recognized,” he said. “It sends a good message to them.” 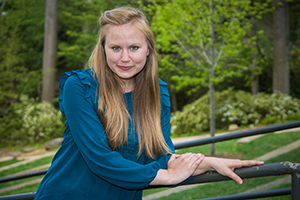 SIS’s Candace Evilsizor nabbed double honors for her work with refugee communities across the globe, earning herself the President’s Award and also receiving the Fletcher Scholar Award with Eng.

“I came into Kogod, and I never saw the potential that my professors would put me up for this award,” she said. “It’s just an honor to represent the Kogod community.”

“I am proud of what we were able to accomplish for the student body by creating lasting memories,” Thornton said. “I am honored in particular to receive the Catheryn Seckler-Hudson award, named after one of AU’s most influential pioneers and early campus leaders who contributed to much of what we know today as American University.”