Vice President, People and External Affairs & Counselor to the President 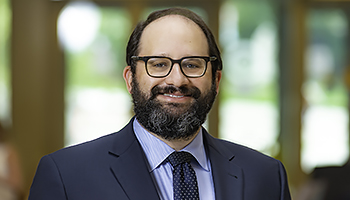 Seth currently serves as the Vice President of People and External Affairs & Counselor to the President of American University and as an adjunct professor of law at AU's Washington College of Law. At AU, Seth supervises the university’s offices of human resources, government and community relations, strategic planning, and equity & Title IX. He also oversees WAMU 88.5 FM.

Seth previously served as the Chief of Staff to the President of the University of California system, serving as the UC President’s top executive in the operation and administration of 10 campuses, five medical centers, three affiliated national laboratories, a statewide agriculture and natural resources program, and an operating budget of more than $31 billion. In this role, Seth managed an array of legal, operational, financial, policy, communications, and strategic issues throughout the UC system. While at UC, Seth also chaired UC’s Global Food Initiative, led the development of UC’s Public Service Law Fellowship Program, co-led negotiations and implementation of a long-term budget framework with the Governor of California, and spearheaded the creation of UC’s first systemwide Title IX office. He also taught immigration law and policy at the UC Berkeley School of Law.

Seth previously served as Deputy General Counsel and Counselor to the Secretary at the U.S. Department of Homeland Security (DHS). As Counselor, Seth was a top advisor to the Secretary and senior DHS leadership on matters related to immigration, privacy, civil rights, and civil liberties, including serving as co-lead for DHS on the development of the Deferred Action for Childhood Arrivals (DACA) program and comprehensive immigration reform in 2012-13. As Deputy General Counsel, Seth oversaw all significant litigation at DHS, including in the U.S. Supreme Court, other federal courts, and state courts. Seth also directed all rulemaking and other regulatory work conducted at DHS, coordinated with the Office of Management and Budget and other executive agencies on significant regulatory matters, and oversaw all immigration-related legal work conducted at DHS.

Prior to joining DHS, Seth worked in private practice, where his work focused on appellate litigation and election law.