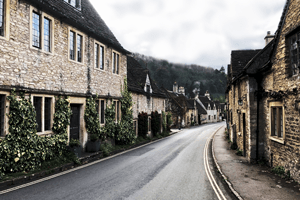 November 19, 2018 | Today marks the countdown until I make the 15+ hour trek home. Back to familiar places and faces and all of the things that I associate with home. 30-days until I bid farewell to Bath and walk away from the most educational, self-fulfilling, and eye-opening period in my life thus far. For the first time since arriving in the UK, I feel a sense of longing; not for the things I thought I would miss though; instead, a presumptive desire for the things I will ultimately leave behind. As I register for the courses I will take at American University this spring, I come to terms with the fact that what has become standard for me will not be so for very much longer. I think of the endless cups of tea and pasties I have consumed since my arrival. I laugh to myself about how the bus has yet to ever be on time and the fact that our monthly passes never quite scan correctly.

I realize that the familial banter and dynamics that the cohort has taken up will end once we are no longer contained to one classroom and shared apartments; perhaps this is what I will miss the most. Our never-ending card games, rowdy scrabble competitions, and quiet drawing sessions that last until the early hours in the morning. How we crowd into one kitchen, wrapped in duvets and sharing wire seats, to watch comedies on a crooked projector in which the volume is always slightly off from the picture. The ways we turned into something of a family; 22 students, none of whom share experiences or opinions precisely like the other, that decided to pick up their lives and take a chance on themselves. Truth is, I think that's worth something. 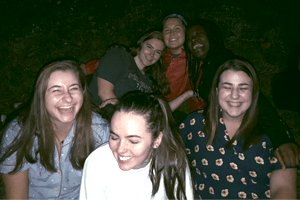 If there is one thing I have come to understand during my time here in Bath, it is that you do not need the stuff you thought at one time you needed to thrive; however, people and the relationships you make with them are truly of utmost importance. I believe that it is possible to move to a new place alone and completely reinvent yourself--though, Cornerstone Abroad in the UK has allowed me to do these things alongside individuals who have taught me more about myself, others, and the world we live in, than anything else.

Most days, I wish it would all slow down. I try to remind myself that if I'm not careful, this time in my life will slip into the past without me even realizing it. Today, I woke up to leaves that have been tinted in reds and oranges by autumn and breath that freezes in front of me as I huff past the cows and sheep I’ve grown accustomed to. I welcome the change as the slow burn of fall shifts to the gentle glow of winter; my life may be doing this as well. I’m not sure if I will ever be able to articulate the feelings I have had while living in Bath, nor explain the experiences the 22 of us shared; though, it is comforting to know that no matter where our lives end up, we will always remember this grand adventure we embarked upon with one another. 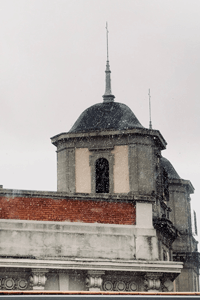 If I could pass on one bit of advice to the student I was nine months ago; a person eager to leave high school and start my life, but unsure about where this phase would begin, it would be to take the leap. Step into the world using both feet without knowing exactly where you’ll end up. Believe that you are the kind of person worthy of taking a chance on, after all, we did it, and so could you. It isn’t as glamorous as I once thought it would be, but, it’s so much better. 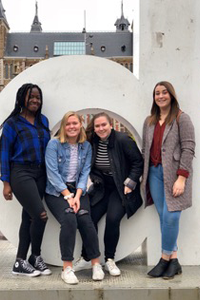 November 5, 2018 | As I write this, sixteen strangers, tucked into their bunks, lie breathing deeply and snoring lightly around me. The mattress above sags downwards as its occupant rolls over. I begin to wonder how I ended up in a position so intimate as the one of sleep while lying in a foreign country with a room full of drifters. The girl who rests on the bottom bunk across from me whisks her wispy blonde hair up into a bun and reads Hemingway under the dim light of her iPhone. A modern-day cliche that every young person who is desperate and full of longing to see the world fantasizes about. When she rises, she moves swiftly and confidently through the dark expanse of the room filled to the brim with the gentle noises of slumber--it’s like she has made it her home, this odd in-between place shared with others.

During my time in Amsterdam, I encountered a plethora of young women I was able to see myself in--despite the fact that I never knew their names, where they were from, and sometimes, I couldn’t even understand. The Spanish girls in the room next door in the hostel drape over one another, all arms and legs, as they speak in tongues I can only dream of being able to one day know. Lined up in a row as they pluck, primer, and plump, I make up elaborate tales as to how they ended up in the same place as me; as they gaggle, I realize I don’t know what it is that they are saying or what their mouths look like, but I don’t need to know any of these things to be sure that they are smiling. 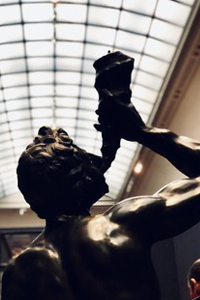 We strut down the street along the canals, my friends and I, single file with our arms flung out at our sides like teetering tightrope walkers, and beam while the city churns around us. Red lights we’d grown up hearing scandalous stories about gleam off the water, as girls in windows stare down at our young and unaware faces. I lock eyes with one of them, these ladies of the night, and find myself realizing, then, that we have far more similarities than differences; united under the unspoken codes of girlhood. And then there’s Lola. Lola who we thought was dead upon arrival but now walks towards me, all skin and bones and fur--even the cat here is but a drifting girl.

When I found out that I was to have a day off of my usual scheduled madness, I knew I wanted to travel to Amsterdam. A city I’ve always been completely and utterly fascinated with. While the Rijksmuseum and the Anne Frank House were surely sites worthy of awe, I found myself far more enticed by those who surrounded me. This program has allowed me to extend the bounds of the world that I was once confined to; moreover, the most important thing that college abroad has taught me so far is that the similarities between myself and others are far more prominent than our differences. See, the lessons I have learned sitting behind a desk or at a lecture are undoubtedly important, but, discovering how to overcome language barriers or unite under shared experiences that occurred a world apart are all the more valuable. 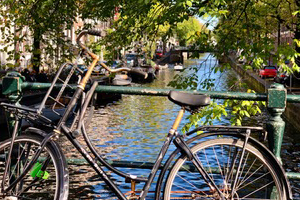 Now, laying in an unfamiliar bed kept awake by time zone changes, I think of Oregon. I remember back on the places I sought out solace within and the way that the leaves change in late October. I think of its rain and never-ending brick structures, and it’s too kind people. It’s then, in this moment of solitude in a room full of others, that I realize that home is indeed in your head. No matter where I end up, Oregon, and all of its oddities, flaws, and undeniable love, will always be with me.

I never did learn the name of the girl who stayed up until the early hours of the morning reading Hemingway; though I did realize that maybe here, it is enough to simply be a girl from nowhere in particular with a duffle bag and a bunk bed to call your own--if only for a night. 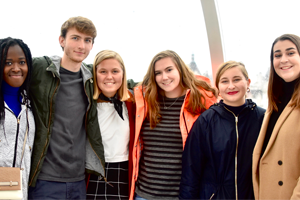 October 22, 2018 | In 36 hours, I experienced every emotion known to man. I grieved for my childhood as I watched the only place I knew grow desolate while sitting on a plane with not enough leg room. I felt my ego flood and quickly drain as I encountered, for the first time, the unfamiliar faces of those who would go onto being some of my best friends. I underwent the experience of my heart radiating joy and warmth while I thought of my future, and just as quickly, the shift and swell to sappy wallow at the thought of the immense unfamiliarity of it all. In my first 36 hours in Bath, England, I learned more about myself than I ever thought I would in the entirety of my college experience. Each day since then, I have continued to decide that I am willing to experience the loneliness and doubt because the payoff is far more beautiful. 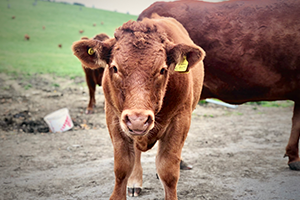 Now, we sit at the table, my friends and I, as the boisterous conversations of our British peers ring out into the evening, and wonder how we all ended up in this strange and fantastic place. Why we feel we’ve known one another for our entire lives, even though I can count the number of weeks since we met on one hand. We laugh over misplaced passports, missed bus rides, evening mishaps, and the way the cows (yes--Bath Spa University is home to students and cows alike) and their mooing act as a backdrop and cacophonous soundtrack to it all. Living and attending classes with the same 23 people allows you to get to know them on levels you may not want to; however, it also creates a common understanding and shared experience that unites like no other.

When I’m not frolicking through Bath, eating curly fries in the Student Union, or studying for hours on end, I find myself spending most of my time in the UK thinking about how I feel about being an American. British students ask questions about gun violence, Donald Trump, the Kardashians, and whether or not I’m proud to call the land of so-called freedom my home. As I watch events unfold an ocean away, I wonder if returning to Oregon in December will feel familiar or like an alienistic place; though, perhaps it isn’t America that is changing, but instead, me. Spending time in Europe has made me realize that while I may not be proud to be an American right now, I believe so fervently in the idea that young people are working to make it the kind of place worthy of pride. 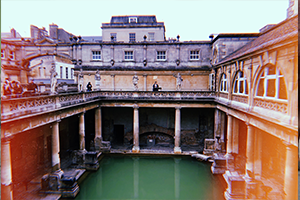 I could tell you about my classes, the way the Roman baths steam on a cold Friday morning, or how being truly on my own in a kitchen for the first time has lead to some unfortunate--albeit hilarious--disasters; truth is though, all of that is something you’ll experience in your own unique way if you choose to go on the most grandiose, eye-opening, and educational experience of your life. Closing in now on my first month in Bath, England, I look back on those first 36 hours and feel immensely proud of the person I was, though I know now, I am capable of so much more than I could have ever imagined then. No one ever tells you that college doesn’t play out the way it does in movies, that it doesn't happen gracefully; instead, that it’s all awkward, horrible, wonderful, and completely--oddly--right.

A brief list of things that I have been grateful for during my first month in Bath:

30-days until I bid farewell to Bath and walk away from the most educational, self-fulfilling, and eye-opening period in my life...