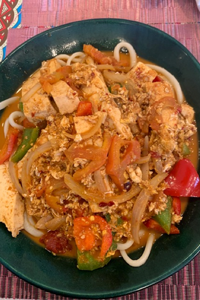 December 2, 2019 | First of all, major shoutout to Dolan Uyghur Restaurant for custom-making me this absolutely divine bowl of noodles that I desperately needed!

Anyway, on the internship front, I’ve been working on a number of new projects. I’ve spent the bulk of my time the past few weeks writing an extended research report on the evolution of United States digital education initiatives throughout the 21st century. I’ve also prepared a number of case profiles for Canadian cybersecurity workforce development programs as part of the same project.

However, the most interesting thing that I covered recently was a Stimson Center event on the concept of an offense-defense balance. The keynote speaker, Professor Eugene Gholz of the University of Notre Dame, defined the offense-defense balance as the cost of offensive forces required to overcome a particular level of spending on defensive forces. He argued that the geography of the Indo-Pacific region, where attacking forces strike from the sea and air against defending forces stationed on land, plus recent improvements in military technology increasingly shift the balance in favor of the defense in the Indo-Pacific.

This is because improved sensors and data fusion technologies perform markedly better on home soil, with many months to train and plant decoys for attacking forces. In light of this situation, Gholz advocated for the United States and its allies to pivot to a more defensive operational concept in the Indo-Pacific, inviting hostile nations to fight the more costly offensive side of any potential conflict. However, panelist Evan Montgomery disagreed with Gholz, highlighting several virtues of the existing U.S. approach, including the reassurance of allies and peacetime cost imposition benefits on enemy nations. Whichever route the United States ultimately decides to take, it’s clear that the impact of that decision will shape the fundamental nature of the international security landscape long into the future.

Finally, I’m starting to work on my internship final project, which will be a company-wide presentation. I’m thinking of doing my presentation on something related to artificial intelligence, but I’m probably going to brainstorm a bit more and narrow my focus to a few specific applications. 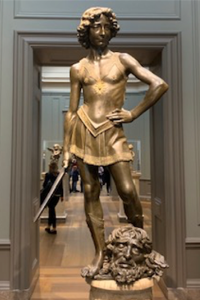 November 11, 2019 | I got a new coworker a couple of weeks ago, another intern from the UCDC program. One Sunday, I went with her and her friends, all international students from China studying at University of California schools, to the National Gallery of Art. My favorite work of art I saw in the museum was Andrea del Verrocchio’s bronze statue of David standing over the head of the slain Goliath, which I had previously studied in my AP Art History class in high school. I had originally thought that the statue I saw in the museum was a replica of Verrocchio’s original, but I actually received confirmation from my art history major friend and museum staff that it was indeed the original. In fact, the statue is one of the centerpieces of a temporary exhibit dedicated to Verrocchio at the National Gallery of Art, where it will stay until its return to the National Museum of the Bargello in Florence, Italy next January.

Afterward, we grabbed a late lunch together at a dim sum place in Chinatown before heading back to the east wing of the museum, which houses exhibits primarily to contemporary art. Before long, we were all exhausted from a full day of exploring the giant museum and took the metro back home to unwind and relax.

The other activity that I want to cover in this blog post was practically a city-wide event: the Nationals’ World Series championship parade. By the time I got to Constitution Avenue, there was already a sea of people lining both sides of the street. People definitely turned out in large numbers to celebrate and revel in Washington DC’s first World Series win since 1924. Even though I don’t really follow baseball as closely as other sports, it was still really cool to see the elite athletes that we watch on television pass by on their double-deckers, with the Commissioner’s Trophy on the last bus visibly gleaming in the sunlight. 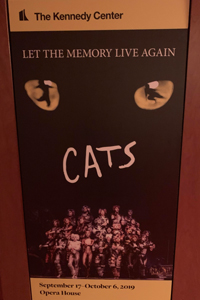 October 21, 2019 | On the evening of Wednesday, October the 2nd, I traveled to the Opera House at the John F. Kennedy Center for the Performing Arts to see a performance of the live musical Cats. Because I arrived about an hour early, I sat in on a performance of Polish folk music prior to the beginning of Act I at the Millennium Stage, which hosts a free show 365 days a year. I hadn’t been to see a musical in a long time, so I was definitely excited for Cats. I thoroughly enjoyed watching the Jellicle tribe congregate for the Jellicle Ball in the junkyard to select a cat to be reborn into a new life, and the rest of the audience loved it too. Rum Tum Tugger and Mr. Mistoffelees were massive crowd favorites, and we also gave Grizabella a standing ovation for her rendition of “Memory” as the show ended.

Last Friday, I visited the National Museum of African American History and Culture. It was very easy for me to visit the museum. Because I went on a weekday during off-peak season (September-February), I could just walk in without having to have obtained a pass beforehand. My favorite exhibition was Sports: Leveling the Playing Field.

I loved seeing the silver, life-size statues of icons Serena and Venus Williams, Michael Jordan, and Jackie Robinson, and I learned more about the influence that athletes can have beyond the scope of sport in inspiring social and political change.

In my internship, I’ve covered a large number of events in the past few weeks for our clients, with a diverse set of topics ranging from national data privacy legislation, local housing challenges in urban areas in the United States, the future of Japan’s security policy, the relationship between China and California, the new United States International Development Finance Corporation, and the new Commandant’s vision for the force design of the Marine Corps. I enjoy gaining an understanding of different perspectives on these new issues, and I’m excited to learn more in the weeks ahead.

October 7, 2019 | A few weekends ago, Ian, Santiago, and I went to the Smithsonian National Zoo together. Our primary goal was to see the giant pandas. However, when we got to the zoo, not only were the pandas nowhere to be found, but probably around three quarters of all animal exhibits were empty. I’m guessing this was due to the day’s intense heat and high humidity. All the animals were probably napping in the cool shade of their dens. That’s not to say the trip was a complete waste of an afternoon. We still got to see otters, elephants, snakes, iguanas, alligators, and over one hundred tiny turtles. The most unfortunate thing that happened to us actually occurred as we were walking back to the Metro station, when the free shuttle we had waited fifteen minutes for and then given up on passed by us.

Afterwards, we went to play FIFA 19 on Ian’s Xbox. The highlights of that were me beating Santiago with the Chinese national team versus Colombia, as well as scoring 8 goals against him once as a Chinese club side against Roma or something, all on my second time of ever touching an Xbox. It’s probably something that he will never manage to get over. We also got a ten hour preview of FIFA 20 to try out, with better gameplay features and improved graphics. All in all, it was a really fun Sunday.

As a program, we’ve gone on two site visits so far, to the National Museum of American History and Capitol Hill. Even though I’ve been to both of those places multiple times in the past, it was still really cool to revisit these two Washington DC landmarks. I look forward to further exploring all that Washington DC has to offer in the weeks ahead.

September 23, 2019 | Hi everyone! I’m Orrin Jiang, a gap year student from San Diego, California. While I would say that I’m acclimating well to my new environment so far, the DC weather has definitely been a huge adjustment for me. Just a few days ago it was humid with a high of nearly 100 degrees. And only one day later a thunderstorm moved in, dropping temperatures almost 30 degrees. That’s a whole world apart from the constant sunny, mid-70s days I’m accustomed to every day throughout the year.

I didn’t have an internship yet when I first moved in. The internship database run by Ms. Amy Morrill Bijeau was a great launching point for me to figure out where to start applying. I found the contact information for my eventual internship site, Washington CORE, through the database.

The application process consisted of two main stages. The first was a two hour exam designed to test my research and writing skills. I had to prepare a memo using information I found on the internet about either a policy or technology related topic. The second was a brief interview with the internship coordinator and company co-founder. I was lucky enough to receive an offer on the basis of the exam and interview.

I’m really excited about the assignment that I have on 9/20 for my internship. I’m attending a symposium on the socioeconomic relationship between specifically California and China. This topic is especially relevant to me as both a Californian and a Chinese American. I’m looking forward to the opportunity to study this dynamic as a microcosm of the tense relationship between the strategic competitors in Washington and Beijing.

Finally, I want to emphasize just how grateful I am for the UPass that all students get. Unlimited rides on the Metro system completely transform the accessibility of the city. Beyond visiting the landmarks and Smithsonian museums, I can hop on the red line at Tenleytown whenever I feel compelled to satisfy my cravings. Two places I’ve paid a visit to are the Jamba Juice in L’Enfant Plaza and Pitango Gelato near the National Archives (if you want recommendations, the chocolate hazelnut gelato and lemon sorbet flavors are ridiculously good). And discovering Chinatown has been a true life saver. I wasn’t going to survive long without at least a semi-regular intake of boba and Asian food. I’ll definitely be around that area a ton in the coming months.

People definitely turned out in large numbers to celebrate and revel in Washington DC’s first World Series win since 1924.