When we look back on our life, there are markers where we place ourselves in history. Where were you when terrorists struck the towers on 9/11? When we found out the first African American was elected President of the United States? When the Marriage Equality Act was passed into law? Everyone can relate to these points in time because we all participate in this shared history. But there are other events that are more personal. Meeting the President of the United States, visiting the Supreme Court and being invited to speak with a member of the court, or bumping into the former Vice President walking down the street outside the Capitol. These unforgettable moments don’t happen to everyone, but they are typical for students at American University’s Washington Semester Program (WSP).

DC is our Classroom

Generations of students have attended American University’s Washington Semester Program, which was established in 1947. Recently, a group of former students returned to campus, some who are now grandparents or great-grandparents, to attend a 50th year reunion of their semester in DC. Each had a story to tell of their unique experience during their time in DC and how it shaped their career. Entering its seventy-fifth year, AU’s Washington Semester Program is the longest running semester-in-DC program, offering a Washington, DC, experience to students from around the country and around the world.

The program not only educates students through traditional classroom lectures and seminars, with guest speakers from notable Washington insiders, but also by actually living in DC. Washington Semester students spend the bulk of their time learning how DC works – by working in DC. From the White House to the Hill, Embassies to Non-Profits, Fortune 500 companies to Food Pantries, DC provides a rich backdrop for unforgettable moments for those willing to take a risk from the usual—to try the extraordinary! 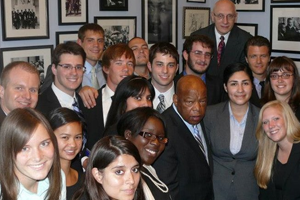 With the passing of civil rights leader and longtime Georgia Congressman John Lewis, we are reminded of what makes a Washington experience great. It’s people like Lewis, who cared deeply about the coming generation and used his gifts to advance others. He provided many of those moments for our students. The Congressman was a friend of the Washington Semester program for decades. As a busy and dedicated public servant, Lewis never forgot what it was like to be a passionate student who had benefitted from the generosity of others, notably Dr. Martin Luther King, Jr. For forty years, Lewis was a reliable presence for our students, either at his Capitol Hill office, providing internship opportunities, or hosting a class visit, where he enthusiastically detailed his turbulent journey into politics.

Professor Mark Sherman remembers fondly, “At the time of my class’s site visit to his office, we had just watched several episodes of Eyes on the Prize (the award-winning documentary series chronicling the Civil Rights Movement), so it was a thrilling experience for all of us, not just the students, to discuss it with him. His office was small at the time, so the students sat on the floor at his knee amidst all of the photos with Dr. King and so many other luminaries of the Movement. The magic of WSP is that it provides those sorts of opportunities and experiences for students and professors.”

“The Washington Semester Program for decades has provided students experiential education through site visits, speakers, and internships. In the Justice, Law, & Politics classes, we often have the amazing opportunity to visit with Justices at the Supreme Court. Justice Breyer was our most recent speaker, and he did us the great service of having several of his clerks speak with us, as well. Their collective insight is invaluable to our students and shows how our program implements DC as its classroom, at the highest levels of government and the judicial branch,” says Jason Fabrikant, Associate Dean of Academic Affairs for the program. 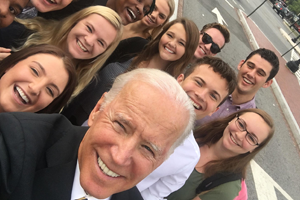 Making copies and fetching coffee may be the bane of an intern, but not at Washington Semester. Lorraine Wong (Fall 2019, Westminster College) describes one of her workdays as a Washington Semester intern for the nonprofit organization Americans for a Free Syria: “My supervisors and I visited the Senate and the House to distribute a plea regarding the current crisis in Syria. We went to the office of every single Senator and House Representative to give out a statement encouraging politicians to support a ban of President Trump's decision to pull U.S. troops out of Syria. We later attended a hearing about Syria and met with [South Carolina] Congressman Joe Wilson. A great experience!”

The View from Within 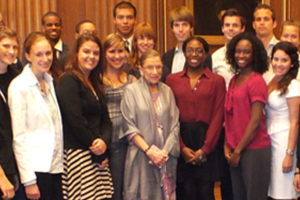 Notable political figures cross paths with our students regularly. From selfies with then Vice President Joe Biden and the late Supreme Court Justice Ruth Bader Ginsburg, workplace sightings are far from rare. Student Gracie Lucas (Spring 2020, Saint Mary’s College), who interned for Ron Wright, a Texas Congressman on Capitol Hill, recalls, “the people you meet and the environment you are emerged in on the Hill is unbeatable. For example, I got to see the Senator both on the day after the Iowa Caucus and on the day of the Senate Impeachment trial.” Marlina Simmons (Spring 2019, Spelman College) has similar experiences: “During my very first week in the office, I had the opportunity to not only meet and work with Congressman (John) Lewis himself, but I also met many other prominent leaders, such as Senator Kamala Harris, Representative and Chairwoman of the Financial Services Committee Maxine Waters, and former Georgia Minority Leader Stacey Abrams.”

Adam Anthony, Assistant Dean for the Program says, “An experiential learning program like WSP is more than just a series of courses – it puts students in the room where things happen. The seminars introduce students to the experts who are making the policy, guiding the legislation, implementing the laws, and affecting people’s lives. While working on their internships, students see firsthand how DC organizations are run and they have opportunities to network with the people they work with. Students leave the semester with a clearer direction and focus that helps direct their future studies and careers.”