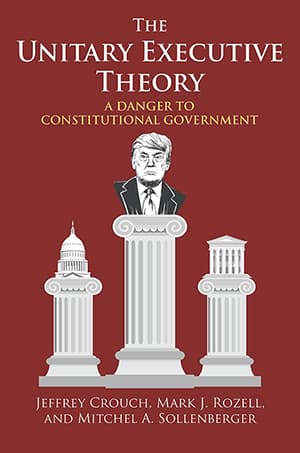 American University is pleased to announce a new book written by School of Professional & Extended Studies Assistant Professor Dr. Jeffrey Crouch, one of the nation’s leading experts on presidential pardons. The Unitary Executive Theory: A Danger to Constitutional Government, his second book, is a much-needed primer on presidential power, co-authored with Mark J. Rozell and Mitchel A. Sollenberger, and covers executive power from the nation’s founding through Donald Trump’s impeachment.

The current president has stated, “I have an Article II,” citing the US Constitution, “where I have the right to do whatever I want as president.” Though this statement would have come as a shock to the framers of the Constitution, it fairly sums up the essence of “the unitary executive theory.” This theory, which emerged during the Reagan administration and gathered strength with every subsequent presidency, counters the system of checks and balances that constrains a president's executive impulses. It also, the authors contend, counters the letter and spirit of the Constitution.

This work by three of the nation’s leading political scientists is a must-read for all citizens concerned about the fate of the US Constitution. Crouch, Rozell, and Sollenberger’s dissection of the unitary executive theory is bolstered by an unparalleled wealth of knowledge of American political history and constitutional law. This pathbreaking work of scholarship could not be more timely—read it now before it is too late.

Stephen F. Knott, author of The Lost Soul of the American Presidency

In addition to teaching, Dr. Crouch is the Editor of Congress & the Presidency journal and a Fellow at the Center for Congressional and Presidential Studies (CCPS). Dr. Crouch’s research focuses primarily on federal executive clemency, also known as the presidential pardon power. His first book, The Presidential Pardon Power, was released in 2009.

"Can Donald Trump's Presidential Pardons Be Overturned?"
Quoted in Newsweek

Donald Trump Pardoning Himself Is Being Debated, but Is There Precedent for It?
Quoted in Newsweek

"Talk Of 'Preemptive' Pardons By Trump Raises Questions: What Can He Do?"
Quoted on NPR

"Ask PolitiFact: Can Donald Trump Pardon Himself?"
Quoted in Politifact

"The President Pardons a Turkey, One of the More Normal Things He’s Done This Month"
Quoted in Washington Post

"Trump’s Pardon of Flynn Signals Prospect of a Wave in His Final Weeks in Office"
New York Times - Dr. Crouch was consulted