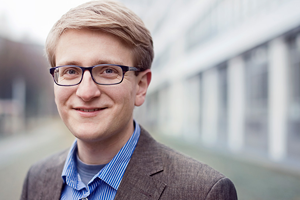 It was part chance and part passion that led Johannes Trischler to the Washington Semester Program in 2013. Trischler is originally from Germany and had never been abroad, but after he completed his law degree at the Ludwig-Maximilian University of Munich, he heard about the program from a WSP alum.

"They told me that it was a unique opportunity to meet and speak with people in the field, people who know what they are talking about," said Trischler.

Trischler was eager to continue his studies and learn about foreign policy from a different perspective, so he ventured to DC to get a first-hand look at policy and politics. He was pleasantly surprised at how close he got to the action. During the Washington Semester Program, Trischler had the opportunity to meet John Kerry, work on an election campaign in Virginia, and listen to the U.S. foreign ambassador to Syria speak on a panel.

"It's so impressive to actually be at the place where very important decisions are being made," said Trischler.

Trischler appreciated that the program offered both classroom learning and real-world experience in the students' field of interest. While he attended the Washington Semester Program, Trischler interned at the Friedrich Ebert Foundation. He credits that internship as the gateway that helped him attain a role in the Hillary Clinton presidential campaign.

"I really like that you can talk with other people about what they discovered during their internships," Trischler said. "You can share information and experiences. You get more than just an internship; you also have access to amazingly interesting people during those classes."

"I don't know enough," he said. "I have to talk to people. I have to come to other countries' capitals and talk to the people who actually make the decisions to learn how other people and how other states work."

Johannes Trischler had always been interested in foreign policy and politics. When he finished the program, he had more than just a theoretical understanding of policymaking, and he had seen the process in action. Trischler recommends the program to those who want to see the reality of policymaking and how it can make a difference.

"If you want to see how real life policymaking works...go to WSP."