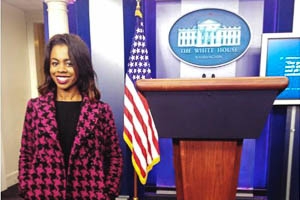 Kaylah "Kami" Simmons is a senior at Kalamazoo College with a major in Theatre Arts, Media Studies, and Economics. She is interested in theatre arts, media and television, entertainment, political science, and policy-making. In the summer of 2015, Simmons ventured to DC in search of internship experience through the Washington Semester Program.

"I wanted a program that had internship opportunities for students interested in news and broadcasting with an emphasis on public policy," said Simmons. "I knew that through this program, I would be able to take a course at American University while participating in an internship that aligned with the course and my interests."

Simmons interned at the Voice of America as their English Division Social Media intern. Throughout her time at the Washington Semester Program, she questioned how policy-making relates to fashion, pop culture, and her many other interests. Simmons learned so much from the Washington Semester Program and her summer internship that she was encouraged to apply to the White House for the fall 2015 semester.

"It allowed me to take skills from the Washington Semester Program and continue them in my policy role at the White House," said Simmons about her amazing experience as a White House intern.

During her time in the White House, Simmons worked on the "Let Girls Learn" initiative and First Lady Michelle Obama's Leadership and Mentoring Program. Simmons was able to gain more knowledge on policy-making concerning women and girls while learning about the inner-workings of the White House. This internship experience also broadened her possible career paths, including some she had not considered before.

This past summer, Simmons interned as the Planning and Programming intern at HLN with CNN. The role gave her the opportunity to practice using a television teleprompter. She was also able to pitch story ideas and help produce and write scripts for various shows produced by the HLN network.

"I want to be a journalist who not only gives people a voice by telling their story, but I also want to challenge my viewer's thinking of the world around them," said Simmons about her future career endeavors. "I am a modern-day renaissance hybrid woman with many interests and interning at the Voice of America, the White House, and CNN has helped me to continue to think about how I want to connect all of those interests to create my own career path."

After graduating this spring, Simmons plans to attend graduate school for journalism. She hopes to join a television network as an on-air personality and correspondent. Ultimately, she wants to create her own television and media production company, which will allow her to create content, tell stories, inform, and inspire. The Washington Semester Program gave her the chance to reflect on her career plans while exploring her interests.

"I credit this program for giving me the opportunity to think broadly about how I want to continue to combine my interests of policy making and journalism to inform, inspire, and shake up the world while also challenging the beliefs of my future audience."