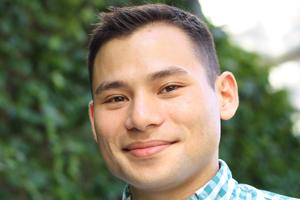 Erik Lin-Greenberg's Air Force experience has informed his research on the ramifications of military technology.

In recent years, some national security thinkers have raised alarms about the use of drone warfare technology. Drones seemingly make it easier to wage war from afar, with nations all-too-conveniently oblivious to the carnage they’re creating. Scholar Erik Lin-Greenberg says we need to recognize those risks, but through his research, he’s also found benefits to this technology.

As opposed to hitting an aircraft with a person inside, countries may be less likely to escalate a conflict if an unmanned drone is attacked. When Iran recently shot down a US drone over the Persian Gulf, he notes, it didn’t provoke a war.

“What I’ve been trying to do with my research is to say, ‘There are huge stabilizing effects that these systems could have, and we need to think more deeply about those implications.’”

This is the kind of cutting-edge—and highly pertinent—research that Lin-Greenberg will be conducting at American University’s School of International Service. Though recently hired, he’ll spend this year doing a Perry World House postdoc fellowship at the University of Pennsylvania before joining SIS next fall. This article is part of an ongoing series profiling new AU faculty.

Learning from the Best

Lin-Greenberg’s research is informed not just by close study, but his own military experience. After doing ROTC and getting his BS and MS at Massachusetts Institute of Technology, he became an active-duty US Air Force intelligence officer. He was stationed in Texas, California, and the DC area, and deployed to Afghanistan and a few Persian Gulf countries. He left active-duty to attend graduate school in 2013—he earned his PhD from Columbia University—and he now spends roughly 40 days a year in uniform as a reservist.

Lin-Greenberg explains why he’s enjoyed military service. “For me, it was the opportunity to learn from and lead some of the best and brightest folks in the air force. My last active-duty assignment I commanded a 125-member unit that conducted intelligence analysis,” he says. “I think I learned a lot about myself, and the ability to give back.”

He also saw a need to ponder the ramifications of the US military’s emerging technologies. Again, his military background could enlighten his research. “I got to work hands-on with some of these systems. Then you realize, in many cases, the military treats these things as tools. There are a lot of questions that often go unanswered about the implications of these systems, once you start using them more broadly.”

During the research process, Lin-Greenberg’s US Air Force credentials have helped him gain the trust of senior military officials. “They’ll say ‘One of the reasons we’re willing to talk with you is because you previously served as an air force officer.’ There’s this interesting fraternity of service people who are just willing to speak with you more freely and openly.”

Lin-Greenberg grew up mostly in northern New Jersey, not far from New York City. The Big Apple influence resulted in an early turn in the spotlight, as he performed in a Broadway production of The King and I alongside big-name actors like Lou Diamond Phillips. Lin-Greenberg says his singing career fizzled out by the time he got to high school. He also dealt with some life disruptions, as his family moved to Las Vegas during his teens.

Yet circa 9th grade, while still living in Jersey, a dark day in Manhattan profoundly shaped his future. It may sound cliché, he says, but the 9/11 terrorist attacks spurred his eventual ROTC plans.

“I remember being dismissed early from school that day. And, walking home, seeing fighter jets fly over at probably 2,000 or 3,000 feet. I knew that everything was crazy, but I felt a sense of safety knowing that there were folks who were taking care of us that day, and making sure that we would hopefully not see any additional attacks,” he recalls. “I made a decision that I wanted to join the military.”

These days, he’s excited to join SIS and he’ll remain in the Air Force Reserve for the foreseeable future. He also has a compelling side interest, which comports nicely with his research: the international politics of food. Even while digging through archives for his military technology research, he’ll look up examples of “food diplomacy.”

One favorite anecdote he stumbled upon? At the request of the South Korean prime minister, President Lyndon Johnson arranged to get kimchi to the South Korean troops then helping the US in Vietnam.

“My interest is just motivated by me really liking to eat and explore foods,” he says. “Every time I travel for field work, I find myself spending a lot of time in restaurants and markets.”