What is carbon removal?

Carbon removal, also known as carbon dioxide removal (CDR) or carbon drawdown, is the process of capturing carbon dioxide (CO2) from the atmosphere and locking it away for decades or centuries in plants, soils, oceans, rocks, saline aquifers, depleted oil wells, or long- lived products like cement. Scientists have proposed many different methods of carbon removal. Some of these are already in use at relatively small scales, whereas others remain in the early stages of research and development. Technologies and practices for implementing carbon removal are often called negative emissions technologies (NETs).

Why is carbon removal important?

Carbon removal matters because somewhere between 15–40% of the carbon dioxide that humanity emits will remain in the atmosphere for up to a thousand years, with roughly 10– 25% of it persisting for tens of thousands of years. Removing and sequestering that carbon dioxide could permanently reduce climate risk by slowing or even reversing climate change.

It will be very difficult to meet ambitious climate change mitigation goals without large-scale carbon removal. In the 2015 Paris Agreement, the international community committed itself to “holding the increase in the global average temperature to well below 2°C above pre-industrial levels and pursuing efforts to limit the temperature increase to 1.5°C.” In the studies reviewed by the Intergovernmental Panel on Climate Change for their Fifth Assessment Report and their Special Report on Global Warming of 1.5°C, most of the pathways to meeting the Paris Agreement’s targets require the world to supplement aggressive emissions reductions with at least some form of large-scale carbon removal.

Carbon removal is not the same as carbon capture

The distinctions between carbon removal and CCUS are easily blurred—and are sometimes deliberately blurred—because both involve capturing carbon dioxide and because a few approaches to carbon removal even incorporate some of the same equipment and process steps as CCUS require. Nonetheless, CCS on fossil-fueled power plants does not count as carbon removal. Nor does the use of captured carbon in short-lived products, such as beverages or synthetic fuels, regardless of where that carbon came from. This is not just a semantic point: maintaining a clear distinction between carbon removal and CCUS matters because, unlike carbon removal, neither CCS nor fossil-based carbon capture and utilization (CCU) can actually draw down atmospheric carbon dioxide levels. To say this more simply: carbon removal removes carbon dioxide from the atmosphere for long periods of time, while CCUS can only reduce the amount of carbon dioxide entering the atmosphere. Proponents argue that CCUS could play a valuable role in climate policy. Even so, CCUS and carbon removal would play different roles in long-term climate strategies.

Although the distinction may seem complicated, in practice it only takes two simple questions to distinguish genuine carbon removal from similar technologies, as shown in the flow chart in Figure 1. 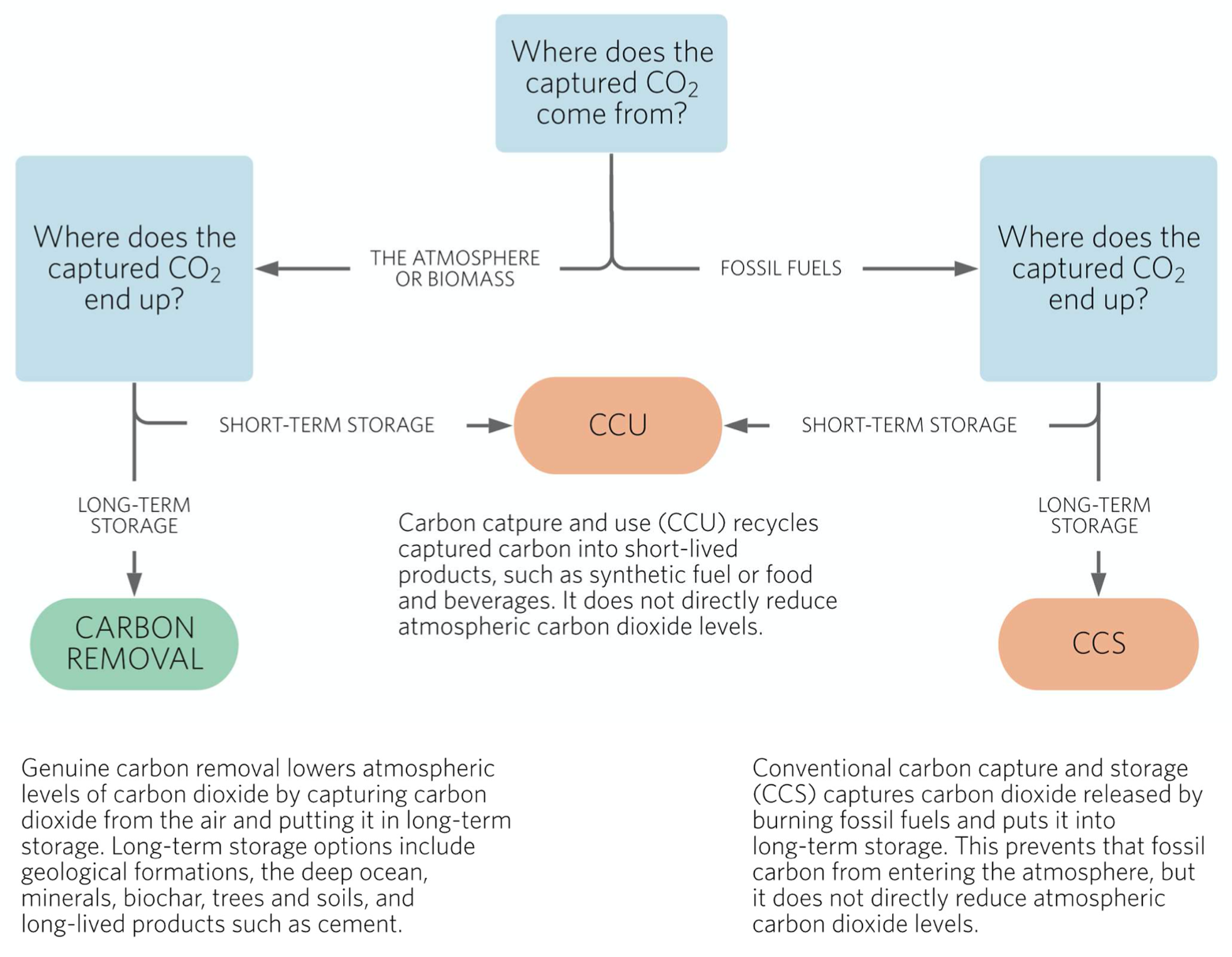 There are, however, two general concerns that people have about carbon removal. The first is the prospect of a “moral hazard effect” in which policymakers or other actors might use the prospect of carbon removal--especially the prospect of large-scale carbon removal in the distant future--as an excuse to avoid cutting carbon dioxide emissions now. Relatedly, some people worry that counting on large-scale carbon removal in the future amounts to a high-stakes gamble with future generations’ welfare: if we emit more carbon dioxide now with the intention of removing it later, but carbon removal proves infeasible for any reason, then we will have saddled future generations with a worse climate than necessary. The converse is also true, however. It will take decades to scale carbon removal technologies and practices up to the point where they can significantly affect the climate. So, if we put off research and development now with the hope of eliminating greenhouse gas emissions quickly, but eliminating greenhouse gases remains difficult, we will also have saddled future generations with a worse climate than necessary.

Governance includes not just to government regulations, but a broad range of formal and informal rules, norms, and incentives that shape people’s behaviors. Some governance issues cut across the broad range of carbon removal technologies and practices, including:

Furthermore, each approach to carbon removal raises its own specific governance challenges, some of which are discussed below.

There are many different ways to capture carbon dioxide from the atmosphere and sequester it. Different countries are likely to adopt different baskets of these technologies and practices to suit their local circumstances. This section describes several of the most widely discussed approaches. Figure 1 summarizes each approach’s potential, possible side effects, and projected costs.

Biochar is a kind of charcoal produced by heating biomass in a low-oxygen environment. When buried or ploughed into soils, it locks carbon away for decades or centuries while enhancing soil quality. It can therefore complement most other land-based forms of carbon removal, although it would compete with BECCS for biomass inputs. As with BECCS, the amount of carbon ultimately removed with biochar depends on what kind of biomass is used, how it is sourced and heated, whether the soils are eventually disturbed, and other details of the process. Biochar is currently produced on a small scale, but large-scale field trials are needed to refine estimates of its potential, co-benefits, and side effects.

Bioenergy with carbon capture and storage (BECCS) involves growing or collecting biomass, processing it, converting it to biofuels or energy, capturing the resulting carbon dioxide, and storing it underground or in long-lasting products. There are many different ways to implement BECCS, depending on whether the biomass is purpose-grown or collected from agricultural wastes, forest residues, or other sources; whether it is converted to liquid or gaseous fuels or pelletized and burned to generate heat or electricity; whether it is sequestered in depleted oil fields, saline aquifers, basalt formations, or long-lasting products; and so on, all with major implications for BECCS’ climate impact and overall sustainability. Besides various pilot projects and small-scale BECCS projects at various kinds of facilities (e.g., waste-to-energy, ethanol, cement, electrical generation, etc.), the American agribusiness firm Archer Daniels Midland operates a commercial facility in Decatur, Illinois; the British electrical power generation company Drax has converted a large coal-fired power plant in North Yorkshire to run on wood pellets, with plans to add carbon capture and storage; and Toshiba is adding CCS to its Mikawa biomass-fired power plant in Japan.

Coastal “blue carbon” refers to carbon sequestered by restoration and better management of coastal wetlands and seagrass meadows. These areas currently hold large amounts of carbon in biomass and sediments. Restoring degraded wetlands or seagrass meadows or creating new ones could increase the total amount of carbon dioxide they absorb from the atmosphere while also providing important co-benefits. Some researchers have also proposed growing seaweed and sequestering the captured carbon in various ways. Estimates of the global potential for carbon removal with blue carbon are not yet available.

Direct air capture and carbon storage (DACCS) refers to processes that capture CO2 with purpose-builtmachinesandstoretheCO2 inthesamekindsofgeologicalreservoirsorlong- lasting products used for BECCS. These machines capture CO2 from ambient air using various chemical processes and then separate the CO2 for sequestration. Whereas natural materials, such as biomass or rocks, provide the primary inputs to other carbon removal technologies, the primary input in DACCS is energy. Three companies currently run direct air capture facilities, most of which are relatively small facilities that reuse the captured CO2 rather than sequestering it. Two larger scale DACCS facilities are currently under development: Climeworks’ facility in Iceland will sequester CO2 in rock, and Carbon Engineering’s facility in Texas will provide CO2 for enhanced oil recovery, which sequesters thecapturedCO2 butincreasesproductionoffossilfuels.

Enhanced mineralization involves accelerating the natural processes by which various minerals absorb CO2 from the atmosphere. The process begins by mining specific kinds of rock, such as olivine or basalt. One prominent proposal for implementation would involve grinding those rocks into powder and spreading the powder over soils, where it would react with the air to form carbonate minerals. Minerals released in the process could enhance soil quality. Other options include exposing powdered rock to CO2-rich fluids or spreading it over the ocean. Enhanced mineralization remains at the very early stages of research and development, but the long-term potential may be quite large.

Forestation involves planting trees over large areas or allowing forests to regrow naturally. Growing trees on land that was recently covered in forest is called reforestation; growing trees on land that has not been recently covered in forest is called afforestation. Forest restoration refers to helping degraded forests recover their natural forest structure and rebuild ecological processes and biodiversity. These new or restored forests would absorb carbon in both the trees and the soil as they grow, with the rates and side effects depending on the mix of trees being planted and whether the forest regains its natural ecological functions. Forests would sequester the captured carbon for as long as they remain standing, which means that, as with other biological methods of carbon removal, the climate benefits of forestation are reversible. For example, if the forest burns down, the captured carbon returns to the atmosphere.

Ocean alkalinization involves adding alkaline substances to the ocean, where they absorb CO2. The most direct way to do this is by spreading substances, such as lime, over the ocean, although scientists have proposed other approaches, as well. This is often classified as a type of enhanced mineralization, but it offers the added benefit of directly counteracting ocean acidification by increasing the pH of seawater. Like enhanced mineralization in general, research on ocean alkalinization is still in very early stages.

Soil carbon sequestration refers to a number of different practices for increasing the amount of carbon stored in soils, especially agricultural soils. Prominent examples include no-till agriculture, manuring, and cover crop rotation. Because they improve soil quality, these practices can contribute to improved crop yields and help protect fields against both floods and droughts. Soil carbon sequestration methods are already in use and ready to scale up, but key challenges remain, including encouraging widespread adoption and ensuring long- term maintenance of the practices to keep the carbon in the ground. 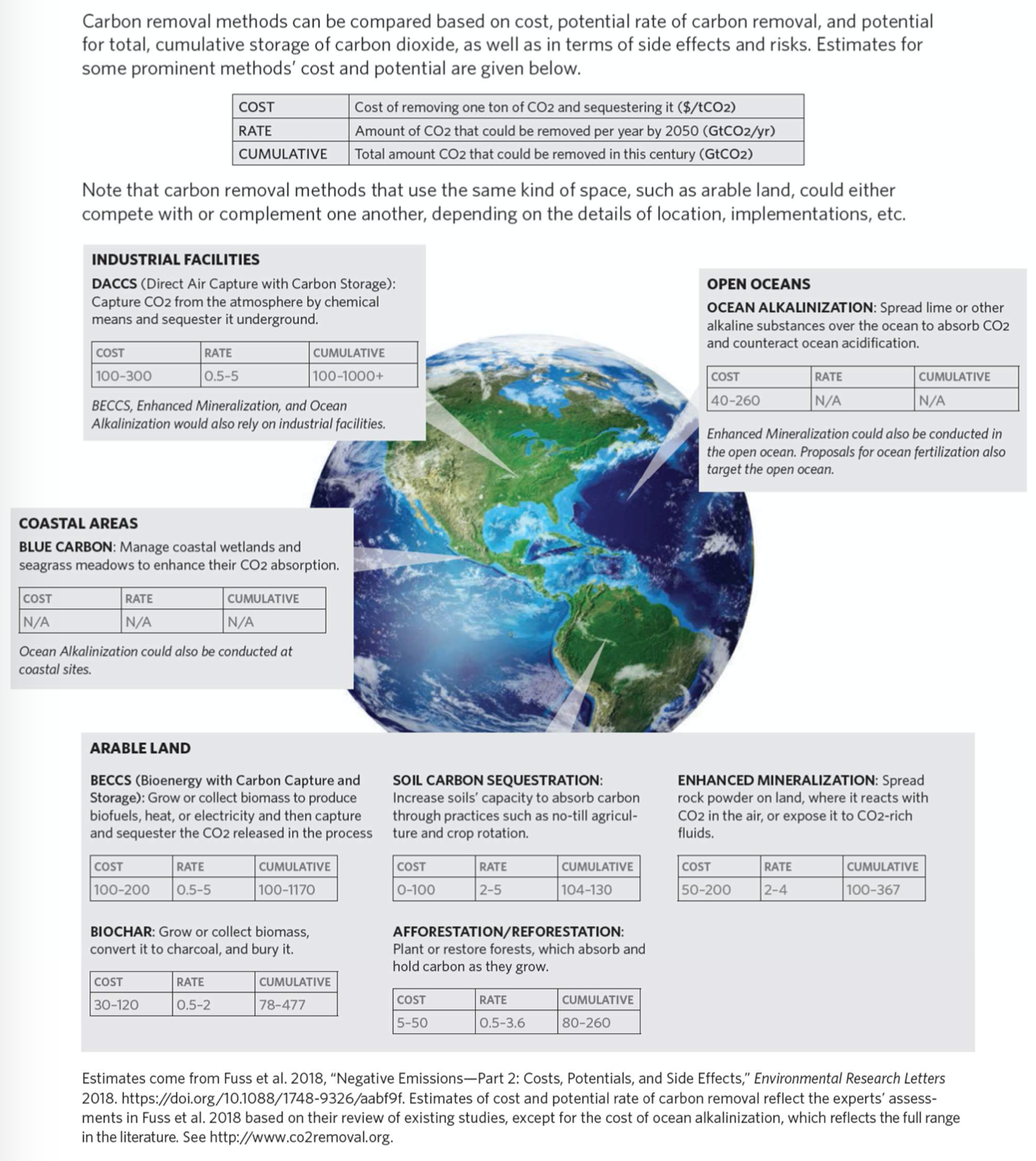 For further information on carbon removal, please see the Fact Sheets on our web site at https://carbonremoval.info/factsheets or consult any of the following publications, all of which can be downloaded for free.