From stories of his early West Point days stumbling upon concepts of social engineering, to his twitter discussions with Omar Hammami, to his analysis of modern Russian active measures, Clint Watts’ Messing with the Enemy provides a vivid and persuasive guide to the issues of disinformation, electronic espionage, and influence operations plaguing the United States today.  Everyone from average citizens to policymakers can fight back, Watts insists, and he even demonstrates how.  As a former US Army Officer, FBI Special Agent, and current leading cyber-security and counterterrorism expert, Clint Watts is a compelling authority who has mirrored the techniques of social media manipulators in order to analyze, co-opt, and combat their shady schemes.

Examining one actor or scenario paired with one platform at a time, Watts’ analytical framework is compelling and easy to understand.  Watts begins with his first exposure to social engineering and manipulation at West Point and connects these early experiences to his Twitter conversations with Alabama-born Al-Shabaab terrorist Omar Hammami.  Using a mix of his personal skills and training, he engages Hammami over long periods on Twitter to learn what motivates him, as well as understand how terrorists and their “fanboys” (as he calls them) interact, promote, and recruit via social media.

Watts continues this theme in a chapter he terms “The Rise and Fall of the Virtual Caliphate.” Here he examines ISIS recruiting and marketing strategies, remarkably more advanced than those of Al Qaeda’s al-Zawahiri and bin Laden. Ordinary people from around the world were inspired by the thousands to join ISIS either at home or in the Middle East. Watts also describes the ways that the US government harnessed information, such as the Harmony Project at West Point, to understand the minds and motives of terror groups as the United States and its allies hunted for Bin Laden.

The book is an around-the-world tour of the ways social media is used for nefarious purposes, with stops in the Middle East, Africa, Russia, and the United States, and it also includes non-state actors that cannot be confined to regions, such as WikiLeaks. Focusing on both state and non-state actors, Watts looks at the use of social media bots, as well as at the rise of internet trolling as a manipulation tool, which he divides into three groups, called hecklers, honeypots, and hackers.

Malcontent actors have gone from simply hacking accounts to hacking minds, according to Watts. In describing the ways that internet and social media tools are manipulated, he does not shrink from tackling the US domestic landscape, as well.  He shows how Republicans have cheered the Russian hacking of the DNC, Americans have turned against each other online, and how Russia’s preferred candidate, a millionaire reality television figure, became President. The previously separate reality on the internet has become mixed with the reality of the physical world, changing how people are influenced forever.  Published in January 2019, the book spends much  time on social media influence operations, hacking, and Russian disinformation efforts—from official Russian propaganda channels like RT and Sputnik, to Russian government-supported active measures by the Internet Research Agency.

Watts emphasizes how reprehensible human users of the internet and social media no longer need to be directly connected to an action or target on social media to reap rewards.  He even rebuts the idea that staying away from social media protects you from being influenced.  The social media and mainstream media worlds are now irreversibly linked, just as the cyber and physical worlds are permanently intertwined through the internet of things.

But all is not doom and gloom.  Watts proposes a sort of certification, Consumer Reports-style process to label various media companies in order to better inform the user and separate fact from fiction.  Going one step further, Watts partially subscribes to ‘feeding the trolls’, especially the fake, or bot accounts, by feeding them misinformation and “trapping [the bot] in an information battlefield.”  In his final chapter, entitled “Surviving in a social media world,” Watts closes with important things that social media users must remember, such as treating everything typed as if anyone could read it.  Just as importantly, users must evaluate content both inside and outside their media preference bubbles, to discern sources and trustworthiness in what they consume on online platforms.

Despite the compelling overview of the disinformation, terrorism and cyber threats facing the United States, the book might also have covered related problems of internet structure.  For example, in addition to discussing how to secure content, Watts might have addressed how to secure cyber infrastructure from outside influence. The ongoing US House of Representatives debate over censorship of political speech pays scant attention to keeping malcontent domestic and foreign users from interfering with, damaging, or hacking into the internet infrastructure that is vital to American social, political, and economic life.  A brief overview of the US and allied cyber infrastructure weaknesses would have helped illuminate the full scope of internet-facilitated threats faced today.

But overall, it is hard to fault Messing with the Enemy.  With a clear writing style that easily breaks down the most complicated concepts, Watts expertly explains the evolution of the corrupt ways that social media and mainstream media are used today to steal information and influence minds.  Even in a book intended as an overview, Watts’ analytical skills and decades of experience and research shine through, as he backs up his claims with data or specific real-world scenarios.  Although some may complain about the lack of more in-depth policy suggestions, perhaps those ideas are better saved for Congressional testimony or closed-door meetings with decision-makers.  Smart, darkly funny, and authoritative without being arrogant, Messing with the Enemy is a must-read for anyone seeking to understand the nefarious ways media outlets are being used today. 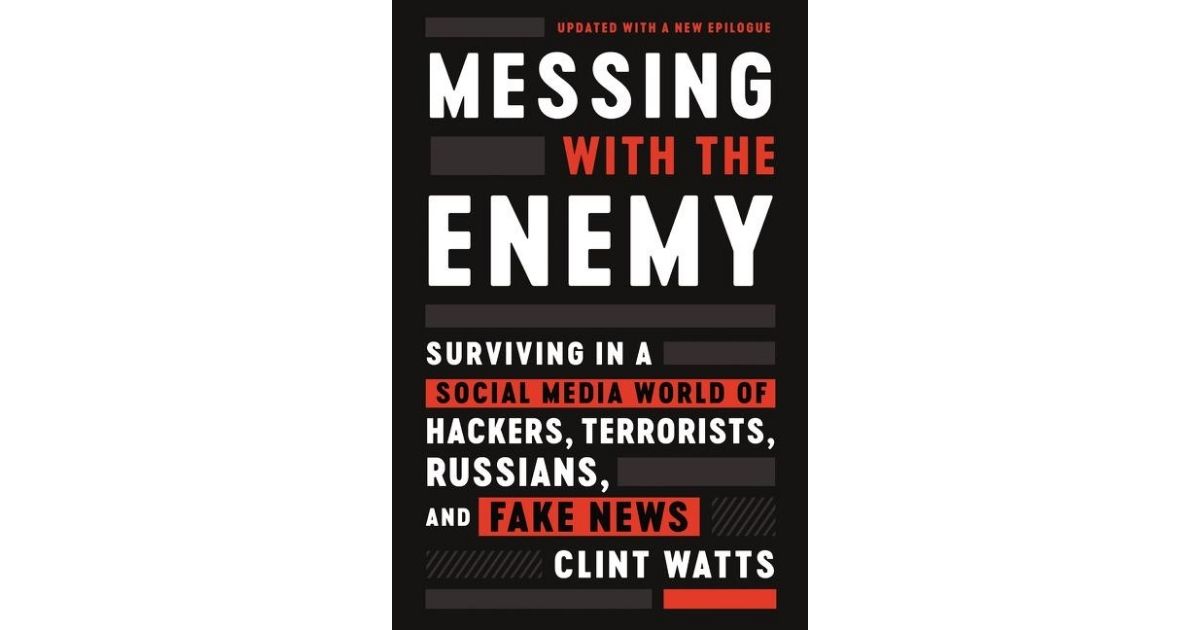 Nicholas is a graduate student in the Global Governance, Politics, and Security Program, concentrating in global security. A graduate of Oregon State University, his main research areas of interest revolve around issues of misinformation and active measures operations, irregular warfare, and strategic power competition and the evolution of grand strategy in the 21st century.