Christian Brose’s striking book issues a clear call to update the “kill chain” employed by the U.S. The kill chain is a battlefield process that involves three steps: understanding what is happening, deciding what to do, and taking action that creates effect to achieve the objective (3). A persistent failure to procure emerging technologies and update strategic thinking has resulted in a laggard kill chain. The result is acute vulnerability for U.S forces and the U.S homeland. An updated kill chain would center on dynamic networks: on large numbers of smaller, expendable, low-cost machines with the ability to share information and increasingly directed by intelligent machines following commander’s orders. An updated strategy would focus on a concept currently foreign to many American planners: defense. The updated concept of American “victory” features parity and deterrence, which will be quite difficult as China reveals power that surpasses the Soviet Union’s and, in some areas, our own.

To reach these conclusions, Brose draws upon a wealth of experience and troves of primary sources. His decade of experience working in the “iron triangle” most prominently featured a longtime position as John McCain’s principal advisor on national security and military issues. This included time as Chief of Staff during McCain’s stint as chairman of the Senate Armed Services Committee, with access to highly classified knowledge, high-ranking officials, and intimate experience with budgeting processes. These sources are marshaled to great effect, producing an engaging and insightful experience over twelve chapters.

Chapters 1 and 2 highlight the stunning accuracy of a 1993 prediction on the future of warfare. It centered on the need of information to be integrated into a battle network, for a dynamic kill chain that leveraged emerging technologies in communication. In 2014, Russia’s “Little Green Men” would demonstrate exactly that – to devasting effect. The so-called “Gerasimov doctrine” of networked sensors and shooters even outstripped many U.S capabilities. We had not only underestimated the capabilities of emerging great powers: we had also failed to procure the necessary technology for our forces.

In chapters 3 and 4, Brose leverages his access and primary sources to illustrate how the U.S was “ambushed by the future” (41). Prior to the 1960s, an abundance of risk-tolerance, funds, and flexibility produced rapid technological developments such as nuclear submarines, ICBMs, and the SR-71 Blackbird. After the 60’s, a combination of bureaucratic expansion and industry consolidation (from 107 to a paltry 5) stifled rapid R&D capacity. The lack of freedom and low pay drove out talent – straight to Silicon Valley. Brose painfully illustrates the contrast in development, referencing how self-driving cars have 8 times more processing power than the most capable computer in a military vehicle (onboard the F-35 Joint Strike Fighter).

Brose also draws attention to an outdated approach by Pentagon leaders: adding staff instead of machines to make sense of data. Brose makes clear that AI projects such as Google’s AlphaStar are already able to reliably understand, incorporate, and execute winning military strategies in battlefield conditions. In particular, deep learning (the layering of algorithms to refine the analysis of the previous layer) is tragically under-utilized, leading to waste of information gathered by top-dollar U.S military sensors. Despite the capability of AI in 2018, the top 5 U.S. defense companies invested just $6.2 billion in research, while the top 5 commercial companies invested $70.5 billion (74).

Middle chapters argue that breaking this trend requires the definition of clear threats and an alliance of civil and military leaders pushing for innovation. China is that threat: on track to be a peer competitor, lacking moral restraints, and leading military investment in the new arms race featuring “killer robots,” hypersonic and quantum weapons, gene editing, and space militarization.  Brose struggles with advocating for “killer robot” systems, referring to their use as “neither expected nor wanted” (139). It is possible for commanders to train, test, and trust the actions of intelligent machines. Their decision-making is absolutely limited by the parameters commanders input.

Their assistance will be a common feature in future warfare, central to the military Internet of Things. Brose is confident that the ratio of humans to machines involved in the kill chain will invert for the first time in human history, as technology for sensing and shooting exponentially increases the amount of information needing to be processed at high-speed. He is adamant that communication models should shift to a decentralized approach of reconfigurable mesh webs incorporating intelligent machines.

Ending chapters contain an equally passionate assessment that the U.S. will need to accept a future of actions denied or deterred by China, and the need to meet such a future with a defensive strategy. Reforms to U.S. budgetary processes are needed, such as allowing greater flexibility to re-allocate funding and the revival of earmarks – with additional transparency. Recipes for budgetary victories include:  early, candid engagement with key stakeholders in Congress about the limits of existing platforms and how new programs are better; generating counter-lobbying for new systems by defense industry; and commitments to base new systems in same states and congressional districts. These bureaucratic battles must be won, consistently and rapidly, in order to shift the American way of war. Failure means a decidedly bleak future for American forces.

The book may have benefited from visual elements highlighting bureaucratic processes and investment flows for procuring emerging technology. That aside, it is a clear and practical read. Blessedly devoid of heavy theory and jargon, the writing is accessible to all readers. It is teaming with concrete examples to help contextualize both the urgency of the message and the staggering capabilities of emerging technologies. Brose is successful in raising the alarm alongside solutions.

The Kill Chain admirably condenses a dynamic, sprawling field of emerging technologies into prioritized considerations amidst bureaucratic reality. It is pragmatically patriotic and thoroughly researched. It is absolutely deserving of widespread attention. 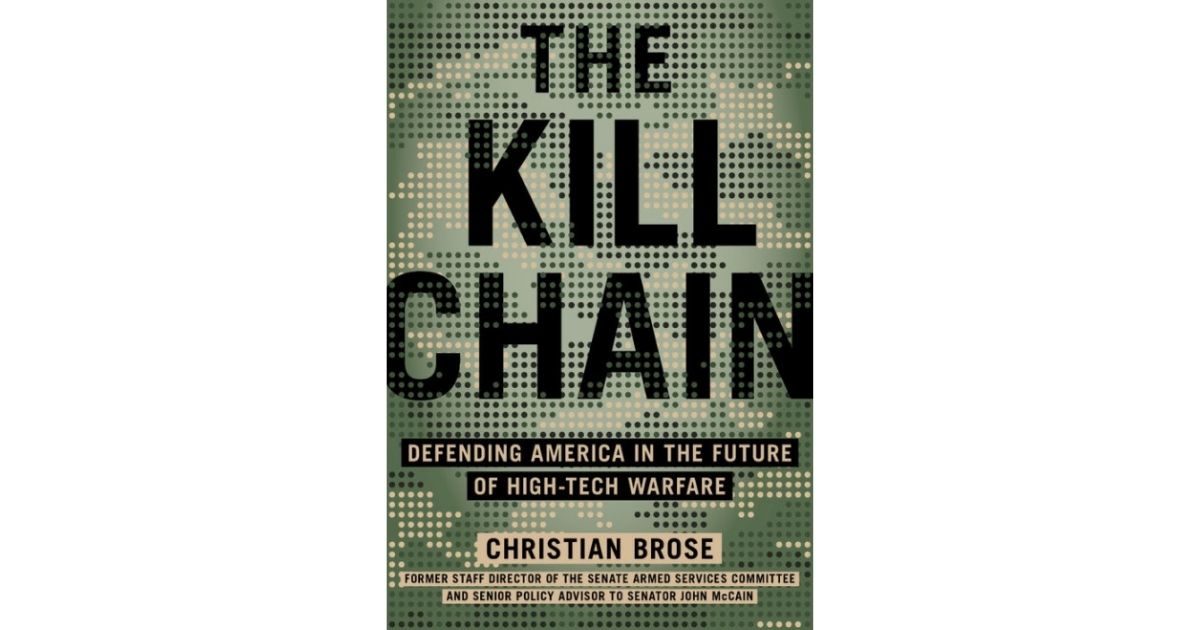 Edgar Palomino is an Research Associate with the Internet Governance Lab. He is a current graduate student at American University's School of International Service,  studying emerging technologies as part of the International Affairs & Policy Analysis program. His research interests include blockchain policy, technology standardization, and competition within emerging markets. He recently returned from Peace Corps service in the Republic of Moldova, where he promoted technology skills as a Community Development Volunteer.