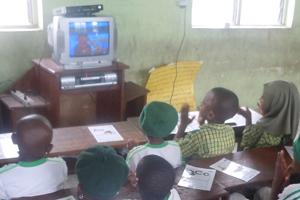 Naomi Moland researched the creation of a local version of Sesame Street in Nigeria. Her book looks at children's television, multicultural education, and US soft power.

That special place—with beautiful sunny days, sweepin’ the clouds away—turns 50 this weekend. The first episode of Sesame Street aired on November 10, 1969, and it’s still educating and enchanting kids today. While media outlets are celebrating the impact of the beloved children’s television show in the US, there is a lesser-told story about its influence abroad.

American University’s Naomi Moland just published Can Big Bird Fight Terrorism?: Children’s Television and Globalized Multicultural Education, her fascinating deep dive into how the TV series was created in Nigeria. And it’s not just a book about Sesame Street and public television. It’s a clear-eyed look at US cultural influence, and how even great ideas aren’t easily exportable across continents.

When Moland learned that a Nigerian version of the show was in the works, she approached Sesame Workshop—which creates different versions of Sesame Street around the world—about conducting research on the show.

“I used to teach elementary school, and I have a research background in global media and international education. This was such a fascinating example of how a more non-formal educational tool is used via children’s television,” says Moland, a professorial lecturer in the School of International Service. “And I thought it was a fascinating example of something that’s globalized, but people are tailoring to specific contexts.”

The show, called Sesame Square, ran in Nigeria from 2011 to 2014, and reruns are still airing. It was made by both Nigerian and American producers, but the Nigerian creators held more sway over the show’s direction. The irony is that Sesame Square was among the most “Nigerian” shows in Nigeria, since much of the children’s TV there—Dora the Explorer and SpongeBob SquarePants, for instance—are exact American imports.

However, Moland found instances when Sesame Square didn’t account for Nigerian sociopolitical realities, such as the influence of terrorist group Boko Haram.

In late 1960s America, Sesame Street was a landmark for diversity and multiculturalism, five decades before Hollywood was still struggling to get a handle on accurate representation. But Moland says American conceptions of diversity don’t always translate well in Nigeria. On Sesame Square, viewers heard rhetoric about the importance of girls’ education, and why school is fun for everyone. But for many young Nigerian girls facing threats of violence, school isn’t even an option.

“Girls in Northeast Nigeria, especially, are seeing their schools destroyed. It’s dangerous for both boys and girls to go school, but it’s particularly dangerous for girls,” Moland says.

Keeping up with the Times

Yet, like their American counterparts, Sesame Square creators kept up with the times to deliver smart, relevant social content. Over the years, Sesame Street has featured characters with disabilities and autism spectrum disorder, as well as a family impacted by mass incarceration. Sesame Square’s orange monster Muppet, Kami, is HIV positive, and she was based on a character from the South African version of Sesame Street.

“Nigerian producers decided that children needed to learn about this, because so many families were affected,” she says. “Compared to South Africa, a lower percentage of Nigerians are infected by HIV, but it’s still a huge number because the Nigerian population is so big.”

And while the American Sesame Street has been largely secular, Sesame Square subtly acknowledged the more prominent role of religion in modern Nigeria.

“But it was pretty difficult for creators to agree on how to represent that,” recounts Moland. “In one episode, the two main Muppets, Kami and Zobi, hear a school bell, then hear a Mosque call to prayer, and then they hear a church bell. And they say something like, ‘oh, these are the sounds of our community.’ It was a pretty light touch, but it was there.”

There were other national flavors, figuratively and literally, that gave Sesame Square its own personality. Zobi was sort of the Nigerian Cookie Monster, but he constantly craved yams instead of Oreos.

“It would almost be like having a ‘bread monster,’ because people in Nigeria eat yams every day,” she says. Moland adds that yams are popular across ethnic groups, and Zobi and Kami were created to have pan-ethnic sensibilities.

Sesame Workshop has co-produced about 30 different Sesame Street-type shows in some 150 countries, giving it almost unparalleled reach. Sesame Square was funded by the US Agency for International Development, a fact made clear in the show’s credits. It’s an example of US public diplomacy, part of “soft power,” to spread American goodwill and establish better relations with countries without using military force.

Moland says there are continuing debates about whether the US should fund these kinds of programs, and there’s evidence leaders are already retreating from this mission. Earlier this century, USAID was funding about a dozen Sesame Street programs, but now the agency is only funding one, in Bangladesh. (Local financiers stepped in to support Sesame Street in India and South Africa, among others.)

She points out that public television is cost-efficient, and all forms of US foreign aid are miniscule compared to what the US spends on military hardware and counterterrorism. “A program like this is just a tiny drop in the bucket. But it’s one way that the US government can send out positive messages about peace and tolerance and diversity, and I do think that that’s something we should continue to do.”

Above all, Sesame Street is a stellar educational series, with a thoroughly researched curriculum worth sharing. “The show’s focus is on basic alphabet skills; numeracy skills and counting; sorting and organizing; learning opposites; and also social skills, like cooperation and taking turns,” she says. “I think that’s definitely important, especially in a country where school resources are really limited.”