American University School of Communication's student commencement speakers for 2016 are International Media MA student Candice Norwood and journalism major Trey Yingst. Norwood has been a Dean’s Intern at C-SPAN, The Washington Post, and is currently working at Vox.com. Yingst is co-founder of online media outlet, News2Share.com.

“It’s difficult to choose one or two things that I’ve gained from my time in SOC,” Yingst said. “For me SOC was an encompassing experience that included learning the crucial skills of storytelling while getting real world journalism experience.”

Yingst and Norwood were selected from a competitive pool of applicants based on speeches they submitted that highlight stories about their time at AU and relationships they have built. 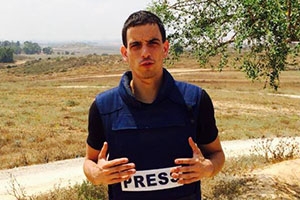 Trey Yingst is an award-winning reporter and videographer based in Washington, D.C. He has contributed to CNN, ABC, NBC, and many other networks in addition to providing frequent commentary for BBC World, HLN and CTV News. Furthermore, Yingst co-founded News2Share.com and reports from the White House when he is not traveling abroad. His assignments include Ferguson, Baltimore, Rwanda, Uganda and Ukraine. Yingst was also the youngest journalist allowed to enter the Gaza Strip during the 2014 war.

Candice Norwood spent last semester as a metro desk intern with the Washington Post, and currently works as a Race & Identities Intern at Vox.com. Norwood graduated from the University of Illinois at Urbana-Champaign in 2013 with a bachelor’s in news-editorial journalism and a minor in Spanish. The St. Louis, Missouri native is also an avid traveler. Her most recent experience in the fall of 2013 took her to Madrid, Spain for a year to work as an assistant English teacher. Previously, she was a Dean's Intern with NPR, an international programming intern with C-SPAN and a metro desk intern at Newsday. In the future, Norwood plans to work in digital news covering international human rights.