Inspiration can strike anywhere. For Charlie Wachtel, it was a post he saw while scrolling through his Facebook feed. That spark led, ultimately, to Wachtel and his writing partner, David Rabinowitz, co-writing their first feature film, BlacKkKlansman , which will be produced by Academy Award nominee Jordan Peele and Academy Award nominee and Emmy winner Spike Lee as well as Jason Blum, Raymond Mansfield, Sean McKittrick, and Shaun Redick, and will star John David Washington, Adam Driver, Corey Hawkins, Laura Harrier, Topher Grace. From idea to screen, the project will have taken three years - a sprint in the film industry.

The heart of the project is the story of Ron Stallworth, a black police officer from Colorado, who infiltrated the Ku Klux Klan in 1979. He rose in the ranks and ultimately took down a chapter, exposing KKK members who were in the military and even at NORAD. Wachtel says, "It was a great story - stranger than fiction."

Excited to learn that the rights to Stallworth's book, a first-hand account, were still available, and that Stallworth was open to the idea of a film version, the writing team had to act fast to put together a script before anyone else tried to scoop their idea. The task at hand was to turn a procedural book into an engaging movie.

That was a challenge they could meet. Wachtel says that writing, and stories, were always his strengths. The professors at American University who impacted him the most all focused on the story - Claudia Myers, Matt McNevin, Larry Engel, and Pavel Jech in Prague.

Making it to Hollywood 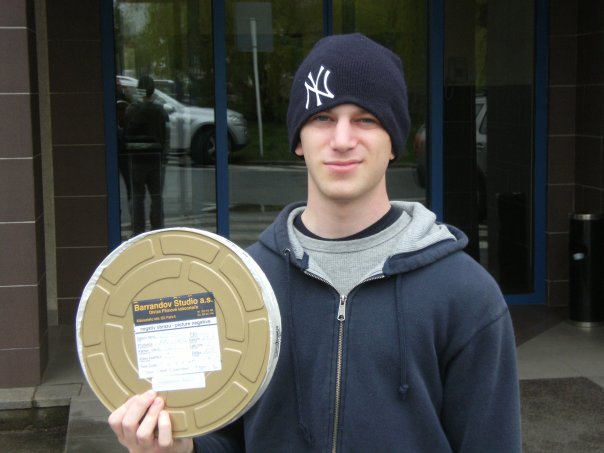 Wachtel, in Prague, holds a film reel of his final FAMU project.

None of this had come easily, or quickly. While studying at in Prague through AU's study abroad program with FAMU, Wachtel had discovered what it takes to make a film, and loved the many challenges. "It was an eye-opening experience, and it validated everything I had thought about filmmaking - you had a budget, you had to find your own locations, do the legwork, write the script, everything. It was great."

When Wachtel graduated in 2008, he moved to LA with no job lined up. "I thought I'd have to be a barista," he joked. Instead, his first job was as an unpaid intern at Warner Bros, and later took a position as an assistant at a talent agency. He floated through a lot of roles until ultimately it led to a job working with a producer, which had been his goal.

After holding a series of assistant positions, he decided to switch gears and start working as a copywriter at an ad agency. He was still working as a screenwriter and editor on side projects, but he saw marketing as a pathway to a career, using skillsets he had developed at AU and throughout his time in LA, and an opportunity to build his portfolio.

His work included writing new websites for small and medium size businesses, which led to working with Beachbody for two years, where he built up his professional skills, and directed and wrote spec commercials in advertising to build his film portfolio. He was getting so much professional traction, he even considered moving to NYC to advance in the ad industry.

But a passion for film had led him to LA, and he had learned a lot since arriving. "You don't learn everything in school," he said. "When it comes to your own work, humility is key." He laughs, remembering his first full-length screenplay, which he wrote for one of his favorite courses - professor Claudia Myers' Advanced Screenwriting. "It was a 1940s gangster film. It humbled me. I realized that I thought I knew what I was doing, but I didn't." 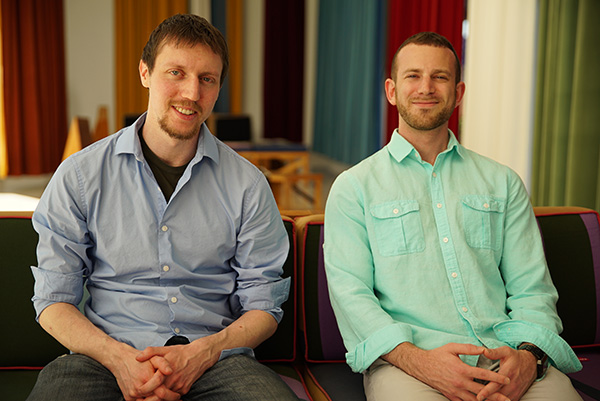 Reconnecting with Rabinowitz, with whom Wachtel had attended high school in New Jersey, was a game changer. The two used to collaborate on short video alternatives to final papers in their AP courses, and reuniting in LA, the two had co-written a TV pilot that scored them some meetings with managers, and led them both to realize that together they were able to produce superior work to their solo efforts. Wachtel explains, "When you have a writing partner, you're admitting weakness, but you're also sharing your strengths."

They started writing the BlacKkKlansman screenplay in the summer of 2015, and within seven months they had an offer. Wachtel had a connection with Shaun Redick at QC Entertainment, who had mentioned that they were working on Jordan Peele's film, Get Out. Wachtel described the BlacKkKlansman project, and Redick invited them in for a pitch.

"We met [Peele] a few days after he received an Emmy in 2016. It was surreal." But there were still a lot of questions. "Working with Jordan has been amazing. He's incredibly collaborative. He takes a lot of care in developing his work and takes pride in making things people can connect with."

Wachtel says, "When Spike Lee was brought on, it took the project to a new level. Spike Lee is one of my idols. I remember watching Do the Right Thing in college - it really had an impact on me. It was amazing to get a call and hear he took to our script and was all in on it."

Shortly after, Blumhouse and Focus Features signed on, and there was a desire to have it filmed in 2017. It is scheduled to be released in the United States on August 10, 2018.

"A lot of people in Hollywood get a big break and then flame out," said Wachtel. To avoid this, the writing team is staying busy - currently working on several projects, pitches, outlines, and just writing. One project, a thriller, took them to Cuba for research earlier this year. He won't share details, but promised there are thrills, a little comedy, and fodder for political discussion.