Over the summer Dr. Kurt Braddock joined the American University’s School of Communication (AU SOC) as an assistant professor in the Public Communication division. Braddock comes to AU from Penn State University where he spent the previous eight years teaching. Braddock’s research focuses on the persuasive strategies used by violent extremist groups to recruit and radicalize audiences targeted by their propaganda. He also explores how theories of communication, persuasion, and social influence can be used to inform practices meant to prevent radicalization among vulnerable audiences.

Braddock was pursuing a degree in Business as an undergraduate student at the College of New Jersey when the terrorist attacks of September 11, 2001 caused him to reconsider this course of study. He wanted to better understand why terrorists would target civilians, why people kill themselves to kill others, and how people engage with messaging. He began to immerse himself in books and other documents on the subject.

A Master’s degree in Communication at The University of Delaware let him take a deeper dive, and he wrote a thesis entitled “Looking Beyond Biology: The Impact of Psychological Gender on Small Group Leadership Emergence.” This laid the foundation for further study and Braddock went on to earn his Ph.D. from Penn State in 2012 where he studied under his mentors, Dr. James Price Dillard and Dr. John Horgan, and wrote his dissertation, “Fighting Words: The Persuasive Effect of Online Extremist Narrative on the Radicalization Process.” 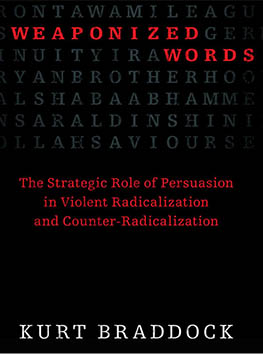 Braddock was interested in AU as it presented the perfect marriage between the work that his related both terrorism and communication, and because the position specifically addresses advocacy communication. This aligns with his work, “advocating for peaceful positions over violent positions”. He mentioned that at SOC in particular, faculty don’t study things just to study them, but rather to understand and apply what they’ve learned to real world problems, which he says is unique. AU’s location in Washington, DC was another factor influencing Braddock’s decision to come to SOC. He believes that research done in the academy needs to be communicated to people in the outside world who need to use it. Braddock is really proud that he gets calls from government agencies and international organizations because they want to understand the communication phenomenon around why people join and lead terrorist organizations. He considers it a real honor to be in the room with government officials where policy is created and knowing that he has influence on policy.

The interdisciplinary nature of AU also appeals to him, and while he has not formally set foot on campus as a professor, he is already a Faculty Fellow with the Center for Media and Social Impact and a Faculty Fellow with the Polarization and Extremism Research and Innovation Laboratory. Dina Martinez, the director of SOC’s Public Communication division, said, “I am excited to welcome Kurt Braddock to the Public Communication division as a new tenure track faculty member. His research and work in the area of counter-radicalization messaging is extremely meaningful and timely and his expertise is great addition to our division.”

Braddock recently published his first solo-authored book, “Weaponized Words: The Strategic Role of Persuasion in Violent Radicalization and Counter-Radicalization” with Cambridge University Press to positive reviews. Braddock’s work on attitudinal inoculation and counter-radicalization is a Top 5 paper at the National Communication Association this year in the Applied Communication Division. He is currently working on two other books.

His work is also attracting investment; Braddock was recently awarded a $568,613 grant from the US Department of Homeland Security's Target Violence and Terrorism Prevention Program. This project will help researchers and practitioners to develop tailored inoculation campaigns intended to challenge right-wing disinformation in online and offline spaces, ultimately reducing rates of violent radicalization and the potential for right-wing violence. SOC is leading the project, in coordination with a team of researchers from Georgia State University led by Professor John Horgan. 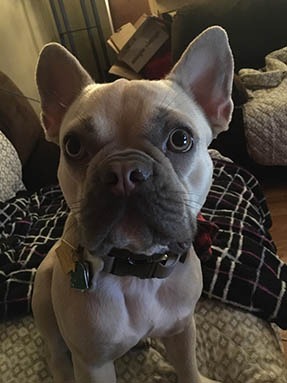 Braddock’s extensive experience teaching online from his tenure at Penn State will come in handy this fall, as he will be teaching two courses virtually, Public Communication Research (COMM-380) and Communication Theory (COMM-735). He’s excited to teach these courses and engage with the students. He believes that online learning has benefits and encourages students to reach out to their faculty members and ask questions, to be engaged in the discussion and limit distractions.

An avid ice hockey fan who was a goalie in high school and college, Braddock still occasionally gets out to play. Originally from New Jersey, his favorite NHL team is the New Jersey Devils. He also enjoys Cross-Fit and playing X-Box. Kurt is engaged to his fiancée, Brooke, and has a French bulldog named Sulley(pictured above).