What's it like to cover the White House in one of the most dynamic periods of American journalism? Cecilia Vega, SOC/BA '99, senior White House correspondent for ABC News, shed unique light on that topic, sharing insights on everything from the unprecedented and unpredictable nature of President Donald Trump’s administration to locking horns with the commander in chief on national television. See below for video from the event.

Speaking to a packed house in the School of Communication (SOC) Malsi Doyle – Michael Forman Theater, as well as a second overflow hall filled with scores more guests, Vega was one of the premier attractions on October 20 during American University's (AU) All American Weekend.

Vega, who holds a bachelor’s degree from the SOC journalism program, started out as a print reporter before making the transition to television coverage at an ABC affiliate in San Francisco. She credited SOC for helping her get established in the industry.

"Journalism is the type of job that you learn by doing. It's a craft, a skill that you hone over the years. And I didn’t know it at the time, but that foundation started here. And it started because of the professors who were working in the business while teaching."

During the hour-long Q&A that Journalism Division Director Amy Eisman moderated, Vega covered a vast range of topics, including: Does the president lie; what impact leaks in the White House have on her work; is there bias in journalism; and has Trump changed the future of presidential news coverage.

She also spoke about her reaction to the October 1 incident in which the president accused her during a Rose Garden press conference of "not thinking" and then challenged her on the questions she was asking.

“I’m just doing my job. That’s my North Star,” Vega told the audience. “I can get down and dirty and I have colleagues who do get down and dirty. That’s not my style. My style is to get answers. And I’m not doing anybody any good by duking it out with the president of the United States.”

She even shared personal aspects of the job, such as her daily routine, which she described with a humorous quip: “I have no life.” 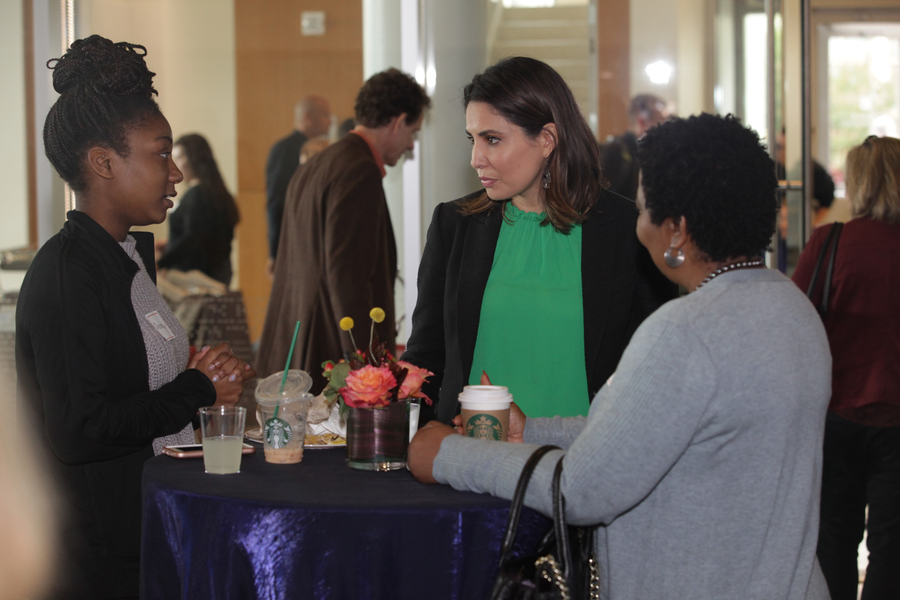 Vega chats with students, family members, and other guests attending the SOC All American Weekend reception in the school’s Media Innovation Lab.

Cecilia Vega on the Dangers of Being a Journalist Today

Cecilia Vega on the Need for Investigative Journalism

Cecilia Vega on How Trump Has Changed Presidential Coverage

Cecilia Vega on Leaks in the White House

Cecilia Vega on Whether There is Bias in Journalism

Cecilia Vega on the Heyday of Journalism

Cecilia Vega on her Daily Schedule