I arrived in Havana, Cuba with 10 other university students and a suitcase full of shoes. The shoes were a donation from Vans to a Cuban non-profit. The organization has representatives in the United States who reach out to people traveling to Cuba. At the time I didn’t think anything of it. In the past I’d known other people who brought entire suitcases of shoes to donate to refugee camps in Greece. But in Havana, that suitcase of shoes was illegal under Cuban law.

Imports are heavily regulated, making many items difficult to acquire including shoes and clothing. But even illegal, it was clear that we weren’t the only people who were bringing in large quantities of contraband consisting of common household items. On the plane almost all of the passengers holding Cuban passports were also carrying bags of toys, flowers or sizable quantities of other personal items. 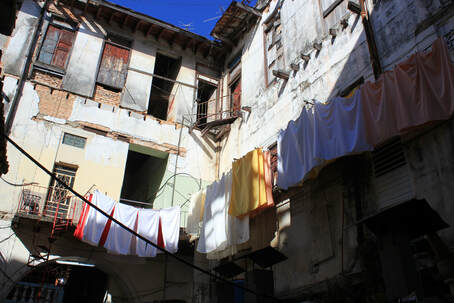 At the airport in Havana bundle after bundle of large, circular packages appeared in baggage claim. I watched security cut open a few of these bundles and inside were piles of items likely destined for Cuba’s private market.

The reason locals were importing items in bundles, instead of suitcases like we had, was that plastic wrap is lighter; people can bring more into Cuba without the weight of the actual bag. A Cuban tour guide, who works for a state-owned tour company and also as a guide in the private sector, explained that these people - and our tour group - act as “mules.” Our suitcases, even the ones not carrying a surplus of footwear, had all been stamped as searched. This happened again when I left Cuba. But nothing was taken, all 30 or so sets of brand new shoes remained in our possession and someone from the organization in Havana showed up at our hostel a couple of days later to collect them.

We loaded the back seat of his car full of the donations and he thanked us for our support in providing shoes for local children. Even though importing items in bulk for non-personal use is illegal, this practice is rarely prosecuted. Hundreds if not thousands of Cubans import necessities this way into Cuba every day.

The tour guide explained that mules can claim the items are for their families or friends; which is often at least partially true considering the number of shortages for common household products.

“If you come back from being abroad and you don’t bring back something for your friends, you’re called selfish and they’ll never speak to you again,” she said. “Anything can be a gift: chocolate, earrings… you say the gifts are for your family when you come back through customs.”

Acting as a mule is also highly economical, if you can afford the ticket and expenses to travel outside of the country. “You can bring 120 pounds into the country and the tax is in CUP, which is nothing compared to what they’ll make in profit,” the tour guide explained.

One CUP, or Cuban Peso, equals a quarter of a Cuban Convertible Peso (CUC), which is more or less equal to the US dollar. Though, according to an economics professor I met in Havana, “The CUC is over-valued. No one believes a CUC can buy a US dollar.” The CUP is used by Cubans mainly for government produced products such as staples at a state-owned market or state-run taxis. “The CUC is connected to the dynamic sector,” said the economist. Cubans supplement their rations of bread, sugar and rice with produce from private markets. The private markets do not suffer from the government shortages and, they offer people a wider variety and higher quality ingredients. All of the food I consumed during my trip to Cuba likely came from the private sector. Everything was delicious and all of my meals included fruit, vegetables and meat. But this is not the common diet for average Cubans.

The woman running the private hostel I stayed at explained that most Cubans don’t eat as many fruits and vegetables as I was served, but that the tourists are served those items because Cubans know foreigners like them.

A Cuban entrepreneur explained the private markets more in depth. Unlike many other people, his income is in CUC.

“The majority of Cuban laborers get paid in CUP, but everyone wants to buy things with CUC,” he said. “The government doesn’t have enough supplies for all Cubans to buy what they need. Limited supplies equals limited cash. Under a socialist state you cannot fire people. So places will have too many workers and can’t turn a profit."

The government issues ration cards, but everything else has to be purchased on the free market, which many cannot afford. 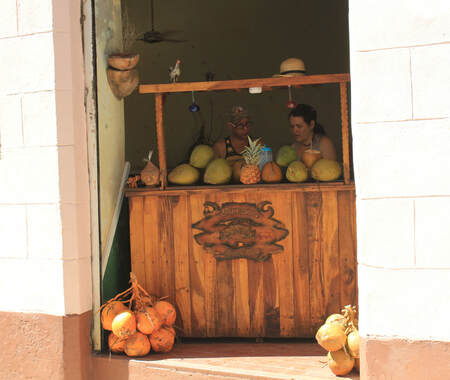 Future of Independent Business and Entrepreneurship in Cuba

This man who was an independent entrepreneur in the computer and technology sector, described the shaky future of the Cuban private market. He explained that Cuba’s socialist economy defines everything. Since 'business' does not exist in Cuba’s vocabulary, he is technically a 'self-service provider.'

“I’m able to create a business without calling it a business,” he said.

Examples of the first 64 independent licenses that were approved in the late 20th century were for hair stylists and masseuses. Now 206 activities can be classified as self-service. However, the entrepreneur noted that the laws could change at any time.

“Right now I have a license to fix laptops, computers and printers. There wasn’t a government company fixing these devices so it was an opportunity. I also have a license for software development and my business partner codes,” he said.

But the future of having multiple license is uncertain as previous crack downs on the private sector have limited the number of licenses a person could have in the past. Despite a shaky future, he says there are a lot more benefits than worries working in the private sector.

Working in the private sector, “You cannot become rich, but they don’t tell you how much ‘rich’ is. You just have to stay under the radar,” he said.

Succeeding in the Private Sector

Shoes and produce are only two example of how Cubans have adapted to laws and restrictions. Working around the system to access private markets is one of the ways people have found to survive or thrive.

A prime example of a thriving Cuban independent business venture was a clothing store run by three Cuban women. The women have created a brand of clothing based on hand crafted natural fabrics. Their biggest difficulty has been sourcing their product.

“Sometimes even if you have the money you can’t get the materials. Sourcing materials and thread is difficult. We can’t import, so how do you get that?” one owner said.

The owners described the way their company is able to access fabrics and threads. “We work with a small amount of fabrics,” said one woman. “We are not allowed to import for commercial purposes. We also can’t source things here. Stores in Havana don’t tell you the fabric content and don’t give you any guarantees on quality.”

She travels to places like New York City and purchases fabrics and thread. The product then sits in storage until she can arrange for enough mules to import it into Cuba or she brings it back herself, in small amounts.

“Our pieces are a lot like art; we only make a small amount. There might only be six of this piece in the world because we might not be able to find more fabric to re-make it again,” she said. 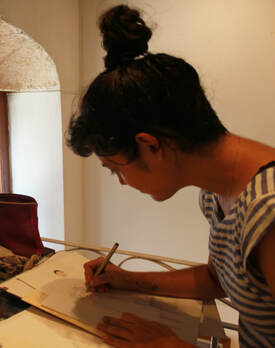 The goal of their brand is to increase opportunities for young Cubans and pride for locally made products. “A lot of Cubans don’t like Cuban made products,” she explained. “We’re a locally made Cuban brand. The quality of our pieces and the design is very important. Cuba needed a store that’s got items ready to wear day to night.”

“We tell younger generations look, we did this, you can do this too. We’re making it matter because right now all younger Cubans want to live abroad. We’re not getting rich off doing this. We’re doing this for us and the neighborhood, to give them a different perspective. This project gives us a purpose,” she said.

Her advice to younger generations?

“You need to travel and see the world. But there are opportunities in Cuba. The world wants to know about Cuba. You have the opportunity now. Take advantage of that," she said. "Try to travel. Save money. Go abroad and come back. Experience, but remember your roots. As Cubans we’re the only ones that understand, and it’s so hard to understand.”/ 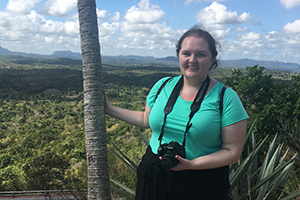 Hunter B. Martin is a graduate student studying global media with concentrations in multimedia and public diplomacy. Following her time at American University Hunter plans on pursuing a career in journalism specializing in foreign correspondents.

Hunter recently took part in an eight-day people-to-people exchange in Cuba. During that trip she researched music, art, dancing and Cuba’s private sector. You can find more of her work on her online portfolio: www.hunterbmartin.com.