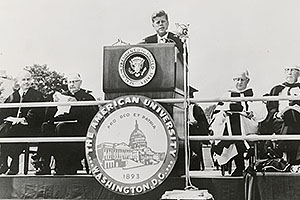 Whatever your political persuasion, it’s easy to be impressed with President Barack Obama’s State of the Union address performances. He speaks confidently, with remarkable command of detail, for almost an hour, and he won’t utter an “um” or an “uh” throughout the entire address. Most people do not talk like this, so it’s natural to wonder how some political leaders make the magic happen.

American University School of Communication adjunct professor Robert Lehrman has some answers, which he details in a new book he co-authored and co-edited called Democratic Orators from JFK to Barack Obama. Great political rhetoric and oratory require skill and preparation, for sure, but also a bit of artifice.

“Obama is, I think, a great speaker. But he uses a teleprompter so much of the time,” says Lehrman in an interview. Even during these speeches, he includes placeholder phrases before delivering his next line. “You’ll see him sometimes as if he’s thinking of the next word. ‘But people, we have to,’ he’ll say, though he’s trying to appear spontaneous,” he explains.

This book examines 12 Democratic political leaders from the past half century, including presidents John F. Kennedy, Jimmy Carter, Bill Clinton, and Obama, and key figures such as Hillary Clinton, John Kerry, and Jesse Jackson. Lehrman wrote a chapter on Kennedy and co-wrote chapters on Carter and Obama.

Like George Santayana’s oft-quoted concept of history doomed to repeat itself, speakers utilize the same rhetorical devices again and again. “There’s not a single thing that Obama or any other presidential speaker does that’s new. And the reason you know that is because there’s a Latin or Greek name for every single technique that they use,” he says.

That means not just borrowing from classic rhetorical and oratorical practices, but using repetition within the actual speeches. “In grade school, you’re taught not to repeat yourself. But in speech, repetition is the source of power for speakers. There’s a reason that Martin Luther King didn’t say ‘I have a dream’ one time. He said it many times,” says Lehrman.

Repetition at the beginning of sentences is anaphora. As Lehrman writes in the book, JFK utilized this in his “New Frontier” speech accepting his party’s presidential nomination at the Democratic National Convention in Los Angeles. “Then shall we be equal to the test. Then we shall not be weary. Then we shall prevail,” Kennedy said.

He also deployed antimetabole, which reverses grammatical order to make a line memorable. Kennedy said in his 1961 inaugural address, “Let us never negotiate out of fear. But let us never fear to negotiate.” Then-presidential candidate Obama paraphrased that same line in 2007 just before the Iowa Caucus.

Kennedy and Carter, in particular, provide an illuminating contrast in speaking styles.

Lehrman argues that the varied ways in which JFK speechwriter Ted Sorensen used repetition—alliteration, using words with the same suffix, etc.—set Kennedy’s speeches apart. “These distinctive styles and uses of a range of oratorical and rhetorical devices reveal a rich tapestry of communication which helped make JFK’s speeches compelling and convincing to his chosen audience,” he writes.

Even though public figures still rely on old practices, Kennedy helped usher in a new era of political communication. You’d be hard-pressed to find a human story or anecdote in speeches by Franklin Roosevelt, Harry Truman, or Dwight Eisenhower, but Kennedy told a lot of stories. These days, candidates inundate us with tales about people they’ve met on the campaign trail (such as John McCain’s ubiquitous “Joe the Plumber”).

“The concrete detail, the use of example, and the use of story are way different in this last 50 years than before that,” he says.

President Carter had a much tougher time inspiring audiences, Lehrman found. He mentions the many talented speechwriters who worked in that White House, including Hendrik Hertzberg, later a distinguished columnist at The New Yorker, and James Fallows, a star correspondent at The Atlantic. Yet Lehrman notes that Carter didn’t much care for speechwriters, and to his detriment ignored their advice.

Carter did grant his writers greater say over his 1979 “Crisis of Confidence” address, more commonly known as the “malaise” speech. Though much maligned today, Lehrman says that the speech was actually quite effective and led to a bounce in his poll numbers. “The question then is why Carter’s most important speech is not remembered as his greatest speech now and a key turning point in his presidency,” Lehrman and co-author Donna Jackson write.

As detailed in the book, Carter certainly had his shortcomings as a communicator. Yet domestic and global events were likely insurmountable, with inflation, the Iran hostage standoff, and the energy crisis all contributing to his defeat for re-election.

Rapid changes in technology have had a huge impact on how presidents communicate. Even preparing for an address is substantially different in the 21st century.

In Democratic Orators, Lehrman offers an enlightening story about Kennedy’s Soviet détente speech here at American University. Since Kennedy was staying in Hawaii beforehand, speechwriter Sorensen took a long flight to review the speech with him in person. A speechwriter today might email edits to a politician before a big speech, which makes reworking the text much easier.

Top aides also factor in the sheer volume of information that public figures must consume. In the interview, Lehrman recalls his own experience as chief speechwriter for Vice President Al Gore. Since Gore’s workload was so heavy, tailoring and perfecting each speech was virtually impossible. “Despite what people say about, ‘The president is always the lead author,’ and ‘There’s nobody who edits like he does,’ for most of the speeches—not the big ones—he has barely enough time to touch it,” he explains.

There’s a frequent complaint that public rhetoric just isn’t what it used to be, with some historians longing for 19th century wordsmiths like Abraham Lincoln or Daniel Webster.

Yet Lehrman emphasizes the vastly different world we inhabit today. In earlier times, presidents wrote their State of the Union addresses to Congress, and they rarely ever spoke in public—10 times a year at the most, according to one estimate. Obama speaks about 500 to 600 times a year, Lehrman says. And while George Washington might have given a speech to 150 Ivy leaguers, a modern president is talking to millions of people from all walks of life.

With this in mind, Lehrman teaches his students to keep their speeches simple. “What does a president need to do when he’s reaching 20, 30, 40 million people? There are tremendous limits. Also, speeches are written to be heard, not read,” he says. “You can’t go to Barack Obama and say, ‘I got your State of the Union speech. It’s profound, it has all your ideas, and 42 percent of people watching won’t understand what you’re talking about.’”

President Obama has spoken at American University several times. The most recent visit was August 2015. Read about it here.

Quality presidential rhetoric can fall on deaf ears, especially during these hyper-partisan times. “The idea that memorable speeches cause monumental shifts is not true,” he says. “Obama was passionate about gun control after the Sandy Hook shooting, but he couldn’t get even the most minimal stuff through Congress.”

Yet, every so often, rhetoric and oratory can move the needle and change history. In the book, he points out the legacy of Obama’s electrifying speech at the 2004 Democratic National Convention. If then-Senate candidate Obama hadn’t performed so well on the national stage, he might never have become president.