Kevin Merida, senior vice president of ESPN and editor-in-chief of the start-up, The Undefeated, spoke with School of Communication professor John Sullivan at American University April 5 about the intersection of race, sports, and culture, the theme of his digital platform.

“A Conversation with Kevin Merida” was led by Sullivan, a Pulitzer Prize-winning investigative reporter who is Senior Editor at the Investigative Reporting Workshop and embedded at The Washington Post. It was sponsored by the SOC Journalism Division and AU’s Center for Diversity & Inclusion.

Although Merida wouldn't share the project’s launch date, he hinted at the site’s tone: “I hope it will be smart, cool and have some swagger.”

Daniel Shiferaw, an MA student in SOC’s Interactive Journalism program, is eager to read about the athletes’ deeper layers. 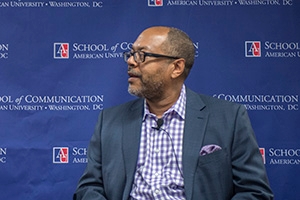 “I would like to see the publication cover everything from how the media treats certain athletes of color, to how contemporary black culture has affected the modern athlete, to highlighting how athletes of color are multidimensional people who break certain stereotypes,” he said.

The former Washington Post managing editor reflected on his years as a journalist, including starting the first black campus newspaper, BlackFolk, as a student at Boston University. He also talked about the transformation that he helped grow at The Washington Post, a place he had to think hard about leaving after 20-plus years.

Making that decision was difficult, yet exciting, he said, having been motivated by innovations in the newsroom.

“We had been creating little start-ups all within the Post,” he said. “It kind of made me think, can we go out and experiment some more?”

“Athletes are probably a lot more conscious than people realize,” Merida said. “What are they doing that we don't know about, what kind of conversations are they having?”

Shiferaw, meanwhile, is excited about the depth of the editorial team.

“Having such respected writers doing work with the complicated backdrop of race could be fascinating,” Shiferaw said. “The staff is not comprised of what some would call ‘race-baiters.’ It has writers who have done nuanced, detailed work in their respective careers, so turning their attention to racial issues in sports could prove to be very important.”