Hyatt Mamoun, a self-proclaimed “wild girl in the woods,” is in her first year of the film and media arts MFA program at American University School of Communication and is she is also working on a film project with the United Nations (UN).

The 22-year-old filmmaker focuses on wildlife documentary filmmaking. She said she has been in love with film since high school.

As a full-time student and graduate assistant at the Center for Environmental Filmmaking under Director Maggie Burnette Stogner and professor Larry Kirkman, she is excited to work on the UN initiative.

Mamoun said she can’t give too many details away about the project, but it involves climate change and will be shown at several climate change conferences with the UN. She leaves for Vienna, Austria later this winter to start filming.

The opportunity came about through a friend, who had recommended Mamoun as a “pretty solid filmmaker” to a relative working on the UN Climate Change. Shortly after, Mamoun got the job.

“I figured they would want somebody straight from National Geographic or something like that, but they know that I’m a grad student, and they still want to work with me, which is great,” Mamoun said.

Mamoun said she will edit her own film because she wants to be what’s called a “preditor.” 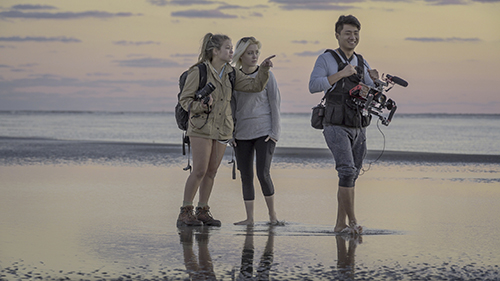 Hyatt Mamoun and her team on the beach of Kiawah island in South Carolina, at dawn.

Before coming to AU, Mamoun attended the Savannah College of Art and Design where she made her biggest film yet, “Fate of the Mustang,” for her senior capstone. The film is about the future of wild American mustangs in the West.

Mamoun and her team filmed in Arizona, Texas, Georgia, and Colorado, which is an annual destination for her.

“Fate of the Mustang” is still on the festival circuit but has already won big. The film went to the Wildlife Conservation Film Festival in New York City and won Best Student Film.

“All of this is paying off,” Mamoun said. “It still has a lot of festivals to go, but that was a big one. I was totally surprised and proud of myself that I made it this far.”

Her next goal for the 18-minute mustang film is to get it on TV. Her hope is for it to air on Rocky Mountain PBS because a lot of the film was shot and people were interviewed there in Colorado.

Mamoun, who is Lebanese, visits Lebanon every year. On top of that, Mamoun has been to Thailand, where she spent time “hanging out with elephants,” and Hong Kong, where she studied abroad for a couple of months.

“You have to travel to see what’s out there and film,” Mamoun said. “Travel is an essential part of this experiences and learning as a documentary filmmaker to really understand what your subject is and what stories need to be told.”

Mamoun said she couldn’t decide between becoming a filmmaker, a vet, or a zoologist when she was younger. One day, someone brought up Steve Irwin, the Crocodile Hunter, and she said she wanted to be “just like him.”

She has had to overcome some discouragement, but she’s pleased with her chosen path.

“Don’t be afraid of people thinking you’re weird,” Mamoun said. “I don’t want to do anything else, and I’ve been doing this for years, so just do what you want.”