Crystal Solberg, an American University (AU) film student, wants to make films of both artistic and social importance at the intersection of natural history and social issues. The second-year student in the MFA Film and Electronic Media program at AU School of Communication (SOC) is off to a good start; she spent part of her summer taking on new challenges, including filming wild animals up close for the Humane Society of the US Fund for Animals Wildlife Center in Ramona, CA.

It was Solberg's first opportunity to film wild animals, something she had been wanting to do for some time. While in CA, she was able to work with bears, coyotes, bobcats, even a pygmy hippopotamus.

Solberg, a 2017-18 AU Center for Environmental Filmmaking (CEF) Palmer scholar, learned about the opportunity through a campus visit from a HSUS staffer that was organized by CEF Director and SOC film professor Chris Palmer.

The Center takes in orphaned and injured wildlife for medical treatment with the goal of releasing them back into the wild. The Center also cares for nearly 40 full-time residents rescued from the exotic pet trade and other bad situations. Both rehabilitation and sanctuary roles were highlighted in this piece.

Solberg's charge from HSUS was to create two short videos about stories she discovered on site. This was different working and planning format than Solberg was used to, and two stories in two weeks was a lot of work. However, living on site at the sanctuary let her learn quickly how the Center worked and how, and gave her immediate access to all incoming animals, and a chance to watch each stage of the animals' journeys.

Solberg did initial editing while still in CA, and shared her rough cuts with staff on site to get feedback on portrayal and framing, but the fine tuning took place once she was back in DC, working with the HSUS to finalize the project.

While she captured film of several animals, her search for a story she could tell in full led her to center one video on an opossum who arrived, was treated and released while she was on site. Unfortunately, on the day Solberg thought she would be capturing the inspiring return to the wild, she learned that you can't script animals: the opossum put one paw out and then wanted to crawl back in the carrier and head back to the sanctuary. 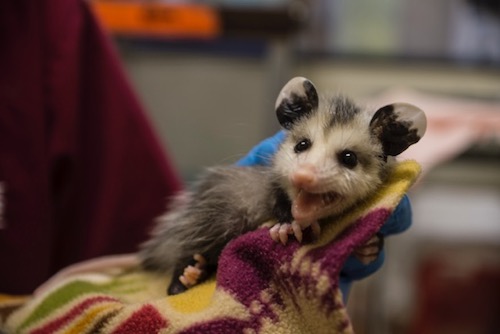 Her second video focused on the tribe of San Nicolas Island cats who live together as sanctuary animals at HSUS. Because they were non-native to the island, all of the cats were slated by government officials for euthanasia. The videos will ultimately make their way to the Center website, and bolster Solberg's already impressive portfolio. Meanwhile, Solberg has already been hired by National Geographic as an associate producer of on-line videos.