This week students came to the American University School of Communication (AU SOC) Malsi Doyle and Michael Forman Theater for an American Forum town hall on young people and the upcoming midterm elections. Students shared their views and engaged with a panel of experts about whether they plan to vote in November and what they think are the most important issues, from abortion rights to climate change and mental health.

This American Forum event, moderated by SOC professor Jane Hall, was a co-production between SOC, the Kennedy Political Union (KPU), and the AU Student Government (AUSG). The panel of experts included two leading political strategists, Democrat Celinda Lake and Republican David Winston, and journalist Seung Min Kim, White House reporter for the Associated Press and a political analyst for CNN. Kim is a graduate of SOC’s MA program in journalism. Hall, an associate professor in SOC and an award-winning journalist, is the longtime moderator of the American Forum series. 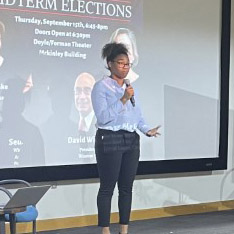 eld (left), director of KPU, introduced the topic, Chyna Brodie (below), the head of AU student government; Alexandra Drakeford, president of College Democrats; and Juan Villasmil, vice-president of College Republicans, posed the first questions. Brodie noted the age of political leaders in power in the White House and Congress today, and she said that many young people do not see their issues and values reflected prominently in politics and policies today.

Lake, who was one of two lead pollsters for president Joe Biden in 2020 and continues as a pollster for the Democratic National Committee and many Democratic campaigns, said that she was proud to have worked on the campaign that brought Alexandria Ocasio-Cortes to Congress. Lake said both parties should have younger candidates running and she urged all the students to consider running for office.

Winston, who has been an advisor to Republican leadership in th 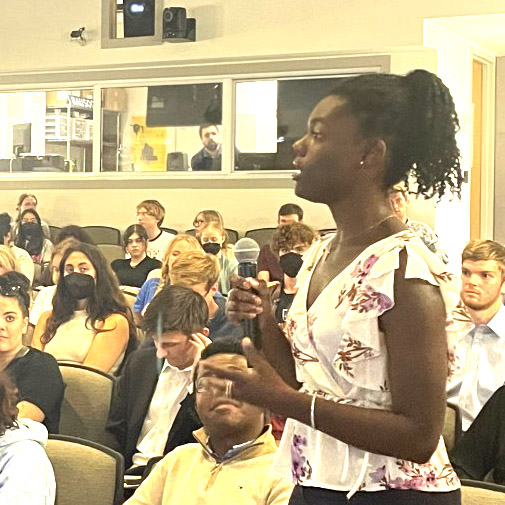 e House and Senate for the past 15 years, identified limited participation among young voters as a leading cause of this disconnect: "If you have only a few people participating, you're going to have a reflection of the few, not the majority. And so, I think part of the challenge here is understanding how to get involved in the process. If you're looking to diversify the process, you have to participate."

“The American Forum program represents democracy at its finest, bringing AU students together to discuss and debate the best course of action in our community," said SOC Dean Sam Fulwood III. "It doesn’t matter whether the students are Democrats, Republicans, Independents, or unaffiliated with party labels. What does matter is that they all come together to participate.”

In preparation for the event, students in Professor Hall’s Advanced Reporting class interviewed fellow students at AU and other local universities to include their perspectives, while her Politics and the Media class researched polling. They participated and asked questions along with students from across the university during the town hall.

Winston and Lake each identified what they believe to be the number one voting issue for each party right now. Winston argued that the economy is currently at the forefront for Republicans and for voters overall, while Lake said that abortion is a major driving issue for Democrats and other voters.

Policy and the elections were not the only questions on the minds of students, who also asked about diversity in journalism. Seung Min Kim drew on her experience as a journalist covering both Donald Trump and Joe Biden as presidents and their interactions with Congress to comment on specific campaigns and strategies this year. Kim was asked to share her experiences as an Asian-American journalist, and she said, "Being from a different community just gives you a broader perspective, perspectives that are needed to inform your reporting."

American University Generation Z students took on the streets of the DMV to ask other students from other universities whether they would be voting in the midterm election, why or why not and what truly motivates them to get out there and vote!