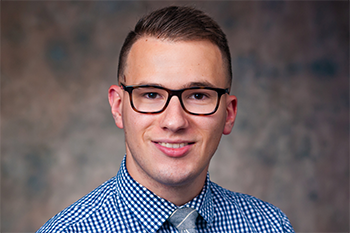 There’s still something thrilling about it, days after the fact, when I catch a glimpse of impeachment coverage on the television or hear a podcast snippet about one of the public hearings.

I remember that; I was there.

When I picked up my life this summer working at a small-town daily newspaper in western Kentucky and moved to the fast-paced media metropolis that is Washington, D.C., I couldn’t have imagined what opportunities I would be afforded in just the first few weeks I was here.

I enrolled in American University’s Journalism and Public Affairs graduate program partly to build the credentials needed to be one of the reporters called on to cover historic moments of national importance like the impeachment of a president.

I hardly expected it would be a class assignment.

For the first month or so of my class called Reporting of Public Affairs, my congressional assignments were, as best I could surmise, normal. That is, I covered hearings on terrorism threats at domestic chemical facilities or the rise of shadow Russian merceneries in third-world countries. Each hearing was its own fascinating experience, but, to be fair, they all amounted to “business as usual” on Capitol Hill.

But when House Speaker Nancy Pelosi announced the start of an impeachment inquiry into President Donald Trump’s dealings with Ukraine this fall, the mood in Washington, and thus the type of assignment my colleagues and I took on, were anything but normal.

My first crack at impeachment coverage came when European Union Ambassador Gordon Sondland testified to the House Intelligence Committee that there had been a “quid pro quo” involving a valuable White House meeting and military funds for dirt on one of Trump’s political foes.

That moment inside the massive Longworth Office Building hearing room was as palpable as it has been described to me. You become quite close with your neighbors in a hearing room setting like that, mostly because you have stood in line with them for hours just for the chance to be there when the committee gavels into session. Those sitting around me -- such as tourists, political junkies and activists -- audibly gasped, because they, like me, understood the gravity of what was being said.

Sondland’s verbal exchanges with lawmakers kept the 100 or so onlookers in near-silent awe.

And it’s important to note just how few people really are in “the room where it happens” when, well, it happens. Room 1100 in the Longworth House Office Building usually seats about 150, but that’s without at least 50 reporters and photographers from around the world, plus a slew of congressional staffers and U.S. Capitol Police.

With a tight squeeze, the committees can usually make room for about 100 members of the public, so that means the line to be one of those select few inside usually starts forming at about 5 or 6 in the morning.

Once inside, though, the room is breathtaking. It’s usually home to the House Ways and Means Committee, but it’s also the largest room on the House side of the Hill, so it’s commandeered by higher-profile committees when their hearings demand it. The oval hearing room with its domed ceiling and eagle-adorned eaves is impressive each time you see it.

No sitting in the hallway

That brings me to my second impeachment hearing. Near the end of my first semester in graduate school, I had the chance to attend the House Judiciary Committee’s opening session on impeachment, just a day after the intel committee had released their findings and quite some time before we knew a full floor vote was all but certain.

The previous hearing with Sondland had been packed, with lines stretching nearly the length of the office building. So I arrived early to the judiciary committee hearing as well. I took a cab from my apartment in Silver Spring, Maryland, and arrived shortly before 7 a.m. It appeared, however, that a slate of constitutional law experts didn’t have quite the same appeal as a Trump insider, so I ended up just fourth or fifth in line and waited for a little more than three hours.

Capitol Police don’t allow you to sit in hallways, even if you’re waiting in a long line for hours on end. I tend to get restless in situations like that, so I struck up a conversation with the gentleman in front of me. He interested me, because, instead of keeping his head bowed to the glow of a cell phone screen like the rest of us, he had a drawing notebook in his hand and he kept glancing up and around him as if he were taking careful notes.

He was sketching the entire scene -- all the people in line and the walls and ceilings of the House office building we were in. He told me he was a freelance artist who was working with a publication in California to graphically illustrate the impeachment hearings as part of a political cartoon. A New York City native who had only recently moved to D.C., he said he was trying to find work sketching closed legal proceedings; a high-profile impeachment cartoon seemed a prime opportunity to build clips, he said.

What do treason, bribery mean? The committee, led by Rep. Jerry Nadler, D-NY, heard from four legal experts on impeachment as a law. Three law professors invited by Democrats on the committee and one by Republicans linked Trump’s behavior to their own interpretations of the impeachment clause in the Constitution.

It was astonishing to me how simplistic that legal approach to the clause is. The concept of impeachment — even of a president — isn’t new to the Congress, yet, it seems, lawmakers are still debating what the words “treason, bribery or other high crimes and misdemeanors” mean.

What was equally eye-opening was when attorneys on behalf of Democrats on the judicial committee dropped hints about the types of charges they might levy against the president based on testimony thus far. At the time, we didn’t know what articles the committee would ultimately draft, and it was interesting to see the internal debate play out in person over the inclusion or exclusion of findings in Robert Mueller’s special investigation into Russian meddling in the 2016 election.

School was over. News wasn’t.

I had a rare day off school and work recently, a week after that hearing had taken place and as end-of-the-semester exams came to a close. Oddly, I took that opportunity to get up early once again, walk to the Metro and take it to Capitol Hill as I had most of the semester.

I attended an unrelated hearing on bullying and harassment in the U.S. Coast Guard, and, as I had done so many times before, took the underground tunnel to the Longworth cafeteria for a hurried bite to eat.

As I guided my tray past the endless field of suits and professional dresses, I caught sight of Nadler, sitting at a near empty table, with only a staffer at his side. Nadler, whose face had been splashed all over TV screens worldwide for weeks, was reading the day’s paper and working his way through a plate of fried chicken. I didn’t talk to him. I didn’t approach him. He wouldn’t have known me and it wouldn’t have been professional to do so anyway, I thought.

But as I sat there with my own food and glanced up to see the chairman enjoying his lunch, strangely, the impeachment process came into focus for me again. If there’s one thing the impeachment of a president has shown me these last few months, it’s at the heart of all the political showmanship and aesthetic grandeur, these men and women are real people, just like me. They all started somewhere and climbed the ladder to where they are today. They jumped at opportunities, they made mistakes but they never stopped trying, no matter their party affiliation, to do what’s right for their constituents and the country.

That’s a lesson learned covering any part of the political process — an impeachment hearing, the markup of a bill or even just watching lawmakers enjoy their lunch in a crowded cafeteria.

I’m never going to forget my front-row seat to history. But I also don’t intend to make it my last.

Austin Ramsey is a graduate journalism student at American University and a reporting fellow at the Investigative Reporting Workshop. He is also Washington Post practicum student and president of AU’s School of Communication Graduate Student Council. Before AU, he was a city government reporter at the Messenger-Inquirer in Owensboro, Kentucky.