James Brown, host of “The NFL Today” on CBS and “Inside The NFL" on Paramount+ will address graduates of American University School of Communication and School of Education Saturday, May 7 at 9:00 a.m. Brown has won many awards, including three Emmys, the Pro Football Hall of Fame’s 2016 Pete Rozelle Award, and was named “Best Studio Host of the Decade” by SI.com. After graduating Harvard University as a three-time all-Ivy selection in basketball he entered the corporate sector before beginning his broadcast career in 1984 covering basketball in his hometown of Washington, DC. His career spans many programs and networks, including 11 years hosting “Fox NFL Sunday” before transitioning to CBS, where he had worked prior to Fox. Brown sat down with SOE and SOC to answer a few questions about education, his career, and advice for graduates.

Q: Why did you agree to become the speaker at AU’s School of Education and School of Communication commencement?

A: Communications and education go hand in hand, and I see how important the encouragement, or lack thereof, that an educator gives to a person, can be. I shared that with Robert Kraft, the owner of the New England Patriots, when we were doing a series of television programs after the tectonic shift in society with the murder of George Floyd. There's been a preponderance of programming, hopefully educating all of us on how we are better together. Being old enough to have been a witness, I can say that the civil rights movement itself was not effective until it became global news on TV, when people of good character and integrity saw quite simply that what was happening was wrong. Then everybody got involved. I only hope that I will have, as a result of my experiences, something meaningful that the graduating students will find helpful in terms of what they need to keep in mind going forward.

Q: I read about you that you were discouraged from the medical field by a teacher when you were about 11, dealing a blow to you. Do you have a positive experience with a teacher who made an impact?

A: Yes, as a matter of fact, it was my French teacher in middle school who defused a lot of what I had internalized as rejection. Many people sadly equate their worth with the number of rejections that they've received, which reinforces in their minds that they are of no value to society. I'm incredibly humbled that my French teacher made it clear to me. She was more parental in her encouragement by saying, “You are absolutely gifted to be able to do anything that you want. What you're most passionate about would lead you to be the most impactful. So, do not let somebody else's attitude or perception or stereotype about you limit what you want to pursue.” She reinforced what my mother principally shared through words and my father taught me by example, working 2 and 3 jobs. They said that success is as much—if not more—related to perspiration and inspiration as opposed to anything else.

Q: We talk about how we equip our students to become changemakers in the world. What changes that you've made resonate most for you?

A: I come from the world of sports, mostly team sports, having grown up in a family of five. The word “team” is really important to me. When people are working in or with teams that are diverse and inclusive, they come away with an understanding that gifts are not unique to any one given social class, ethnic group, etc. That is what I’ve tried to stress in my work environment. Oftentimes in my early career, whether it was at Xerox, in corporate America or Eastman Kodak, and then making the radical switch to broadcasting, I was one of only a few. Sometimes the only one. I remember my daughter asking me, “Daddy, you're the only person of color in many of these pictures that I'm seeing. How did you handle that?” My point to her was that I refused to allow the perceptions, stereotypes, and how people might want to marginalize me affect what it was that I felt I could accomplish.

Q: What advice would you give to students aspiring to have the kind of national media presence you now have, whether it's sports, journalism, or other avenues?

A: I think the goal is to aim for excellence as opposed to a global or national platform, because I think it places the emphasis in the wrong place. Just because you've made it to a national level does not necessarily mean you're bringing some value and excellence to the table. I tell youngsters, even in elementary school, that people are watching you, and how well you handle given responsibilities at each level along the way. Extracurricular activities are as key a component to that as academic excellence. Engagement in programs that are inclusive will prove to be much more beneficial as you move to higher platforms.Q: What advice would you give to students aspiring to have the kind of national media presence you now have, whether it's sports, journalism, or other avenues? 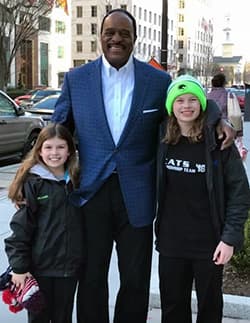 Q: How has your approach to sports coverage evolved over your career?

A: My focus has been more on the individual. There are those in my business who would put me under the table if it came to the recall of stats and specific accomplishments. That's not me or my interest. Sure, your win-loss record is important, that's a given, but I wanted to know more about the people. What motivated them, what their background was, how they exhibited leadership on the team. Some are quiet leaders, but they are the hardest workers on the team and in the organization, talking principally from the world of sports. These are principles and precepts that apply across the spectrum, no matter what the work environment is. So, tell me about that person, because that would tell me about the strongest links in the team. Others are watching more of what that person does than what s/he says, and that contributes significantly to the success of the whole.

Q: From sportscasting to your work to try to end domestic violence, you keep an incredibly busy schedule. What's your secret to focusing on what is important to you?

A: I work diligently, trying to maintain my work-life balance. I try to make certain that my home life—my main responsibility—is my nuclear setting. It is far more important than even the work, because it does fuel what I do in my work. Let me be clear, I have not mastered that. Probably being a grandparent underscores that even more to me. During the football season—the travel season—I am on the road every weekend for about five months. Other than being an ordained minister, which defines who I am, what I find myself thinking and getting most excited about is my grandkids and the lessons that they are learning. Am I pouring into them by sharing what are meaningful experiences, and contextualizing what’s happening in the world, all with an aim of helping them to become change makers in a fashion that benefits society?

Q: I want to ask you about your Harvard undergraduate experience. What was your favorite life lesson there that sticks with you today?

A: I am a first-generation college student. My mother and father, God bless them, both had high school diplomas. My dad worked two and three jobs to provide for the family, so that my mom could be the excellent homemaker that she was, but they had Ph.D.s in drive and determination. They said academic excellence was the foundation stone and the key to success in the work world. What I saw at Harvard were hard-working, gifted students. But for many, Harvard was almost like a sabbatical because they had prepped at some of the finest schools before going to college. The Harvard experience underscored for me that hard work is the great equalizer, proving the truth of what my parents told me. I was mindful of what my parents and that teacher told me: Simply stated, maximize what you're doing in the classroom to the best of your ability; never lose the hunger and the desire to grow in learning because it never stops.

Photo above: “Uncle JB” enjoying a day out with Olivia (left) and Kate (right) Williams in March 2018, both competitive swimmers, as they were in Washington DC sight-seeing. Recently, Kate met with the swim coach at American University, showing interest in possibly swimming there.