When Hyatt Mamoun came across a National Geographic article about the Bahamian conch, the giant shelled snail that is a cultural icon of the Caribbean, she was shocked to learn that  the population of Bahamian queen conches is being decimated by overfishing. This could lead the sea slugs, known for their brilliant pink-lipped shells and prized as a cuisine, to go extinct in as little as 10 years.

“It was a huge, huge thing. The conch, the symbol of the Caribbean… that’s going to be gone. The article was great, but I wanted to explore it more, physically,” Mamoun, an American University School of Communication (AU SOC) MFA Film and Media Arts student said. So, she decided to apply her skill as a filmmaker and passion for the environment to make a difference. She enlisted some of her fellow students, who, like her, are focusing on Environmental Filmmaking at SOC. In March, after a whirlwind fundraising effort, Mamoun and her team travelled to the Bahamas to start production on Bahamian Queen, a film about the conch and the threats it faces. 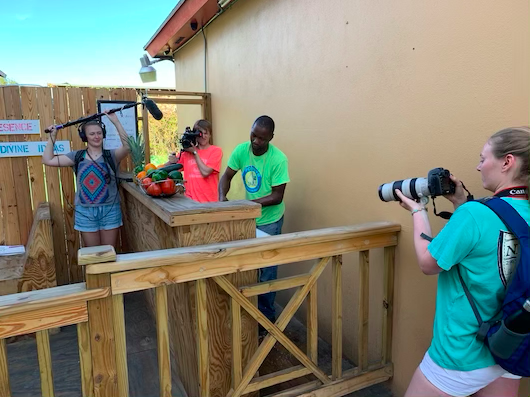 In her award-winning film about American mustangs in the West, created during her undergraduate studies at the Savannah College of Art and Design, Mamoun had used her time filming to learn more about the issue from people on the ground. She wanted to use the same technique with the film about the conch.

The experience was something of an adventure. Beth Ebish, a graduate assistant in the Center for Environmental Filmmaking, ran location sound and some of the underwater cinematography on the shoot. “We learned a lot about the challenges of filming outdoors in the beach/ocean environment.  Beyond taking care of our equipment, meant getting sunburnt, swimming through swarms of jellyfish to get our shots, and driving on the left side of the road,” she says. Bahamian Queen won a $1,000 Neel Foundation Scholarship at the 2019 SOC Visions Awards.

Kathleen Gaeta was field producer and production coordinator, handling logistics and liaising between the team and local officials and interviewees. “It was an equally challenging and rewarding experience…” she says. “We had an absolutely incredible team which made accomplishing all of our goals possible.” Other members of the team included Grace Eggleston and Nick Tucker, both cameramen on the film. 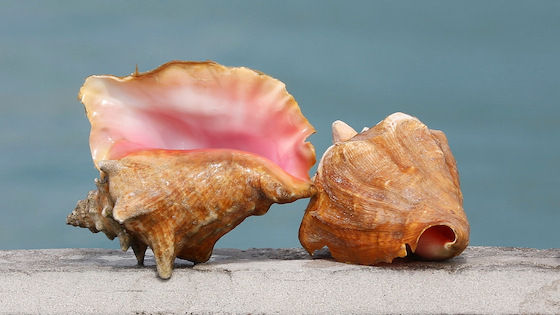 The film is currently in proof format, and Mamoun wants to go back to the Bahamas to film at a local festival dedicated to the conch to add to it. She describes being very inspired by what she heard from locals on the ground. “The conch means so much to Bahamian people, it’s a huge part of their culture. It represents a lot for them,” she says, of the implications of the species’ loss.

The loss of the conch would be an economic as well as cultural devastation, because thousands of fishermen could be out of work. Mamoun was shocked to discover the layers of illegal poaching, corruption, and the exploitation of impoverished locals that are contributing to the conch’s decline.

Poaching depleted the conch population in the Florida Keys until it hit zero in the 1970s, which caused even more poaching in the Bahamas. Mamoun hopes that her film, after it is finished, can be used to educate people about the threatened creature and present solutions to the problem. “I just want to make to be able to average person feel like they can make a difference. The end is not here yet.”