Capitol Hill reporters are always on the move.

The job means navigating the halls of Congress for a quote, watching and reporting the twists and turns of legislative drama, and then dashing out to the street to talk to protesters, advocates and citizens impacted by legislation you are covering.

Many journalism students dream of being part of this fast-paced world. Among them: American University School of Communication (AU SOC) senior Gabe Ferris, who spends his time as a Pennsylvania Avenue Unit Intern at ABC News.

“It’s an amazing opportunity. My experience has been incredible,” says Ferris.

The ABC News internship is unique as it has allowed him to cover not just Congress but also the White House. The position had long been on his radar, since Ferris thought it could really jumpstart his journalism career. It has allowed him to meet and learn from a string of SOC alumni who are covering politics and policy for ABC News or other news outlets. 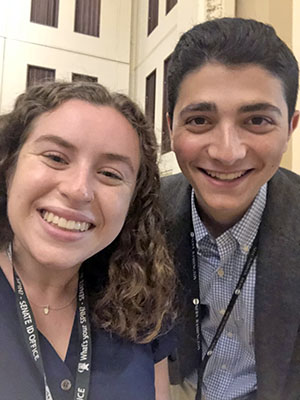 “It’s nice to know when I’m walking the halls of Congress or the White House, and I see someone who is years ahead of me [career-wise], that they were once a student at American, too,” he says. That includes SOC alumna Cecilia Vega, who is now ABC News’ Chief White House Correspondent and has been in the network’s White House booth when Ferris is there. Ferris also ran into fellow students, such as Nina Heller, current editor-in-chief of The Eagle and summer SOC Dean’s intern at The Durango Herald. (see photo)

ABC News’ prestigious internship program traditionally lasted only one semester. But it was expanded into a six-month position this year, from June 2022 through early January 2023. As a senior, Ferris was able to work with faculty and advisors to allow his class schedule to accommodate this experiential learning opportunity, which is allowing him to develop skills on the job.

“Whether it's a new software at work, or interviewing skills, or sitting in on the Press Secretary’s briefing here in the West Wing –– I'm learning, observing, and soaking new things up every single day,” he says.

On Capitol Hill, “sometimes [ABC News] sends a full camera crew and other times I have the opportunity to go looking for lawmakers to capture footage and content myself. So much of the day on the Hill builds on every update. During the gun reform negotiations, Senator Chris Murphy would come out and give us an update nearly every hour, which told us which direction to go next.”

Covering one piece of legislation, The PACT Act, which is intended to provide assistance to veterans who were exposed to harmful chemicals through their military service, gave Ferris a 360-degree view of the process. After passing the House, it was assumed the PACT Act would sail through the Senate, as majorities of both parties had expressed support. However, at the eleventh hour, some Senate Republicans balked and withdrew their support. ABC News heard that there were protesters gathering on the Senate steps. ABC sent Ferris to investigate.

Outside, he found a growing group of veterans and the families of others who had served, all advocates for the measure. He started talking to them and learned most of them had family who had experienced severe, negative health impacts from the type of chemicals covered by the legislation. Some had been fighting for decades for Congress to act.

“I was with them for the better part of the morning and afternoon shooting video, asking them questions, and learning about their story –– why they were there, and why this was personal for them," he said. 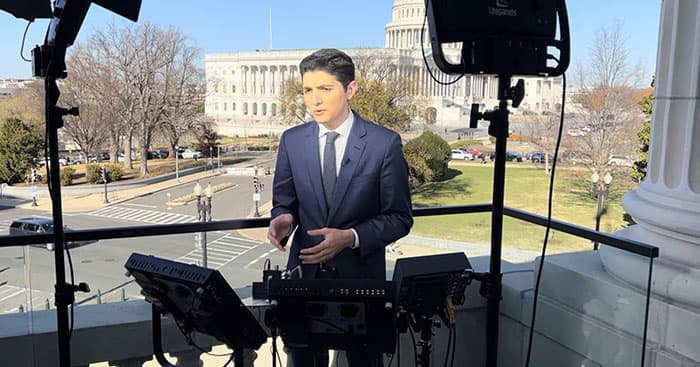 Over the course of a few days, Ferris and the protesters got to know each other. They would share any updates they had with Ferris, which he would report back.

Then, he was there in the Senate gallery when the final vote went through, 86-11 in favor. He could see the very people he had spoken to outside the Capitol, including top legislation advocate Jon Stewart, in another section of the gallery. Senator Kirsten Gillibrand, D-NY, brought many of the protesters in the Senate gallery as guests.

The next time their paths crossed was at the White House, where Ferris had recently been assigned, at the signing ceremony for the bill. “I was in the East Room of the White House with President Biden, as he signed it into law. Sure enough Jon Stewart was there, and many of the veterans and protesters who I first met on the Hill were there in the East Room. It certainly puts into perspective our work.”

He also had a front-row seat to the landmark gun legislation that passed in June after the shocking school shooting in Uvalde, Texas. SOC Alumna and news photographer Anna Moneymaker helped put Ferris in front of readers across the country when one of her photos of Sen. Chris Murphy, D-CT., which also included Ferris, was picked up by several outlets. After passage of the Inflation Reduction Act, he again made a cameo in a photo of Senator Warnock, D-GA, by Patrick Semansky for the AP. 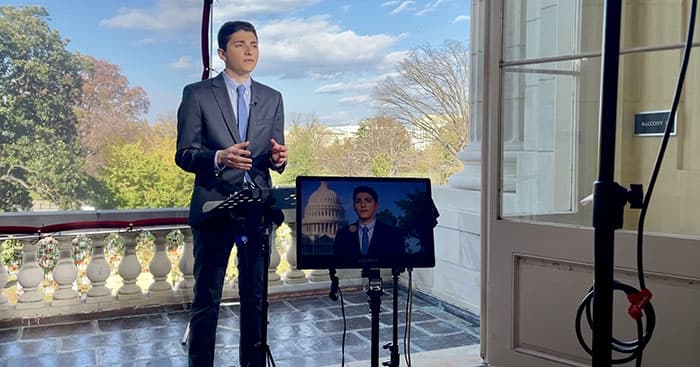 Building the Resume to Earn an Internship with ABC

COVID-19 hit during the spring of Ferris’ freshman year and kept him from the summer job he had lined up with SOC’s Discover the World of Communication program and dreams of internships. The summer before returning to campus as a junior, he had a hard time competing for internships against older students who had pre-COVID-19 job experience. “What I did was really focus on The Eagle, as a copy editor, and ATV, where I was general manager last year. I was still reporting and getting great experience.”

Before ABC News, Ferris covered a very different beat as an SOC Dean’s Intern for Current, a nonprofit news organization covering public media in the U.S for professionals in the industry.

“The audience lives and breathes public media and I'm somebody who went into the internship only having listened to NPR on my morning podcast app. I really had to get it right, and I had to study the industry,” Ferris says. He credits Current Digital Editor Mike Janssen and Managing Editor Karen Everhart with helping him get up to speed on the public media industry.

In the long run, Ferris plans to stick with political reporting and aspires to be in front of the camera. He says that his Pennsylvania Avenue internship with ABC News has re-affirmed his interest in journalism and reporting on politics.

“I'm starting to get a clear sense of where I want to end up and what I want my career goals to be,” he says.