In an increasingly digital and globalized world, local still matters, and investing in neighborhoods is more important than ever. That conviction lies at the heart of School of Communication professor Benjamin Stokes’ new book, “Locally Played: Real-World Games for Stronger Places and Communities,” which explores the power of games to increase citizen participation, engagement and economic activity.

Stokes is currently an assistant professor at SOC, where he teaches in the Game Design MA/MFA programs. He also runs the Playful City Lab, where he collaborates with graduate-level researchers and game design students to investigate how cities can use playful tactics to build stronger, more equitable communities.

But Stokes’ interest in the power of play began long before he arrived at AU. In 2004, he co-founded the organization Games for Change, which runs the leading festival for pro-social games. 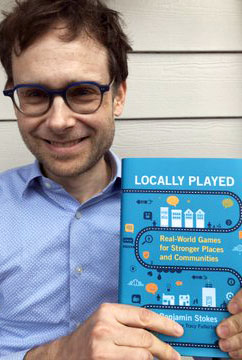 One of the key lessons in “Locally Played” is that games, especially those that combine the physical with the digital, can increase engagement with local events, landmarks and businesses. And the outcome can be both powerful and quantifiable.

For example, the game “Macon Money,” which was designed to bridge neighborhood and cultural divides in Macon, Georgia, also directed an infusion of real funds to locally owned businesses. And, in Philadelphia, the public library system remixed Pokémon Go with custom maps and “PokéCrawls” to guide players around cultural landmarks to affirm the neighborhood identity.

Stokes hopes his research, including new findings on the local impact of games, will capture the imagination of game designers and city governments alike.

For traditional game designers, “Locally Played” offers a new framework for thinking about games. Instead of pursuing a single breakthrough that looks the same in every city, he argues that success often depends on games that are adapted for specific cities and local culture, especially for community empowerment.  He hopes that funding will be easier to secure for local games with the evidence provided in his book.

Stokes also seeks to inspire city governments and planners to incorporate more playful strategies into their everyday programming. For them, the book offers examples of high- and low-tech solutions. Adding a digital component can sometimes broaden the audience and facilitate more interaction. But he warns that innovation is not always about creating a new app, or better graphics. “Connecting several forms of media together often leads to more novel solutions than the visuals of augmented reality or VR,” he said. “Paper is surprisingly overlooked by technologists. Bulletin boards still matter.”

A fascination with the tension between global and local drew Stokes to D.C. and American University. He notes that while D.C. is a powerful city in policy terms, it also has a rich local culture, not least among the generations of African American families that have shaped its history. In a time of rising prices and gentrification, the need for D.C. residents in particular to “think both locally and nationally is a telling paradox,” he said.

D.C. is also fertile ground for new research and collaboration. Stokes’ team recently had a design featured in the District Architecture Center, with an interactive mapping project to “Show Us Your Alley” as part of a show called “Alley Hoppin!” He is simultaneously working with the Smithsonian and the D.C. Public Library on an interactive storytelling system tied to local history.

Stokes is eager to point out that SOC is an ideal school for this kind of research. Not only is the graduate game design program one of the top-ranked in the country, it is uniquely focused on policy and real-world impact. The university is also significantly increasing its local engagement in D.C. as a community, both at the student and faculty level.

“It’s exciting to have a home institution that is working hard to engage locally, while also thinking about policy and play. There are lots of places that do one or two of those, but all three in one place is really special,” he said.

At SOC, Stokes has also been able to collaborate with outstanding students in the lab, where they experiment with ideas by “thinking through making.” He says the team, which includes PhD students and game designers, “has been a fantastic group to co-design and think with.”

“Locally Played” was published by MIT Press on April 14. “So many of the pioneering books in Game Studies have come from MIT Press,” Stokes said. “It’s such a fantastic set of authors to join.”