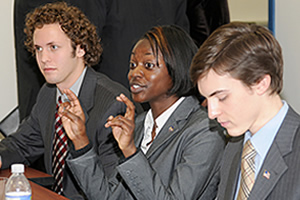 Mike Minnick was hunched over his laptop in a classroom filled with the aroma of Subway sandwiches and the tapping of keyboards. It was lunchtime at the SPA Campaign Management Institute, and teams of students were using the break between expert speakers to figure out how to get their candidates elected.

On Minnick’s screen was a color-coded map of Virginia radio markets. He and his team had been handed a stiff challenge: prepare a 150- to 200-page campaign plan to bring underdog Republican Jim Gilmore to the U.S. Senate.

His teammate, fellow SPA sophomore Jason Oliver, leaned over and pointed at the screen like a television commentator. “Our main voters are from these more conservative areas,” Oliver said, moving his finger in an arc around southern and central Virginia and landing in Norfolk. “We’re looking to increase our amount of voters in these areas, while taking back the military voters.”

The Campaign Management Institute is in its 25th year of preparing students for the world of politics. It teaches the techniques and tactics of political campaigns: developing a strategy, framing the message, raising funds, working with volunteers, attracting the media, and much more.

They are assigned the job of crafting campaign plans for each Senate candidate in three key races: Virginia, New Mexico, and New Hampshire. It’s a lot like a real campaign, except much more compressed and, in some ways, more intense, said SPA’s Candice Nelson, academic director of the institute. Students in the institute spend all day learning from the experts, and long hours on evenings and weekends putting together their plans.

Last week, Republican pollster Jim Burton and Democratic strategist Scott Simpson came to discuss one of the hot-button issues of 2008: illegal immigration. Burton is from Public Opinion Strategies, whose founder, leading Republican pollster Glen Bolger, was an AU student in one of the first Campaign Management Institutes.

Students like Minnick and Oliver listened carefully. They needed to know how this issue might affect their candidate, and how to get it to work in his favor.

Illegal immigration won’t be as key to voters’ decisions as the Iraq war, the economy, or health care, the panel said. But it’s one of the issues that can turn the tide for a candidate in the primaries and could influence the general election by increasing voter turnout among Republicans.

“The people most fired up [by illegal immigration] tend to be Republican base voters,” Simpson said.

Democrats, on the other hand, have good reasons not to bring up the topic. “There’s no way, if you’re a Democrat, that this is an issue you can win on,” Simpson said. “When someone asks about immigration, it’s not like they’re handing you a present. Your voters aren’t fired up about it, and you’re not talking about the fact that [your opponent] voted for the war.”

So Democratic strategists are likely to advise candidates to answer briefly and change the subject, while Republican campaigns are liable to bring up the issue repeatedly in the hope that it will energize their base.

During the two weeks of the campaign institute, teams of five or six students work jointly on their assigned plans, which they must research, present, and defend at the end of the session to a panel that includes Nelson; program coordinator Carol Whitney of Whitney and Associates; Liz Chadderdon, president, the Chadderdon Group; and assistant director Brian Brown.

The students aren’t always assigned to work for a candidate they’d choose themselves, and their job isn’t to argue pro or con. They just have to come up with a good strategy for winning.

Minnick and Oliver, pushing for an underdog Republican with low poll ratings, were planning to stress traditional “Virginia values,” “Virginia families,” and something tried and true: “We’ll do the Bush vs. Kerry flip-flop tack. [Warner] said he wouldn’t raise taxes, and he’s a liar,” Minnick said of the team’s approach to defeating Democratic senate candidate and former governor Mark Warner.

Speakers over the years at the campaign institute have included former Clinton strategist Dick Morris, now a Fox commentator; Charlie Cook and Jennifer Duffy of the Cook Political Report; and Stuart Rothenberg of the Rothenberg Political Report.