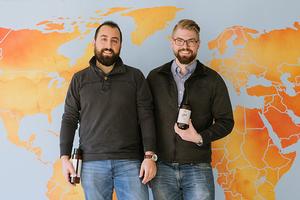 As entrepreneurs at the helm of the mission-based Soapbox—which donates one bar of soap for every bar sold—Dave Simnick, SPA/BA ’09, and Dan Doll, Kogod/BSBA ’10, were already busy before COVID-19 hit the U.S. But over the last few months, their entire business has changed—and they’ve been able to help countless more people as a result.

Soapbox began in 2009 after Simnick produced his first batch of soap in his college kitchen, not far from AU. Shortly after, he was back on campus auditing an entrepreneurship course. Doll, then in his senior year, also took the course. The two got to know each other and soon Doll was helping to develop the Soapbox business plan.

Some ten years later, Simnick is now CEO, and Doll serves as President and COO. Together, the pair has navigated product development, steady growth, building a team, and now, pivoting in the face of a pandemic.

Adding hand sanitizer to their product line was already on their radar (and in their R&D lineup) before COVID-19. And so was adding Starbucks to their client list—Simnick and Doll were in conversations about getting their soap into the coffee giant’s stores. So, in February, when Starbucks asked if Soapbox could make hand sanitizer, the pair made it happen. The very next day, as Wegman’s placed an order for 50,000 units of hand soap, they mentioned they’d also be interested in one million units of sanitizer. Other clients soon followed.

“In the course of a weekend, we sold millions and millions of units,” says Simnick.

At the same time, demand for their other products also went up. As word got around, hospitals and nursing homes reached out—and in its own way, Soapbox became part of the COVID-19 response.

How does a company with eight full-time employees and three contractors switch gears overnight? The same way it got started—with passion for their product and for helping those in need. The small but mighty team rolled up their sleeves and got to work. Currently, they’re operating with four facilities across the US “making sanitizer 24-7.”

Being nimble is part of Soapbox’s success. “We view ourselves as a startup,” Doll explains. “The analogy we use is that in our industry, everyone that is a multinational competitor is an aircraft carrier, and we’re a speedboat. We can make the pivots and direction changes more easily than some of the larger players.”

Another factor in their success? Trust and strong relationships. “When you have years of experience leaning on someone, it pays in dividends at times like these,” says Simnick.

Because of the increased demand, Soapbox is growing quickly—their current numbers put them among the top five or six brands in the country when it comes to hand sanitizer sales. As production grows, so does their reach in helping vulnerable communities. They’d already been working with Clean the World and Eco-Soap Bank, and they’re now partnering with a range of charities to donate their products, including Feeding America, Feed the Children, and Splash (among others).

To put it in perspective, they explain that in their 10 years of business, they’ve donated 10 million units; this year alone, they will double that number.

As they navigate change, Simnick and Doll say they’re honored to have the opportunity both to keep donating and to provide peace of mind for those who need their products. And all these years later, they still credit AU for helping to shape their vision and aspirations.

“One of the things I loved about AU is that it’s such a unique and specialized school,” says Simnick. “You go there because you want to make a difference, and you’re surrounded by students who care deeply about making the world a better place. We see what we’re doing, in a very small way, as helping to provide essential resources to those who need them most. We hope we’ve helped fulfill that mission of what we learned at American.”