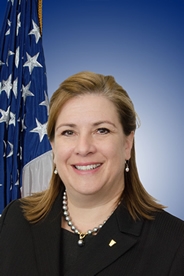 Jodi S. McCarthy (SPA/MPA ’10) has been appointed the Federal Aviation Administration’s (FAA) Director of Air Traffic Control Facilities as part of the Air Traffic Organization’s (ATO) Technical Operations Unit. She had been acting director since 2010.

Before joining the FAA in 1987, Ms. McCarthy was an Air Traffic Controller for the U.S. Air Force. She is a graduate of AU's Key Executive Leadership MPA Program and holds a Bachelor of Science Degree in Professional Aeronautics and Aviation Safety from Embry-Riddle Aeronautical University.