SPA Executive in Residence and Professorial Lecturer Capri Cafaro spent 10 years in the Ohio State Senate, including a stint as minority leader, and made a name for herself successfully shepherding bipartisan efforts through the process. “I would work across the aisle relatively frequently . . . I made it a tradition that every time we would have a legislative victory in a bipartisan manner, I would bring in a baked good to bring our offices together, in a way to build fellowship.” 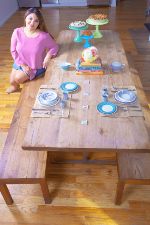 Those moments of camaraderie, along with an interest in national storytelling through regional culinary history, inspired Cafaro to assemble and author a cookbook entitled United We Eat: 50 Great American Dishes To Bring Us All Together, which was released in hardcover on July 4.

Cafaro compiled these recipes, adapted 26 of her own, and organized them into a narrative, complete with anecdotes about the political figures and the culinary history of their home states. She made personal appeals to those she knew, and then employed a “dragnet” to catch a wider selection of officials, to great result. People on both sides of the aisle wanted to help her make this point.

The experience motivated Cafaro to look for other projects based on this connection. “The process of putting this book together advanced my interest in storytelling around the intersection of American culture and food,” she said. A longtime advocate of food insecurity solutions, Cafaro is contributing a portion of the books’ proceeds to Feeding America, a nonprofit network of more than 200 organizations that feed more than 46 million people. She is currently brainstorming ways to raise awareness and funds for this issue using the unifying theme of the shared food experience.

She is also hosting a new radio show, called “Eat Your Heartland Out,” on the Heritage Radio Network, available for download in podcast form. The first season, which hit the air on July 2, explores what makes midwestern food unique through interviews with a diverse array of academics, anthropologists, food historians, cookbook authors, and restaurant owners.

“The combination of unique cultural and ethnic groups that populate the Midwest along with agricultural and migratory patterns have all contributed to the unique landscape that has created Midwestern food,” she said. “It is an interesting intersection of academia and storytelling.”

Cafaro finds the mission of solidarity in United We Eat to be especially applicable to AU students. “Particularly at a place like American University, which is so well-known for political engagement,” she said, “. . . you may feel very passionate about your political views, and you should, but it is also important to engage in civil dialogue and try to find those areas in which you agree, or even agree to disagree, but also to see people as more than their political affiliation.”

Cafaro, who began her relationship with AU in 2017, has taught courses in comparative health policy and child and family policy, joined panels, and delivered guest lectures for SPA and the Washington College of Law. When her spring course, PUAD-685, Child and Family Policy, was interrupted by the initial wave of COVID shutdowns, she quickly pivoted to highlight the germane issues. “We kind of threw the syllabus out the window,” she said. “I actually tried to make the best of it and integrated a lot of COVID-related federal policies into my course, [such as] the CARES Act and unemployment insurance.”

“At the core of the mission of United We Eat the cookbook is the simple notion that we all need to eat and that we all have some kind of tradition around food. It’s a way to bring people together and even humanize people you may not relate with. You may not like someone’s politics but you may like their recipe, and that’s a starting point,” she said.

You can learn more about Cafaro’s cookbook at www.unitedweeat.com. It may be purchased as a hardcover or an e-book from Amazon.