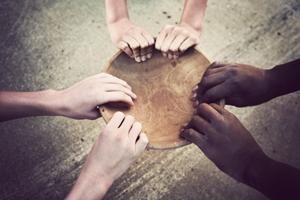 Food insecurity -- uncertainty about or a lack of consistent access to food that meets the needs of household members -- is a persistent social problem in the United States that affected roughly 14.3 million households in 2018 and nearly 14% of households with children, according to the U.S. Department of Agriculture. A new paper by researchers at the Boston University School of Social Work (BUSSW) and American University’s School of Public Affairs (AU SPA) confirms the negative impact of food insecurity on child health, suggesting the urgent need for policies to combat this problem.

“Previous studies have pointed to a negative impact of food insecurity on child health, but our paper uses rich, nationally representative data to rule out other explanations for this relationship,” says study lead author Margaret M.C. Thomas, MSW, doctoral candidate at BUSSW. “By comparing the outcomes of children in food-secure homes to those in food-insecure homes who were alike with respect to a large number of other factors, we have been able to more definitively characterize the serious negative health impacts of food insecurity.”

Published in the journal Pediatrics, the research by Thomas and colleagues Associate Professor Daniel P. Miller, PhD (Boston University), and Associate Professor Taryn W. Morrissey, PhD (American University), points to a unique and negative effect of household food insecurity on children’s health that is not due to the composition of their homes, the safety of their neighborhoods, or their household’s income or receipt of public assistance. Instead, it shows the pervasive negative impacts of household food insecurity on children’s health. “Household food insecurity was related to significantly worse general health, some acute and chronic health problems, worse health care access, and heightened emergency department use for children,” says Morrissey.

The team of researchers used propensity scoring (PS) methods to investigate the effects of food insecurity on children’s health by leveraging the inclusion of a measure of household food insecurity in the nationally representative National Health Interview Survey (NHIS). The NHIS data also include a rich set of background information about families including demographic characteristics, economic information, public program participation, and adult physical and mental health outcomes.

Thomas and her colleagues believe that their analytic approach is an important improvement over previous studies that use traditional regression methods. Using PS methods allowed them to better assess the causal impact of food insecurity on key domains of child health and health care use.

“Propensity scoring, a quasi-experimental family of methods, seeks to mimic the context of an experimental design by comparing outcomes among children who differ with respect to the household’s food insecurity but who are alike in all other observable ways,” Thomas says. “Because of the highly detailed information in the NHIS data, we were able to create a sample that is balanced with respect to known predictors of food insecurity.”

Data on the independent impact of food insecurity on child health helps guide efforts to prevent food insecurity and ameliorate its consequences. The researchers suggest immediate policy responses, such as an increase in federal SNAP (Supplemental Nutrition Assistance Program) benefits for families.