A new book, Cradle to Kindergarten: A New Plan to Combat Inequality, released today suggests that changes to America’s early childhood policies can improve the country’s competitiveness in the global economy. From parental leave, to childcare support, to universal pre-K, to a new formula for Head Start, the book’s authors outline evidence-based policy solutions that would help every child in the U.S. develop to his or her full potential.

“Our book lays out a comprehensive, achievable birth-to-five plan to intervene early and prevent the achievement gap before it begins,” said Morrissey, whose research centers on examining and improving public policies for vulnerable children. “Policy changes along these lines could drastically change the lives of children and their families – both in the short term, helping them manage work and family, and in the long-term, promoting education and lifelong success.” 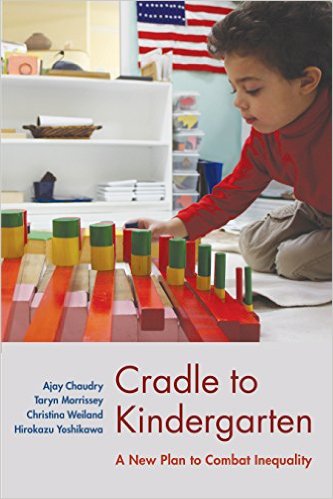 The authors’ proposals work in tandem to assure that all Americans under the age of five have the opportunity to develop their full potential as an adult: 12-16 weeks of partially paid parental leave, a childcare assurance or subsidy for low and moderate-income families, expansion of the Child and Dependent Care Tax Credit, universal pre-K starting at age 3, and a reconceptualized Head Start that focuses health and education interventions for infants and toddlers in areas of concentrated poverty. The authors also conclude that providing universal access to high-quality early care and education programs can lead to tremendous gains in school performance. The current inadequate support for young children and their parents hurts the country’s economic growth.

Morrissey argues that while the increased attention to the issue is important, the Trump maternity leave and childcare plans – 6 weeks for mothers only, and tax write-offs for childcare expenses – do little to expand access to opportunity. These benefits are inadequate and would go toward the affluent, who can already spend a lot on childcare —but do nothing for families who need the most help. By contrast, the authors’ proposals will improve access to and the quality of care for families across the income spectrum.

Morrissey worked with the three other scholars — Ajay Chaudry, Christina Weiland, and Hirokazu Yoshikawa — to assemble the book, which was published by the Russell Sage Foundation.

For more information about Taryn Morrissey, visit her bio.