“Targeted health programs are ineffective,” said Fullilove. “It’s not the right way to solve the problem.”

She explained that the landscape is more complex and with the Robert Woods Johnson Foundation, Fullilove, is developing new approaches to promote a culture of health in American cities. Research has led to her to focus on a variety of factors, such as education as it affects housing, income, and health.

Studying inner city neighborhoods, including Harlem and the Hill District in Pittsburgh, Fullilove said she has learned that the level of poverty and crisis cannot be addressed with separate, siloed campaigns brought in from outsiders. She spoke about “serial forced displacement” of diverse neighborhoods through urban renewal projects and lessons learned as low-income areas are undergoing development today. 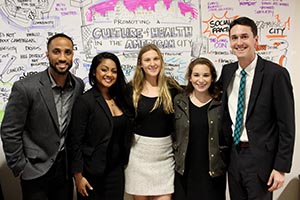 Improving health is about more than providing healthcare, said Fullilove. That is one of the underlying principles in the new approach to addressing the culture of health. Also, the effort needs to include everyone in the community.

“No one can be left behind,” she said.

Fullilove said county rankings underscore the need for broad solutions as they show employment, education and income account for 80 percent of health status in an area and healthcare just 20 percent.

First, there must be an agreement on the idea that health is important, she said. Just how to get there is unknown.

“We are inventing this together,” she said.

It’s a particular challenge at a time when the nation is “fractured” and hate has been legitimized, she added. Fullilove sees hope in some projects that leverage technology to promote civic engagement and agency, such as newly developed app for residents to report police violence.

Along with SPA Associate Professor Derek Hyra, Fullivlove is a studying the impact of gentrification in Orange, NJ, and Washington, D.C.’s Shaw neighborhood. The project, Making The Just City, uses leadership and training, which Fullilove says are encouraging new solutions in Orange as resources are shared and people are connecting. Upcoming events include a youth voices forum, block party at a local school, and music festival that showcases the diverse genres and communities. The situation may be complicated, but Fullilove said it’s important to pinpoint small steps and maneuvers toward the larger solution.

Before focusing on housing and community development, Fullilove was one of the first researchers to focus on place, rather than individuals, to reduce the prevalence of HIV/AIDS.

"In her latest book, Urban Alchemy, she inspires policymakers and scholars to think creatively about ways to bring people together to reconnect the fractured, urban social fabric," said Hyra. “She brings so many perspectives and hope into the community."

Christopher Thorn, SPA/’18, a double major in CLEG (communications law, economics, and government) and public relations, said he tries to attend a few of these events each semester and appreciates the outside perspectives, including Fullilove’s take on public health.

“I was astonished,” said Thorn. “I didn’t realize just how crucial education is – if you don’t have education, you have a whole host of issues.”

Thorn was also struck by the potential value of the music event in Orange, NJ that Fullilove described.

“I never put together how taking people’s specialties in music can elevate the community’s health – it is so interconnected,” he said.