In deciding with whom you should seek a meeting, you should know the roles and responsibilities of different individuals within government. The U.S. has a federal system, meaning that the national government creates one set of laws applicable to the entire nation, and state governments are free to create their own laws, so long as the laws do not conflict with the U.S. Constitution or other federal law. Below the state level is local government; states vary in how they are subdivided and in how much autonomy localities are afforded. At the national and state level, governments are divided between legislatures - which make law - and executives - who approve and implement law, mainly via agencies.1 In implementing law, executives and agencies often have considerable discretion over the details of how a law is carried out. Within legislatures, the bodies with which our research team is most familiar, elected officials employ many staff members, who handle most of the day-to-day work. Staff members fall into two general categories: personal staff (working directly for an elected official) and committee staff (working for a committee under the direction of elected officials who serve on that committee). Staffers often have considerable power to shape legislation.

While both personal office and committee staff conduct legislative research, their focuses differ. Personal staff tend to focus on their Congressmember’s priority issues, often linked to constituent interests, whereas committee staff work on legislation and hearings pertaining to their committee assignment.

Getting the attention and time of anyone working within the federal government (and many state and local governments) is not easy. Try not to be put off by the difficulties of gaining access. Policymakers are inundated with emails, phone calls, written material, and requests for meetings. Consider that each member of the U.S. House of Representatives represents a district made up of over 700,000 people. If a House member did nothing else but meet with constituents for 40 hours each week, granting each a 15-minute meeting, it would take over 80 years. Most U.S. senators represent even larger constituencies.

Persistence, and some strategy, does pay off. If you are a constituent or live nearby, you may want to begin with the local office. If you are not a constituent, begin with a staffer in the Washington, D.C., office whose portfolio of responsibilities includes your topic of interest. Keep in mind that you are likely to meet with staffers much more often than with elected officials. Such meetings are often as productive as meetings with officials. As discussed earlier, referrals by individuals close to, or respected by, the office will help, as will working through a well-established organization (e.g., a boundary or advocacy organization).

There are many different modes available for communicating with policymakers. While there are no general rules for which mode of communication to select (e.g., “always call, never email,” or vice versa), personalized communication that reflects more than a few minutes of time investment will normally have a greater impact. Examples of low-impact communication include adding your name to an online petition, sending an impersonal “email blast” to numerous offices, calling your representative or senator’s general Washington, D.C., number and giving an earful to the intern on the other end, or tagging a policymaker in a social media post. This is not to say that these quick communications are not worth doing, however, as offices do monitor general trends in support and criticism.

Higher-impact communication would include an email to, or phone call with, a staff member who handles legislation in your area of concern, any in-person meeting, and special events to which the policymaker is invited. Note that first meetings tend to be short, informal, and conversational; be on time, be flexible if a policymaker is late or called away, and bring a one-page document that efficiently conveys your key points. Once you have developed a relationship with an office, you may be asked to help them persuade other policymakers. You may be asked to brief other offices, testify at hearings, or assist with “Dear Colleague” letters or letters to federal agencies. Similar rules apply to the executive branch, although there you have an additional formal opportunity to weigh in: Federal agencies are required by law to field comments from the public on proposed rules during a public comment period.

The Members of Congress and staff we interviewed tended to recommend in-person meetings. More than one interviewee suggested meeting with Congressmembers in their home district office or at informal community events, where they may be more relaxed.

Be sure to bring a shareable “one-pager”—an overview of what you will be speaking about, with bullet points, headlines, and colorful images. Learn more about crafting a great one-pager. 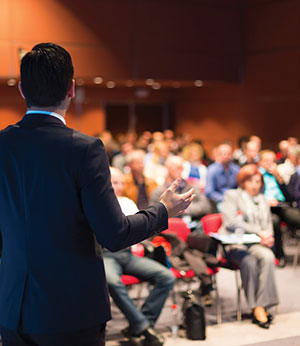 Every policymaking body operates on a specific schedule, and it is critical to be aware of it. For example, the U.S. Congress is sometimes in session and sometimes out of session; the schedule is assembled, and published, at the beginning of each year (though it can change).

If time is not of the essence, out of session can be the best time to seek a meeting: The pace of the members’ and staffers’ schedules will slow somewhat. Note two important details, however: During recesses, most members of Congress will be in their home district, not D.C.; also note that many staffers take their vacations during the longer recesses.

There are other schedules that may impact the timing or content of interactions. Elected officials likely will not be available for nonessential meetings in the several months before an election (if it is a competitive one); however, some staff may be. Remember that representatives are up for election every two years and senators every six. It is helpful to understand the timing of the appropriations process as well, which typically begins in February and can continue throughout the year, or be completed at different times for different clusters of agencies.2

Finally, every piece of legislation has a life cycle: To shape the policy, share important information early - ideally as it is being drafted.3 Once legislation has been reported out of committee, your efforts are less likely to have a significant impact. Finding out when legislation is in its beginning phases requires some time investment. You can monitor relevant committee activity via Congress.gov, follow publications and policy-related alerts (such as the AAAS Policy Alert) from a scientific society, or draw on relationships with advocacy organizations or Congressional offices.

Communicating in a Political Context