To honor this year’s Veterans Day, American University is holding several events in the coming week.

AU’s 2nd Annual Veterans Day Ceremony will take place on Friday, November 10. It will be held on the Quad, from 9:30 a.m.–10:30 a.m. The ceremony will feature a Presentation of Colors by ROTC, recognition of student vets who are graduating, and remarks from AU community members. Sponsors include the AU Student Veterans Association, ROTC, the Veterans Liaison Network, the Veterans Alumni Network, AU Staff Council, and the Kay Spiritual Life Center.

On Tuesday, November 14, at 12:00 p.m., American University Washington College of Law will host a special Veterans Day Flag Dedication and Reception at the Yuma Entrance Flag Pole. On Wednesday, November 15, from 6:00 p.m.–8:00 p.m. in Kerwin 2 (the old Ward Circle Building) University College is holding a speaker event with Justin Eggen, a Marine Corps veteran whose new book of poetry and short stories is based on his military experiences.

According to figures from veteran services in AU Central, 421 AU students are currently using AU VA education benefits. 283 of those students are either veteran, active duty, reserve, or National Guard, and the remainder are dependents and spouses. In advance of AU’s Veterans Day events, University Communications is featuring four members of the AU community who have served their country—a senior administrator, a faculty member, a law student, and an undergraduate. Here are their stories:

While discussing his 30 years of Air Force service, American University athletic director Billy Walker vividly recalls his green beginnings. As he left home to attend the United States Air Force Academy, it was the first time he’d ever been on an airplane. 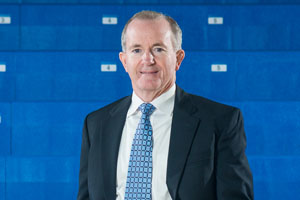 “I’m thinking, ‘I’m going to eventually become a pilot, and I don’t even know if flying is going to scare me. I hope I’m making the right call here,’” he says now.

Yet coming from a large, working-class Wisconsin family, going to the Air Force Academy was a golden opportunity worth seizing. He turned out just fine on that commercial flight, and he’d eventually become a command pilot with nearly 3,000 hours of helicopter flight time.

Walker’s helicopter flying brought him to Andrews Air Force Base for a job transporting high-ranking government officials and conducting classified missions. After his first assignment there, he’d later return as the commander of the 1st Helicopter Squadron. Over the years, they’d transport Vice Presidents Dick Cheney and Al Gore, as well as cabinet secretaries, foreign leaders, and other dignitaries. He occasionally carried a Civil War almanac in his pocket, showing aerial views of famous battlefields to some passengers.

Aside from the VIP interactions, Walker especially appreciated leading young men and women in this squadron. “Being entrusted with America’s youth, as a commander, was one of my greatest honors,” he says. And he feels the same gratitude for other veterans he’s served alongside. “It was great just seeing the sacrifice, and the intense loyalty and devotion. To be around that for 30 years was really special.”

Walker had a rewarding experience as commander of a small squadron in the Cheyenne, Wyoming, area. This makes for difficult flying, as helicopters have less power in these high-altitude regions. In two years, they got 82 rescue calls, saving many lives and providing assists to people in perilous situations.

Along the way, Walker earned his doctorate in physical education and sports administration at the University of Northern Colorado. He was an assistant wrestling coach at the Air Force Academy and ultimately became deputy director of athletics there. In 2013, he started as AU’s athletic director. If this position looks like a dramatic departure, he sees some positive similarities.

“A lot of our students here are service-oriented. They’re obviously focused on their academics. There are tough, hard-working student athletes,” he notes. “You have so many people going into the Peace Corps or the Foreign Service. You get the same kind of mindset.”

Michael Carberry, Executive in Residence at the Kogod School of Business

There’s an oft-repeated notion about the Vietnam War. College students avoided fighting, while working-class kids without degrees were shipped off to war. College attendance certainly led to many draft deferments, but the generalization is belied by people like Mike Carberry. He volunteered for a Marine program while attending Manhattan College, and he headed to Vietnam after graduating. 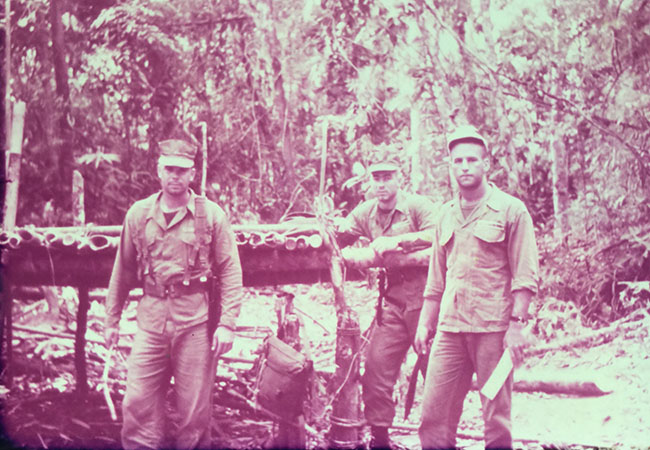 “I grew up in the Bronx in New York, and most of my friends went into the military, voluntarily, when they got of age,” he recalls. “I wanted excitement, adventure, action. So, this was something I was looking to do.”

Between 1964–1966, Carberry did two tours in Vietnam. These days, he keeps a reminder of his service near his desk in Kogod. It’s a New York Daily News clip about a mission he participated in south of Saigon. When two Daily News journalists showed up at his parents’ house looking for a photo for the article, his mother became extremely upset.

“She thought I had been killed. That’s why she thought they wanted the picture,” he says now. At the time, Carberry hadn’t told her he was on the ground in Vietnam. “I would send her notes saying, ‘Oh, things are fine. We’re in the Philippines, or we’re offshore,’” he explains. “I didn’t want her to worry. I knew she worried all the time.”

Carberry returned to the United States and earned his MBA at Columbia University, an anti-war hotbed. He was there in 1968, the same year protests led to a university-wide shut down. As polarizing as the war became—and five decades later, the societal wounds are still open—Carberry remains grateful he had the chance to serve. “I was proud of being in Vietnam, and I’m just proud of being a Marine.”

He went on to have a successful career in advertising and public relations. He was an adjunct professor over the years before joining AU full-time in 2010. Now he’s an executive in residence in Kogod’s Marketing Department, and he’s a faculty adviser to AU student vets.

Growing up in small-town New Hampshire, Jen Goss never thought much about attending the United States Naval Academy. When a guidance counselor proposed Annapolis in a meeting with Goss and her mother, they laughed at the idea. Yet her grandfather had graduated from the Naval Academy, and after meeting with members of the Naval Academy women’s sailing team, she visited the school and had a change of heart. The rest is history. Or, for Goss, likely just the beginning.

“I love the Navy. I would not change anything about my experiences all the way through. Even the experiences that were not so great, those things make me better at what I’m doing now, and they make me stronger,” says Goss, now a second-year student at AUWCL. 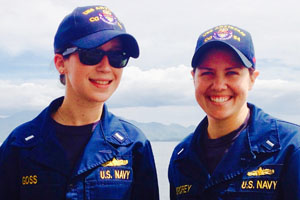 After earning her undergraduate degree in English from the Naval Academy, she completed five years of Naval service. On the USS Kearsarge, she was deployed to the Middle East and served as a deck and auxiliaries division officer. She oversaw refrigeration and air conditioning, which was important in such a hot climate. On the USS Antietam in Japan, she was a force protection officer dealing with security of the ship.

Goss had supervisory roles over many sailors, and captains frequently conferred with her about challenges she might face. “They’d give me this talk about being able to talk to people and stand up in front of a room. I think they see this petite-looking person and think, ‘Are you able to really do this?’” she recalls. “It’s funny because every single time, after I’ve been there for a few months, they always end up pulling me aside again and saying, ‘I don’t know why I ever worried about you.’”

Getting that seasoning proved beneficial to her in workplace environments and at AUWCL. “I’m pretty confident that if I walked into a room right now, and I was told that I need to take charge of this group of people, I’d be able to do it,” she says.

Now a Navy reservist, she’s still interested in pursuing a military career. Next semester, she’ll do a JAG Corps internship at the Washington Navy Yard.

Kevin Frazier, undergraduate student in the Kogod School of Business

After five years in the U.S. Marine Corps, Kevin Frazier feels like a different person. Before enlisting, he was taking community college classes, yet he felt like he was treading water. The Marines Corps’ mix of discipline and camaraderie helped him in numerous ways. 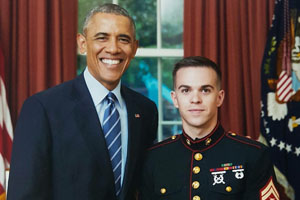 “It’s very cliché, but it really did shape me into a better man,” he says. “I got a great work ethic. I gained a lot of leadership skills and following skills.”

A Napa, California, native, he went through schooling and training before moving to Washington to do security work at the Marine Barracks, as part of the White House Communications Agency. He then spent a year and a half at the huge Marine Corps Base Camp Pendleton in the San Diego area.

Even the most grueling aspects of Marine Corps duty had an upside, he found. “I think the bonds you formed could be directly correlated to the miserable conditions. The more miserable it is, the tighter you get with people,” he says.

“The best part of service was meeting all the people and being in really tight-knit groups. The worst part was having to leave those groups, when you get re-stationed somewhere. Or the hiking. Hiking sucks,” he jokingly adds.

Frazier is new to AU, transferring in 2017 for the spring semester. At the Kogod School of Business, he’s majoring in business administration with a specialization in information technology and systems. He’s still adapting to college life as a slightly older, nontraditional student. But he’s now involved with the Student Veterans Association, and he’s helping with the November 10 Veterans Day ceremony on the Quad.