A hybrid of online and classroom-based learning, AUx2 courses are facilitated by instructor-advisors and student peer leaders. For a window into the AUx2 pilot courses, University Communications and Marketing interviewed two facilitators who worked together, Andrea Malamisura and Brazil McCray. Malamisura is a full-time AUx instructor-advisor, and student peer leader McCray is a rising third-year biology major. This interview has been condensed and edited for clarity.

UCM: Early on, you ask students to explore their own identities. Did students feel comfortable opening up and talking about themselves?

McCray: In the first class, people started to get to know each other. As the semester progressed, they got way more comfortable sharing with each other, and I don't feel like there was any problem in the beginning of the course. We did explain that it's a safe space, and whatever is said here doesn't leave here.

Malamisura: I think it also probably helps that we start introducing some of that identity work at the end of the fall semester. They've all been through a full semester of AUx1, with that discussion-based format. So they sort of know what they're going into when they walk into an AUx2 class.

UCM: How did you talk about issues of class and privilege? And how did white students grapple with privilege?

McCray: I think since this may be the first time students are shown their privilege, it can be shocking. Especially reading their exit cards, students reflected on how they should speak out for others who may not have a voice. We also showed that students who have oppressed identities still have some privilege and power because they have access to education. I don't think anyone was really uncomfortable by anything that we were teaching, especially since we tried to make sure that we were very inclusive. We weren't pinpointing, 'Oh, because you are X, Y, and Z, you have so much more privilege over this person.' We weren't pointing fingers, we were just laying it all out. 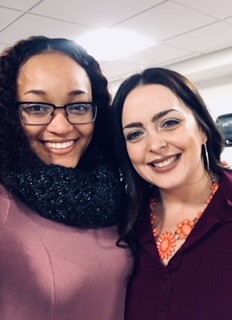 UCM: The historical section of the course is extensive. The topics you cover include slavery and Native American exploration, abolition and the women's movement, immigration, etc. Was it difficult to cover so much ground?

Malamisura: We have to be very intentional about making sure we're not glossing over these issues. We have to highlight the importance and the historical significance of each of those weeks. And it's still not possible. You could pick out any of these weeks and make it an entire semester's course. So that is a little challenging. But I think that middle part of the semester is where I started to see the most growth and change in our students. I think so much of the learning that was happening was the unlearning of what students had been exposed to previously. The gaps in their high school education, and things that they had never been exposed to. Especially the Native American week. So much of that was just brand-new information and you could see their minds expanding. 'Oh my gosh, this was completely left out of my history books.'

UCM: What other part of the history section generated lively discussions?

Malamisura: We do a whole week on Emmett Till and the emergence of the modern civil rights movement, and I think that one really resonated. Some students in the class had never heard of Emmett Till, so that was a big shock for them. But then we really got into some good discussions about how these sorts of things are still, unfortunately, happening today. And they were able to draw parallels for themselves.

UCM: You mentioned gaps in student education. Do you believe students are not adequately prepared for these issues during their high school years?

Malamisura: We actually talked about that in class-what students had previously been exposed to. And they learned so much from each other, not just from Brazil and me. They learned so much in small group discussions. But they were also aware that maybe not everybody is coming with the same background knowledge. And I think one of the biggest hurdles for us, as a teaching team, is meeting all the students where they are. Because we have some students who are brand new to some of this information, and we've got some students who live their everyday lives exposed to this information. So bridging that gap is one of the tougher challenges for us. But the students are really good and patient with each other.

McCray: We had a great class, and we always say that we were so fortunate to get this group of students who were willing to learn. Even though they were all on different levels, they were all just willing to learn not only from us, but from each other. So that made it easier on our part to get the message across.

UCM: Was the immigration lesson touchy, given that it has become a partisan political issue?

McCray: For some students, yes. Just because of their own experiences and their own family background. It was a little bit challenging for those students. And other students can see that the immigration issue is not only affecting one person-it affects their entire family, their community. But one thing I would like to note is that, in every class, we made it a point to tie in current events. We gave them the historical context behind it, so that they would better understand why certain events are occurring now.

UCM: The third section of AUx2 was about turning theory into practice. Do you think students seemed committed to taking what they learned and adopting those ideas on campus?

Malamisura: I really do, and we obviously can't take full credit for that. Every class, they submit an exit card, which is 'What's your takeaway from today's class?' And I think one of my prouder moments was in the last class. A lot of them wrote, 'This is my takeaway, and this is what I plan to do with it.' And they wrote about how they planned to use their privilege to lift up voices of marginalized communities.

McCray: We had our allyship week later in the semester. You can tell that students were sort of mind blown by this idea. Their previous thought process on allyship wasn't what we were teaching in class.

UCM: What were their previous notions, and what were you pointing them toward?

McCray: They were saying 'ally' as a noun, like 'I am an ally.' But they weren't necessarily taking the steps to be an ally. It was sort of passive. We'd say, 'Ally is a verb. It's an action.' It's not just labeling yourself as an ally.

UCM: What are some ways you discussed turning 'ally' into 'allyship,' and making it a verb?

McCray: Actually going up to somebody and saying, 'I stand with you if you ever need anything.' Or if you're in a situation where one person commits a microaggression toward someone else, you allow the person to speak for themselves first. And if they're unable to, you can ask them, 'Is it OK if I say something?' Or off to the side, maybe say, 'I didn't mean to step over you. I just wanted to make sure that this person wasn't making you feel uncomfortable in this space.'

UCM: Were there any tense moments among students during class?

Malamisura: We got very lucky, I think, not only with how well we worked with each other, but also with the dynamic of students in our class. Like I said, there were students from very different backgrounds coming in. And I think some facets of some identities didn't necessarily come out in class discussions, but in their writings. And by the end of the semester, everybody seemed to be on the same page, and everybody was open to hearing viewpoints regardless of where they're coming from.

McCray: I think what helped was that if we noticed that a conversation was leaning one way, we always referred back to our 'class agreement' and said, 'This is a safe space. Be mindful of what you're saying, even if you are leaning toward one area of the political spectrum. Maybe don't say certain things in class that might be hurtful to someone, because you don't know what their political views are.' Whenever we said that, which I think was only once or twice, it really helped defuse the situation. For the students who did have opposing views, I saw them relax a little. We are a very liberal school, but you do have students who are more conservative. So we have to make sure that they have a space and they have a voice.

UCM: What's the best reason for having an AUx2 course at American University?

Malamisura: I think, unfortunately, this particular material is a huge deficit in a lot of university curriculums. And if, as a university, we are truly committed to developing productive human beings, it's hugely important that everybody has the skill set to foster inclusive environments and learn about other identities.

McCray: We're coming to college so that we can be professionals in a certain major. But when you step out of college, I think it's important to be able to have conversations with people who don't necessarily look like you. At least from my perspective, that's why this course is so great. We're able to learn, so you step out into the world with a different perspective than when you entered college. Personally, if I had never taken this course and never helped teach it, I wouldn't be able to have those relationships with people who don't look like me. And I have them now. So, just learning to have those uncomfortable conversations, not overstep boundaries, and understand how people's experiences really shape who they are. I think that's what we focus on in the course, and that's something that really needs to be taught.