In his seminal speech about African Americans and the Fourth of July, Frederick Douglass said, “We have to do with the past only as we make it useful to the present and the future.” American University professor Ibram Kendi expressed that sentiment on Thursday night, at a special gala hosted by AU’s Antiracist Research and Policy Center and the Frederick Douglass Family Initiatives. 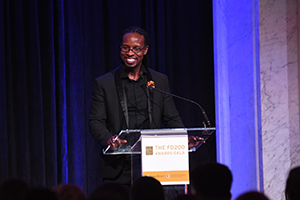 In stressing the nexus between history and contemporary action, Kendi echoed Douglass’ words to underline the purpose of this initiative: “We thought, ‘What if we assemble those Americans who are publicly and privately plowing the ground, thundering and lightning, and roaring waves of progressive human change? We thought, ‘What if we assemble 200 people who embody the spirit and work of Frederick Douglass?’”

The FD200 Awards Gala, held on February 14 at the Library of Congress, was the culminating event to honor 200 people whose modern-day work reflects the legacy of Douglass. The Antiracist Research and Policy Center and the Frederick Douglass Family Initiatives—founded by Douglass descendants—launched this project last year, during the bicentennial of Douglass’ birth.

Among those in attendance on Thursday were Black Lives Matter co-founder Alicia Garza and authors Sandra Cisneros and Naomi Klein.

“I salute you in the struggle for a better world, for an equitable and peaceful world, for a just and living and loving world—for the type of world where freedom for those people we fight for each day no longer feels like a form of slavery," said Kendi, according to prepared remarks.

Nettie Washington Douglass and her son, Kenneth B. Morris Jr., are co-founders of the Frederick Douglass Family Initiatives. They are descendants of Douglass, as well as Booker T. Washington. At the event, Morris talked about his group’s work to stop human trafficking, and the meaning of his family name.

“I believe that this evening adds to the compelling proof of the indelible and growing influence of Frederick Douglass’ legacy in the US and around the world,” Morris said.

A Force for Light

In her appearance, AU president Sylvia Burwell celebrated Douglass’ Fourth of July speech. “Douglass delivered one of his most searing and impassioned speeches—one forever part of the nation’s conscience. Decrying the duplicity of that day’s celebration in the shadow of slavery, Douglass tore the veil that separated the nation’s rhetoric from its reality,” she said, according to prepared remarks. 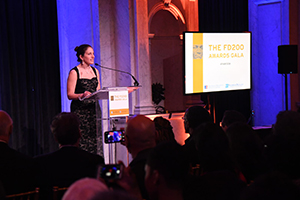 However, Burwell pointed out, Douglass concluded his address stating a firm belief that change would come. She quoted Douglass: “’The fiat of the Almighty, Let there be light, has not yet spent its force.’”

She noted that she sees reasons for optimism, through both the FD200 honorees and people in the AU community.

Burwell provided examples of AU’s long history of work for equality: the American University Washington College of Law was established by two women in 1896; the Frederick Douglass Distinguished Scholars program gives scholarships to many minority and first-generation college students, who then help underserved communities; and the Antiracist Research and Policy Center aims to dismantle policy structures that prop up racism.

“This work toward change—our efforts to be a force for light—have to be shared efforts,” she said. “That’s why I’m so honored to join with these inspirational honorees, with the many engaged and committed attendees in the audience tonight.”