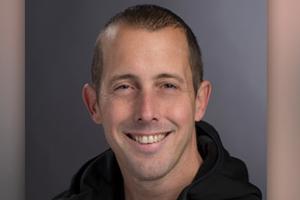 Andrew Phelps appreciates games because they encompass his twin interests of art and technology.

Andrew Phelps, a new School of Communication professor and director of the AU Game Lab, is both artistically inclined and tech-savvy. But Phelps wanted a medium that could incorporate both worlds.

“I’m this guy who started in art and moved into tech, and I’ve never felt wholly at home in either one of those. And games, to me, are that: Games are a form that span these different areas,” he says. “So I think that’s one of the reasons why I like them so much.”

The AU Game Lab is a place where Phelps can tap into his own creative energy, while guiding and supporting others. Phelps comes to AU from Rochester Institute of Technology, where he taught for the past 20 years.

Phelps is of a certain Generation X age, where kids grew up waiting for the next video game to come out. In the 1980s, the first significant home game consul was probably Atari 2600. “That is now the touchstone of my childhood: Space Invaders and dirt bikes,” he recalls. “I remember playing Pac-Man in the arcades, and then I remember when Nintendo came out.”

It wasn’t long before he wanted to design the action himself. “I started monkeying around on a computer trying to write stuff in probably about eighth grade,” he says now. “I tried to make a Star Trek game, just reading DOS manuals.”

By his own account, his Star Trek experiment turned out horribly, but he got that early exposure in game development. However, his childhood was mostly defined by swimming. Phelps’ father worked in human resources for a large company, meaning their family moved early and often. But Phelps stuck with swimming and eventually was a high school All-American in Fairport, New York.

“That’s what I did all day. School was sort of like this thing that you did in between swim practice,” he says.

He got a scholarship to swim at Bowling Green State University in Ohio.

At Bowling Green, he was majoring in painting and, at the time, had an extremely niche career goal: illustrating fantasy book covers. But someone pointed him in another direction. “They showed me a computer and said, ‘you can do animation on it.’ So I started doing computer animation, and I started freelancing in the area. Doing both interactive media work, and a little bit of games work,” says Phelps, who added another major in computer art.

The rest, he says, is history. Hoping to improve his computer programming skills, Phelps went straight into graduate school for information technology at Rochester Institute of Technology. He earned his master's degree and started working as a TA before a faculty position opened up. Early on, some students heard about Phelps’ gaming interests and asked him for help.

This is the first time Phelps has lived in DC, but he’s not unfamiliar with the business of government. During the Obama years, Phelps and some colleagues were invited to the Eisenhower Building to discuss national policy on games. And a thank-you letter hangs on his wall from the late Rep. Louise Slaughter, D-N.Y., for an app challenge he helped run to encourage young people to study STEM. He’s also been pulled into policy debates over games—including defending games against the oft-stated, but unfounded, claim that they cause gun violence.

Phelps is now getting to see some DC sights and cultural institutions. He doesn’t swim anymore, opting instead for running in Rock Creek Park. Even running a half-marathon is more of a relaxed activity, he says. “I let myself be slow at it. This is a thing I can do where I don’t feel I have to be competitive. Whereas I’ve tried three or four times to go back to swimming, and every time I get in that mindset of, ‘what’s my time? How will I start shaving seconds off?’ I start to think, ‘this is silly.’”

In addition to directing the AU Game Lab, he’s still designing his own games. It can be quite time-consuming—taking from 18 months to two-and-a-half years. “They’re intense,” he says. “Those are my books, in a certain sense.”

In a nod to his painting background, his computer art even mirrors fine art. One game he created, Splattershmup, allows the user to make a Jackson Pollock-style painting.

“That game was fun because a lot of people played it and said, ‘oh, I didn’t know a game could be arty like this,’” he says. “That one might be my favorite. But I’ve loved them all, because you invest so much of yourself in making them.”