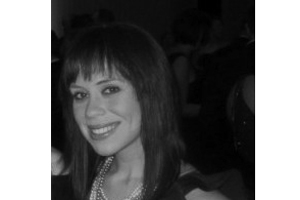 It’s hard to imagine that anyone’s dream job would require waking up at 3:20 every morning and being in the office at 4:15. But when the job includes meeting celebrities and being a part of one of the most popular morning shows in Washington, D.C., it’s easy to look past the early mornings.

Aly Jacobs, SOC/BA ’07, landed her dream job after interning for local radio stations WASH-FM, Hot 99.5 and MIX 107.3, which she found at AU’s Job and Internship Fair. At MIX, Jacobs served as a promotions intern until the host of the “Jack Diamond Morning Show” asked her to come on the air.

“Jack Diamond came up to me and said, ‘Hey, can you come on the air and say five things you shouldn’t do on a first date,’” she said. “I had never done anything like this before but I did that one day, and then the next day he came back and asked me to do something else.”

After that, Jacobs began regularly sitting in on the show and was made ‘traffic girl’ and an on-air personality, talking about celebrities and fashion. She also writes Fashion Fix for the station’s blog.
“It’s a rare story, and I know I’m very lucky,” she said.

It’s not all about meeting celebrities like Adele, Katy Perry and Lady Gaga. For Jacobs, it’s also about the impact she gets to make in the community. She’s been able to help raise money for the Children’s National Medical Center, and she volunteers at the Washington Humane Society.

Jacobs also loves the chance to interact with listeners and helping them by sharing her personal stories.

Jacobs says this was all made possible through her classes and time at AU, and especially Professor Jill Olmsted’s class.

“In class, she was always so hard and so critical, and I’m so thankful she was,” she said. “I went from being this girl who would stumble over words and cry, and she was tough on me and said, ‘You can do this and you will do this.’”

Jacobs says that young graduates need to remember that getting their dream job doesn’t just happen in a day.

“I had to do a lot of busy work and do a lot of Excel spreadsheets and databasing and calling listeners,” she said. “It does happen if you put as much effort into the spreadsheet as you would interviewing Ashton Kutcher on the red carpet. You need to put 100 percent into everything, but don’t take yourself too seriously.”