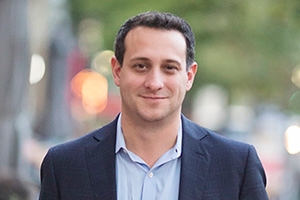 Bram Weinstein, SOC/BA '95, has always known what he wanted to be: a sports broadcaster. "I was the kid that sat in front of his TV and pretended to call games," he says. When it came to choosing a school to help him follow his dreams, American University was one of his top picks. "I had my heart set on AU because it was a great broadcasting school and I knew what I wanted to do," Bram says.

These days, Bram hosts a radio show, ESPN 980, which is on-air every day. On top of that, he plays a part in a long list of other projects, including a podcast on sports and technology called SportTechie and working with Comcast Sportsnet to do game coverage for the Wizards. He also owns the company Reel Media Group, which does media and broadcast training.

Throughout his career, Bram has had experiences and opportunities his childhood self would have trouble believing. "I'm a huge Redskins fan, and through my job I got to host a show with Joe Gibbs. He is the greatest coach in Redskins history, and I got to do a weekly show with him." Another point of pride was appearing in an ESPN SportsCenter commercial broadcast on national TV.

His story, however, starts at AU. "The school helped me get internships I would never had anywhere else, and a classmate at AU got me my first on-air job," he says. Now his career has come full circle. "Here I am 20 years later working at the same station I interned for."

Bram hopes to pass on his passion to other kids who, like him, sit in front of the TV dreaming about their futures. His work with Reel Media Group helps aspiring broadcasters with coaching, training, and career advice. He says, "if you can communicate effectively, it will move you forward no matter what you do."