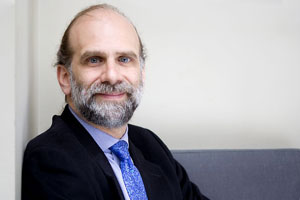 A regular columnist for the Wall Street Journal and the Guardian newspaper in the UK, Schneier calls himself "an explainer." Through his best-selling books, Applied Cryptography, Secrets and Lies, and Beyond Fear, and countless mainstream and security media articles and speaking engagements, he explains difficult topic matter to regular folks. His reputation as a leading cryptographer even got him mentioned in Dan Brown's mega-bestseller, The DaVinci Code.

Schneier's 2008 book, Schneier on Security, offers insight into everything from the shortfalls of airport security and the dangers of identity theft to the long-term security threat of unlimited presidential power and the amazingly easy way to tamper-proof elections.

Hailing from New York City, Schneier majored in physics at the University of Rochester and then came to D.C. to work for the government at the U.S. Naval Station on Nebraska Avenue. While doing computer security work, he decided to get a graduate degree in computer science – which was as easy as walking across the street to to AU for classes.

Schneier then moved to Chicago, where he worked for AT&T Bell Labs. After getting laid off in 1991, he had two choices: Take the severance package and panic, or make something out of it. He turned to writing – technical books for industry insiders and engaging articles "even my mother could understand" for the popular press.

Schneier is regularly quoted in the media and has written articles for the New York Times, Forbes, Wired magazine, and CNN, and his articles have been translated into several languages. He has been featured on "60 Minutes" and has testified on security before the U.S. Congress.

For the past 10 years, Schneier has published a free monthly newsletter, Crypto-Gram, which--along with his blog--has more than 250,000 readers. He says the biggest compliment he receives is when someone tells him, "You have changed the way I think."

Officially a resident of Minneapolis, Schneier says he is most often found "in O'Hare Airport, changing planes" on his way to yet another speaking engagement.